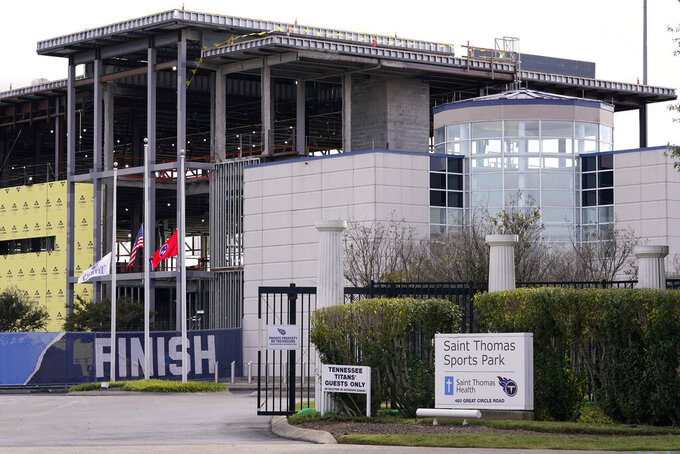 FILE - In this Tuesday, Sept. 29, 2020, file photo, the entrance to the Tennessee Titans' practice facility is shown in Nashville, Tenn. A person familiar with the situation says the Tennessee Titans have their second straight day without positive coronavirus tests, giving them the potential to reopen their facility Wednesday after the NFL’s first COVID-19 outbreak. The Titans had no positive tests Monday and continued that trend Tuesday, Oct. 6, 2020. (AP Photo/Mark Humphrey, File)

New York Jets players and coaches have been sent home from their training facility after a presumptive positive coronavirus test, a person with direct knowledge of the test tells The Associated Press.

The player was retested and the results should be known later Friday, the person said on condition of anonymity because the NFL and the team have not released the information. If the second test comes back negative - it happened to Matthew Stafford in August - then he is not positive.

The lab used by the league is near the Jets' facility in Florham Park, New Jersey, so the retest result should come relatively quickly. Even if it is a positive, the NFL doesn’t necessarily need to adjust the scheduled game Sunday with Arizona. The league has had 60 cases since testing began in which one player or staff member tested positive and there wasn’t further transmission among the team.

By sending everyone home from the facility Friday morning, the Jets took the appropriate steps under the NFL/NFLPA COVID-19 protocols.

“As of now, it’s business as usual," Arizona coach Kliff Kingsbury said. "We’re heading out today and getting ready to play on Sunday until told otherwise.”

The Tennessee Titans got some good news Friday with no positive test results hours after the NFL rescheduled their game with Buffalo to Tuesday night, a person familiar with that situation told The Associated Press.

The Titans' outbreak increased to 23 on Thursday with 21 positive results returned since Sept. 29. Now the Titans have gone three of the past five days without a positive test after the latest results, according to the person who spoke to the AP on condition of anonymity because neither the NFL nor the Titans announced the latest results.

The NFL announced Thursday night that the Titans (3-0) will host Buffalo (4-0) on Tuesday. The league already postponed, then rescheduled the Titans’ game with Pittsburgh from Oct. 4 to Oct. 25 during the outbreak.

The Bills had been preparing and practicing all week for a Sunday game in Nashville. With the NFL rescheduling their game with Tennessee, the Bills announced they will not practice or have any availability Friday.

The league also rescheduled New England’s game with Denver from Sunday to Monday.

“These scheduling decisions were made to ensure the health and safety of players, coaches and game day personnel and in consultation with medical experts,” the NFL said in a statement Thursday night.

Five games now have been rescheduled because of the pandemic: Pittsburgh at Tennessee in Week 3 was moved to Oct. 25 with Pittsburgh-Baltimore also switched from Oct. 25 to Nov. 1. The Patriots now will play on Monday night for a second straight week after their game in Kansas City was postponed a day.

If the Titans' testing allows Tennessee to host Buffalo on Tuesday, the Bills' prime-time game against Kansas City in Buffalo will be moved from Thursday to the weekend. That would be the sixth NFL game to be rescheduled — all this month.

The Patriots worked remotely again Friday after reigning NFL Defensive Player of the year Stephon Gilmore joined quarterback Cam Newton on the reserve/COVID-19 list Wednesday. New England also has a defensive tackle from the practice squad on the list in the league’s other mini-outbreak.

The NFL told the Titans to close their facility on Sept. 29, and their last game was a 31-30 win over Minnesota on Sept. 27.

NFL Commissioner Roger Goodell warned all 32 teams Monday that following league protocols is mandatory and that violations forcing changes in the schedule could lead to being stripped of draft choices or even forfeiting games. The NFL also updated protocols on Oct. 2.

The Titans’ outbreak increased to 23 Thursday with tight end MyCole Pruitt and a defensive back from the practice squad put on the reserve/COVID-19 list Thursday afternoon. The Titans’ facility remains closed with the team still prohibited from any in-person activities.

Tennessee currently has 13 players on the reserve/COVID-19 list, including four starters and a long snapper.