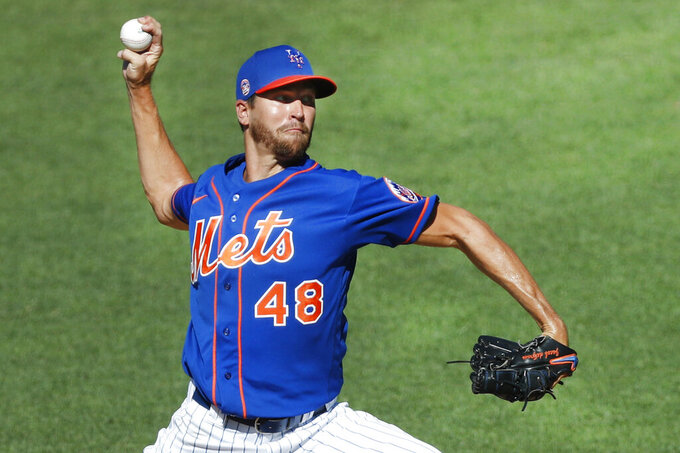 FILE - In this July 9, 2020, file photo, New York Mets starting pitcher Jacob deGrom winds up while delivering during a simulated baseball game, part of the Mets summer training camp workout, at Citi Field in New York. Pete Alonso at the plate. Jacob deGrom on the mound. And a healthy Yoenis Céspedes pegged conveniently for designated hitter. There’s no question the New York Mets have reasons to believe this pandemic-shortened season is perfect for them -- even without injured starter Noah Syndergaard. All they need to do is pick right up where they left off last year.(AP Photo/Kathy Willens, File)

NEW YORK (AP) — Jacob deGrom and the New York Mets averted a serious scare Wednesday when an MRI showed nothing to be concerned about, according to a person familiar with the situation.

The person spoke on condition of anonymity because no immediate announcement on deGrom's medical condition was planned. The two-time Cy Young Award winner was sent for tests after exiting an intrasquad game early with tightness in his back.

Mets manager Luis Rojas said a frustrated deGrom left Tuesday night's camp outing after only one inning at Citi Field. He is day to day.

Any significant injury to deGrom would be an enormous blow to New York during a season shortened to 60 games due to the coronavirus pandemic. The right-hander had been scheduled to pitch in an exhibition tuneup this weekend against the Yankees and then start on opening day July 24 versus Atlanta — but all that could change now.

“It’s a little bit too early still to make those decisions," Rojas said Wednesday afternoon. “We’ll have to see what comes out of the MRI.”

The Mets already are minus No. 2 starter Noah Syndergaard, who will miss the entire season following Tommy John surgery.

Last year, deGrom won his second consecutive NL Cy Young Award after going 11-8 with a 2.43 ERA in 204 innings pitched. He led the National League with 255 strikeouts.

Preseason back stiffness has bothered deGrom in the past, bumping his initial start from opening day to the second game of the year in 2018. But it hasn't sidelined him for long.

“Right now it’s uncertain. I mean, I think he’s had some history. I think he missed one start a couple of years back because of back tightness. I don’t know if this is related," Rojas said. "We’ll reassess. We’ll talk to the performance staff and we’ll see what Jake’s status is.”

Rojas said he thought deGrom touched 100 mph with his fastball Tuesday night and the team didn't notice anything wrong until he mentioned the back trouble.

Last week, deGrom said he felt “really good” in summer camp. After spring training was paused in March, he stayed sharp by throwing consistently throughout the virus shutdown.

Even after the injury to Syndergaard was discovered in March, the Mets felt comfortable with five established starters in deGrom, Marcus Stroman, Rick Porcello, Steven Matz and Michael Wacha.

Depth beyond that is a major question mark. Rojas mentioned Corey Oswalt and Erasmo Ramírez as potential fill-ins who have gone at least three innings in summer camp.

“Injuries are going to play a big part in a short season like this,” Rojas said.

Rojas said versatile reliever Seth Lugo, a converted starter who has always preferred a rotation spot, would remain in the bullpen because of his critical role there.

The team is open-minded about using relievers as openers — but Rojas said that's not a simple transition.

“It’s a conversation that needs to be engaged for somebody to feel actually comfortable starting a game,” he explained.

NOTES: Right-handed relievers Brad Brach and Jared Hughes were placed on the injured list with no reason given. It's possible they tested positive for COVID-19, were exposed to the coronavirus or felt symptoms. Both pitchers have been absent throughout summer camp, which opened July 3. The Mets aren't commenting on players not in camp, declining to give explanations. ... Second baseman Robinson Canó was set to play three innings in Wednesday's intrasquad game after returning to camp Tuesday. The 37-year-old Canó had missed five straight workouts for undisclosed reasons.