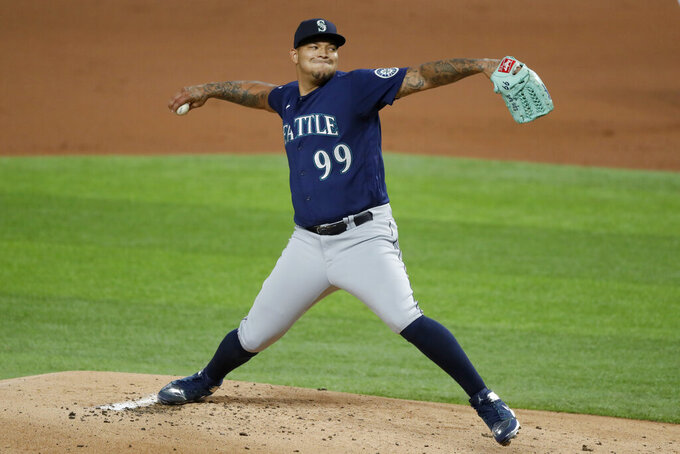 FILE - Seattle Mariners starting pitcher Taijuan Walker (99) throws to the Texas Rangers in the first inning of a baseball game in Arlington, Texas, in this Wednesday, Aug. 12, 2020, file photo. The Mets made a late addition to their starting rotation, agreeing to a $20 million, two-year contract with right-hander Taijuan Walker, a person familiar with the negotiations said. The person spoke to The Associated Press on condition of anonymity Friday, Feb. 19, 2021, because the agreement was subject to a successful physical.(AP Photo/Tony Gutierrez, File)

NEW YORK (AP) — The Mets made a late addition to their starting rotation, agreeing to a $20 million, two-year contract with right-hander Taijuan Walker.

Mets manager Luis Rojas cautioned the deal was not yet final but already was viewing the addition as a boost.

“A guy like him, it just makes your rotation so strong when you can add him,” Rojas said from spring training in Port St. Lucie, Florida.

New York's need for a pitcher increased with the loss of Seth Lugo, who will miss the start of the season following elbow surgery Tuesday to remove a bone spur.

New owner Steven Cohen was displayed a willingness to spend, retaining Marcus Stroman with an $18.9 million qualifying offer and acquiring Carlos Carrasco from Cleveland in a trade along with All-Star shortstop Francisco Lindor for a rotation also projected to include David Peterson.

The team hopes to get starter Noah Syndergaard back as soon as June. He is rehabbing from Tommy John surgery last March.

Walker has a five-pitch repertoire with a 93 mph fastball mixed among sliders, split-finger fastballs, sinkers and curveballs.

He was 4-3 with a 2.70 ERA over 11 starts during the pandemic-shortened season for Seattle and Toronto, which acquired him Aug. 27 for a player to be named, who became outfielder prospect Alberto Rodriguez.

“Looking at the history and his season last year, everything that he can bring to a team is pretty outstanding,” Rojas said. “You talk about talent plus experience. Around the league players that have been in the same clubhouse as him, we heard about some leadership.”

Rojas spoke with some players who had worked out with Walker in Arizona during the offseason.

New York was fourth in the NL East at 26-34 last year in the final season of ownership by the Wilpon and Katz families, who sold the Mets to Cohen on Nov. 6 for $2.4 billion.