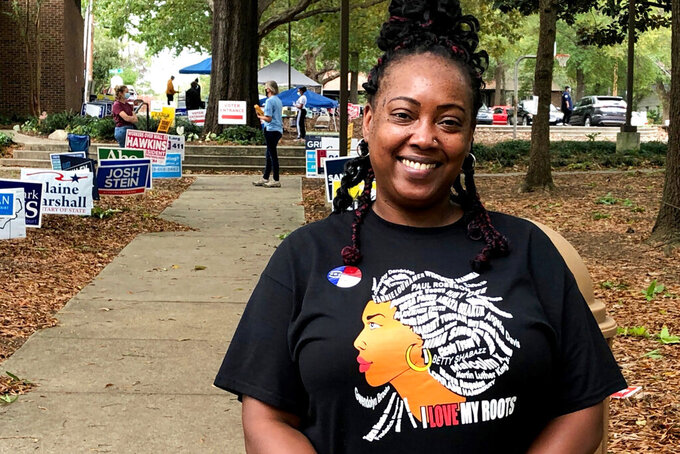 Tanya Bryant, 42, a case manager for an information technology company, voted on Thursday, Oct. 29, 2020 in Raleigh, North Carolina. The registered Democrat said the coronavirus pandemic is a big issue on her mind and contributed to her voting for Joe Biden. (AP Photo/Gary Robertson)

Voters in North Carolina made their pick for president while holding negative views about the country’s direction and the nation's economy, according to an expansive AP survey of the American electorate.

The race between President Donald Trump and Democratic rival Joe Biden concluded Tuesday as the nation remains in the throes of a global public health crisis and mired in the economic downturn it brought on. AP VoteCast found that 41% of North Carolina voters said the U.S. is on the right track, and 58% of voters said it is headed in the wrong direction.

Voters were more negative than positive in their assessments of the nation’s economy. Overall, 44% described economic conditions in the U.S. as excellent or good, and 56% called them not so good or poor.

Here’s a snapshot of who voted and what matters to them, based on preliminary results from AP VoteCast, a nationwide survey of about 132,000 voters and nonvoters -- including 3,731 voters and 701 nonvoters in North Carolina -- conducted for The Associated Press by NORC at the University of Chicago.

In the race for president, Biden had an edge over Trump among voters under 45, but Trump led Biden among older voters.

John Ruhl, 83, of Asheville said he voted for Trump because the president is a problem-solver who “had done as well as anybody would have done” in addressing the coronavirus pandemic.

Sidney McLaurin, a senior at Shaw University in Raleigh, said he voted for Biden in part because of the way Trump and his party handled economic assistance during the pandemic.

“I did not like how he handled the whole coronavirus situation,” McLaurin said. “There are a lot of struggling families out there, and we got only roughly around $1,200 for the stimulus package to last us seven months.”

Both voters in cities and suburban voters were more likely to prefer Biden. But Trump was preferred among voters in small towns and rural areas.

Biden was trying to become the first Democratic presidential candidate to win the state since Barack Obama in 2008. Trump beat Hillary Clinton in North Carolina by 3.6 percentage points in 2016.

Cunningham was preferred among both voters in cities and suburban voters, while voters in small towns and rural areas were more likely to back Tillis.

Both voters in cities and suburban voters were more likely to back Cooper, but Forest had an edge over Cooper among voters in small towns and rural areas.

The coronavirus pandemic was top of mind for many voters in North Carolina. Some 40% said it is the most important issue facing the country today.

Voters also considered the economy a major issue, with 28% saying it ranked at the top.

Tanya Bryant, who voted in Raleigh for Biden, said the government under Trump left people on their own during the economic downturn resulting from the pandemic.

“You’ve got people now who are trying to fight getting evicted because they didn’t want to lose their job, but they did, and now they can’t pay their bills,” Bryant said. “So we need to provide the kind of support to support those people.”

Backers of Trump in North Carolina said they favored him because of his business experience and pledges to keep taxes lower.

Paige Moore voted in Raleigh for Biden but expressed frustration with politicians of all stripes regarding the federal government’s failure to pass a second round of stimulus aid to boost the economy.

“I’m extremely disappointed in our elected officials on both sides and their inability to be able to negotiate the second CARES Act that was supposed to go out to everyone,” Moore said.

In North Carolina, 77% of nonvoters were younger than 45 and 82% did not have a college degree.

AP VoteCast is a survey of the American electorate conducted by NORC at the University of Chicago for Fox News, NPR, PBS NewsHour, Univision News, USA Today Network, The Wall Street Journal and The Associated Press. The survey of 3,684 voters in North Carolina was conducted for eight days, concluding as polls closed. Interviews were conducted in English and Spanish. The survey combines a random sample of registered voters drawn from the state voter file and self-identified registered voters selected from nonprobability online panels. The margin of sampling error for voters is estimated to be plus or minus 1.9 percentage points. Find more details about AP VoteCast’s methodology at https://ap.org/votecast.