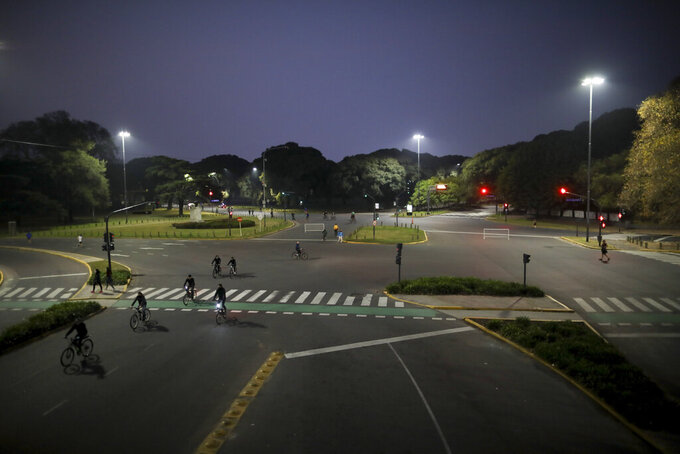 FILE - In this July 20, 2020 file photo, people exercise during a government-ordered lockdown to curb the spread of the new coronavirus in Buenos Aires, Argentina, after the city government authorized people to exercise outdoors as part of a roadmap for rolling back on Covid-19 curbing quarantine restrictions. Argentina’s government said Tuesday, Aug. 4, 2020, it has reached an agreement with its main creditors to restructure billions of dollars in foreign debt, offering some relief for a country hobbled by recession even before the pandemic hit. (AP Photo/Natacha Pisarenko, File)

BUENOS AIRES, Argentina (AP) — Argentina said Tuesday it has reached an agreement with its main creditors to restructure $65 billion in foreign debt, offering some relief for a country hobbled by recession long before the pandemic.

The agreement will allow creditor groups “to support Argentina’s debt restructuring proposal and grant Argentina significant debt relief,” the Economy Ministry said in a statement. It said some payment dates will change without raising the total amount of capital and interest to be paid “while enhancing the value of the proposal for the creditor community,” according to the statement.

The reported deal followed seven months of talks and shifting deadlines, and coincided with another extended period of economic misery in Argentina, where unemployment and inflation are stubbornly high, and the peso has been declining for years. The pandemic made things worse, as Argentina imposed a lockdown that helped to curb the spread of the new coronavirus but paralyzed vast sectors of the economy.

“We resolved an impossible debt during the worst economic crisis in memory and in the middle of a pandemic," President Alberto Fernández said.

Argentina has also been involved in talks with the International Monetary Fund about restructuring $44 billion in debt owed to the lender. The deal that Argentina announced on Tuesday was seen by analysts as a welcome step forward that could open the way for progress with the IMF, even if Argentina’s economic fortunes look fragile for the long term.

Kristalina Georgieva, managing director of the IMF, congratulated Argentine officials for reaching an agreement “in principle" on the nation's debt.

“A very significant step. Look forward to a successful conclusion in the interest of all," she said on Twitter.

“However, we doubt that the deal is enough to bring sustainability to Argentina’s public debt over the medium to long term,” the London-based consultancy said.

Fernández won election last year, capitalizing on discontent with former leader Mauricio Macri's handling of the economy. Macri had been determined to impose fiscal discipline and jumpstart the wayward economy, but conditions deteriorated further and he ended up going to the IMF for a record financing deal.

Opponents had associated Fernández with the past leftist populism of his vice president and former president, Cristina Fernández de Kirchner (the two are not related), though his term so far has been dominated by efforts to avoid a default and reach an accommodation with creditors.

The deal with the creditor groups that was announced on Tuesday alters payment dates on the new bonds to Jan. 9 and July 9, 2021, instead of March 4 and Sept. 4 of the same year as previously proposed, according to the Economy Ministry. Those bonds “will begin amortizing in January 2025 and mature in July 2029,” its statement said.

Argentina will also change some legal clauses in the new bond documentation to address creditor proposals “that seek to strengthen the effectiveness of the contractual framework as a basis for the resolution of sovereign debt restructurings," the ministry said.

Creditors have until Aug. 24 to formally accept the deal, the ministry said, extending the deadline from its previous expiration date on Tuesday.

A Citi analysis noted that creditor groups hadn't yet issued a statement supporting Argentina's amended terms, but said the latest economic terms of both sides had seemed close. It noted that Argentine bonds had soared on news of the agreement.

“With the removal of this uncertainty and potential engagement with the IMF, we think further upside is likely in the coming weeks," Citi said. It added that local assets are likely to “temporarily benefit” from the announcement.