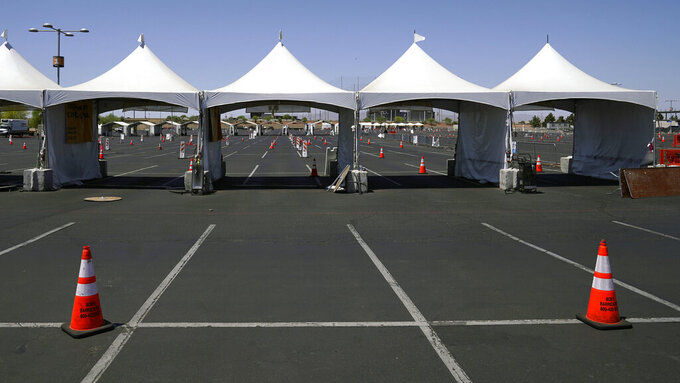 PHOENIX (AP) — Arizona on Friday provided the last COVID-19 vaccination injections at the state’s first and largest COVID-19 mass-vaccination site, which is closing as the state transitions outdoor operations to indoor venues amid warming weather.

The drive-thru site outside State Farm Stadium was replaced by a facility inside Gila River Arena in the Phoenix suburb of Glendale. There are three additional large state-run sites in metro Phoenix plus big sites in Flagstaff, Tucson and Yuma. Most are indoors.

The site switch happened as Arizona has experienced a recent slow rise in new confirmed COVID-19 cases and deaths as public health officials step up outreach efforts to promote vaccinations.

The seven-day rolling average of daily new cases rose over the past two weeks from 673 on April 7 to 675 on Wednesday while the rolling average of new deaths rose from 13 to 17 during the same period, according to Johns Hopkins University data.

The state's coronavirus dashboard reported 594 COVID-19 patients occupied hospital beds as of Thursday. That metric has ranged between 500 and 600 for the past three weeks — about a tenth of the peak daily hospitalizations in January.

Nearly 2.1 million people, 29% of the state’s population, have been fully vaccinated against COVID-19, according to the dashboard.

The vaccination site at State Farm Stadium, home of the NFL's Arizona Cardinals, opened Jan. 11, providing more than 10,000 doses a day by early April and a total of approximately 820,000, or 17% of the statewide total through Thursday.

In recent weeks, the site only operated during nighttime hours as Arizona shifted its vaccination program indoors as temperatures began to climb.

Demand for vaccinations has fallen off in Arizona, with state officials recently touting the availability of same-day appointments. That's in contrast to previous months when many people scrambled online to snag appointments for shots.

The vaccines are increasingly available in retail pharmacies and local health clinics and are being administered at pop-up sites, Christ noted.

“However we do know we are still doing tens of thousands of shots a day in a week at these mass-vaccination sites, so we know that they are still good points of access for vaccine as well," she said.

The replacement site inside Gila River Arena, home of the NHL's Arizona Coyotes, will use the main concourse to check in and vaccinate patients, who will then sit in the arena’s seats for post-injection observation.

The mass drive-thru vaccination site at the University of Arizona in Tucson will close May 2 and re-launch the next day at the campus' Gittings Building.

__ Pima County isn't backing down from enforcing mask-wearing at schools despite Gov. Doug Ducey's executive order rescinding such a mandate. Dr. Francisco Garcia, the county's chief medical officer, said the mask requirement for schools will be in effect for at least the next 90 days before the state Legislature adjourns.

“Because we have this short time to get people vaccinated, we’re going to double down and do everything we can — cajole, incentivize,” Garcia said. ___ Associated Press writer Terry Tang contributed to this report.