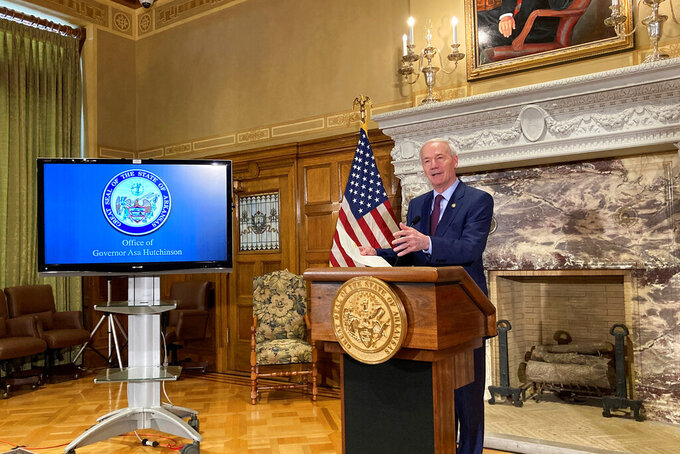 Arkansas Gov. Asa Hutchinson speaks to reporters at the state Capitol in Little Rock, Ark., on Tuesday, May 11, 2021. The governor formed a steering committee to come up with plans for spending the state's share of the latest federal coronavirus relief package. (AP Photo/Andrew Demillo)

LITTLE ROCK, Ark. (AP) — Arkansas Gov. Asa Hutchinson on Tuesday formed a panel to come up with ways to spend the $1.5 billion the state is receiving from the latest federal coronavirus relief package.

The Republican governor formed a 15-member steering committee for the state's share of the $1.9 trillion relief measure that became law in March. Hutchinson formed a similar committee for the coronavirus relief money that was approved last year.

The panel will be made up of eight cabinet members and three members each from the state House and Senate.

“We have to be methodical about this and not rushed," Hutchinson told reporters.

The U.S. Treasury Department on Monday issued broad guidance on how the relief funds can be spent. Hutchinson said he believed the priority for the state's share of the relief spending should be capital investments, citing broadband and cybersecurity as two areas he'd like funded with the additional money.

“It needs to be investments we can make that do not incur long-term spending and indebtedness of the state," Hutchinson said.

Because Arkansas’ unemployment rate is not significantly higher than its pre-pandemic level, the state is eligible to receive just half of its $1.5 billion allotment immediately, with the rest being provided one year later.

Hutchinson said he hoped to visit with the Biden administration about its guidance that the funds can't be used to pay for tax cuts. The governor has said he plans to call a special session of the Legislature in the fall to take up income tax proposals, but said that the reductions would not be paid for by the relief money.

The governor also said the Pfizer vaccine will be available for 12- to 15-year-olds in the state once a federal advisory committee issues recommendations for using the two-dose vaccine. The move will open the vaccine up to another 160,000 people in the state.

The vaccine will be available in every county, and the state is talking with several districts about holding on-site clinics, said Col. Robert Ator, who is coordinating the state's vaccination program.

Nearly 37% of the state's population has received at least one virus vaccine dose, according to the Centers for Disease Control and Prevention. Hutchinson has said he wants half the state at least partially vaccinated in three months.

Arkansas' virus cases on Tuesday rose by 233 to 337,819, the Department of Health said. The state's COVID-19 deaths increased by six to 5,770 and hospitalizations remained unchanged at 169.