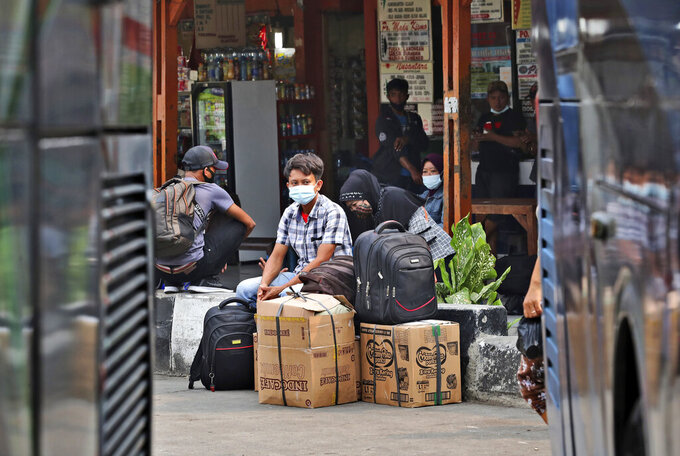 People wait for a bus to take them to their home villages at the Kalideres bus terminal in Jakarta, Indonesia, Wednesday, May 5, 2021. The mass exodus out of major cities in the world's most populous Muslim country is underway despite travel restrictions imposed by the government to prevent the spread of coronavirus outbreak, as people are heading home to their villages to celebrate Eid al-Fitr holiday that marks the end of the holy fasting month of Ramadan on May 13. (AP Photo/Tatan Syuflana)

WELLINGTON, New Zealand (AP) — The military and police in the Pacific nation of Fiji have surrounded and locked down a major hospital amid concerns of a growing virus outbreak.

Health authorities say they’re quarantining 400 patients, doctors, nurses and staff within the compound until they can determine who had contact with a coronavirus patient who died.

The 53-year-old patient at Lautoka Hospital was just the third person in Fiji to die from the virus but the nation’s leaders are deeply worried that the latest outbreak is spreading, especially after two doctors at the hospital tested positive for the virus.

Authorities say that throughout the country, there are currently 28 cases of community transmission. They have restricted movement in six so-called containment areas, including the capital, Suva.

Fiji's health system is ill-equipped to deal with a major outbreak.

Dr. James Fong, the permanent secretary for health, said the hospital is closed and all medical services are being diverted to other facilities. He said those sequestered in the hospital would be provided with food, bedding and whatever other supplies they needed.

“Right now, we are in a war with this virus and the frontline has just extended to Lautoka Hospital,” Dr. Fong said. “This will be the greatest test our health care system has ever faced –– it will be a test for all of us. Lives are at stake, sacrifices must be made, and every Fijian’s commitment is needed. The virus is insidious, it is unrelenting.”

Fiji is located north of New Zealand and is home to just under 1 million people.

— Indonesia is prohibiting travel during the popular homecoming period to celebrate Eid al-Fitr. COVID-19 cases have been decreasing in the world's most populous Muslim country, but the government imposed the ban after seeing a significant rise in the mortality rate last year after the Eid holiday marking the end of Ramadan. The ban started Thursday and will last for 12 days, exempting only civil servants, police and military officers, and those who need to travel for work.

— Philippine President Rodrigo Duterte has asked China to take back 1,000 doses of donated Sinopharm vaccine after he was criticized for getting the injection even though the vaccine hasn't been authorized for public use in the country. The Philippine health secretary injected Duterte on Monday, and an unspecified number of Duterte’s guards received the Sinopharm vaccine in secrecy. Duterte said he told the Chinese ambassador “that this came under criticism because Sinopharm did not undergo examination so let’s just do away with it. You withdraw all Sinopharm vaccines, 1,000 of them.” Duterte said his injection did not breach any regulation because it fell under a “compassionate use" exemption. Critics, however, said Duterte and Health Secretary Francisco Duque III made a mockery of vaccine regulations while ordinary Filipinos have struggled with a plethora of pandemic restrictions.

— New Zealand has halted quarantine-free travel with the Australian state of New South Wales for at least two days while two coronavirus cases discovered in Sydney are investigated. COVID-19 Response Minister Chris Hipkins said genome sequencing has linked a case found Wednesday to a person who recently returned to Australia from the United States, but its not yet known how the infection was passed along or if there are more people involved in the chain of transmission. Hipkins said the travel pause would be under constant review. New Zealand and Australia opened a quarantine-free travel bubble last month amid much fanfare.

— Infections in India hit another grim daily record on Thursday as demand for medical oxygen jumped seven-fold and the government denied reports that it was slow in distributing lifesaving supplies from abroad. The number of new cases breached 400,000 for the second time and pushed India’s total past 21 million. The nation's health minister said India has enough oxygen but faces constraints in moving it. Most of its liquid oxygen supply is produced in eastern India while the demand has risen in northern and western parts.

— Sri Lanka has banned entry of passengers traveling from neighboring India as both nations see virus cases surge. Sri Lanka was adding fewer than 200 cases a day, but in the past two weeks, the number of new cases detected has risen eight-fold. On Thursday, health authorities said 1,939 cases were detected during the last 24 hours. The highest number of patients are reported from the Colombo district, which includes the capital.

— Thousands of passengers have rushed to leave Nepal ahead of a halt to all international flights because of spiking COVID-19 cases. Nepali citizens leaving to report back for jobs in foreign countries or visit family members and a few foreign tourists lined up at Kathmandu’s Tribhuvan International Airport before flights cease at midnight Thursday. Domestic flights in Nepal have been halted since Monday. Nepal’s main cities and towns have been in lockdown since last month as the number of coronavirus cases and deaths continues to rise. Nepal recorded its highest daily infections with 8,659 on Wednesday and 58 deaths, which is also the highest. It has reported a total of 359,610 cases, including 3,475 deaths.

— Cambodia has eased a major restriction it had imposed to battle the coronavirus, allowing travel in and out of the capital, Phnom Penh, and the satellite town of Takhmao. The travel ban was in effect for three weeks. Phnom Penh’s residents remain under a set of restrictions that vary according to whether an area is considered at high, medium or low risk of spreading the infection. All residents must observe an 8 p.m. to 3 a.m. curfew. The Health Ministry announced 650 new COVID-19 cases on Thursday, bringing the total to 17,621, while the death toll rose by four to 114.