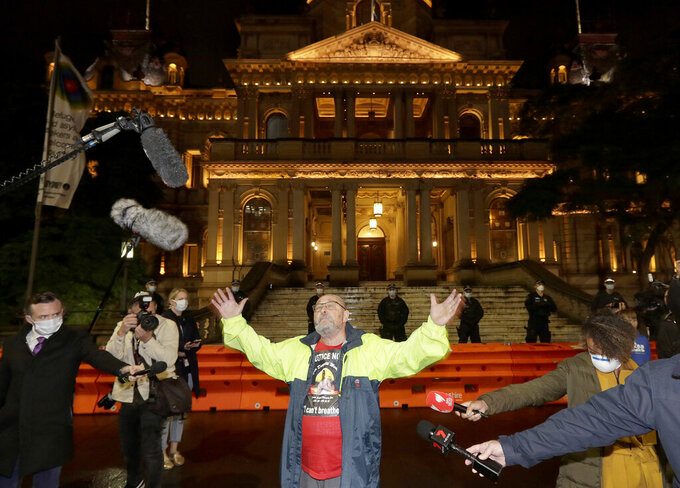 A lone protester makes a statement at Town Hall in Sydney, Friday, June 12, 2020, to support U.S. protests over the death of George Floyd. Hundreds of police disrupted plans for a Black Lives Matter rally but protest organizers have vowed that other rallies will continue around Australia over the weekend despite warnings of the pandemic risk. (AP Photo/Rick Rycroft)

NEW DELHI (AP) — India’s coronavirus caseload has become the fourth-largest in the world, overtaking Britain, by adding 10,956 new cases in yet another biggest single-day spike.

India's two-month lockdown kept transmissions low but in a large population of 1.3 billion, people remain susceptible and the campaign against the virus is likely to go on for months, said Balram Bhargava, director-general of the Indian Council of Medical Research.

India's lockdown was imposed nationwide in late March but has eased since, and it is now largely being enforced in high-risk areas. The spiking caseload came after India allowed the reopening of shops, shopping malls, factories and religious places.

The increase reported Friday raised India's total cases to 297,535, including 8,498 deaths, according to the Health Ministry. The death toll increased 396 in the past 24 hours.

India's number of confirmed cases is behind only the United States, Brazil and Russia.

Mumbai, New Delhi and Chennai are the worst-hit cities in the country, and Bhargava said urban residents have a greater chance of contracting the virus. Infections in rural areas have surged, however, after migrant workers who left cities and towns after they lost jobs returned to their hometowns.

— MORE JAPAN ECONOMIC MEASURES: Japan’s parliament approved more money to soften the economic blow from the pandemic. The 32 trillion yen ($300 billion) second supplementary budget includes support for small businesses, including programs to finance their rents and adjust employment. It also has funding for dealing with future waves of infections and developing vaccines and treatments for COVID-19. Japan’s economy, the world’s third largest, slipped into recession in the last quarter. Business activity has slowly resumed after a state of emergency was lifted in late May. The country has confirmed 17,332 cases and 922 deaths as of Thursday.

— SCHOOL OPENING SUSPENDED IN BEIJING: China’s capital is suspending plans to restart classes for the first three years of elementary school next week amid reports of new cases of local transmission in the city. Beijing’s municipal government said it wants to ensure the health and safety of students and teachers. Local authorities announced on Thursday a 52-year-old man had become the city’s first confirmed case of local transmission in weeks after he arrived at a clinic complaining of fever. The official Xinhua News Agency said two other cases of COVID-19 were confirmed in Beijing on Friday. The man whose diagnosis was announced Thursday had reportedly visited a market on June 3. The hall where he shopped has now been closed for disinfection, state media reported. It wasn’t clear if there was a connection between the three new cases.

— THAILAND LOOSENS RESTRICTIONS: Thailand has announced a further easing of restrictions that were imposed to fight the spread of the coronavirus, including allowing some schools to reopen and scrapping a curfew. The new measures, which take effect Monday, follow more than six weeks in which the daily increase in COVID-19 cases was usually less than 10, and almost all new infections originated abroad. Restaurants will no longer be banned from serving alcohol, though bars remain shut. International flights remain suspended until the end of the month while the government considers how to gradually reopen the tourism sector, a major pillar of the economy.

— RESURGENCE IN SEOUL: South Korea’s top infectious disease expert has raised alarm over the speed of coronavirus transmissions in the densely populated capital area, where around 30 to 50 new infections have been reported each day since late May. Jung Eun-kyeong, director of the Korea Centers for Disease Control and Prevention, said the average infectiousness of virus carriers in the Seoul metropolitan area was about three times higher than in the rest of the country. She said a measure of the number of infections caused by a sick individual in the capital area reached as high as 1.7 or 1.8 in recent weeks. Any number above 1 indicates a growing epidemic. She pleaded with Seoul residents to stay home over the weekend, saying there is “high concern” that increased public activity will lead to a massive circulation of the virus. Health workers have struggled to trace hundreds of infections linked to e-commerce workers, church gatherings, elderly door-to-door sellers and clubgoers.

— FOREIGN STUDENTS IN AUSTRALIA: Prime Minister Scott Morrison said international students will be allowed to begin returning to Australia in July as states reopen their borders. Morrison said he expected all state borders to reopen in July, with the possible exception of Western Australia. He said states could only welcome back international students if they opened their borders to interstate travel as well. International students have been Australia’s most lucrative industry after mining, with China the largest source of foreign students. China this week warned its citizens of the risk of pandemic-related racism in Australia, which Foreign Minister Marise Payne called “disinformation.”

—- CHINA GIVES PHILIPPINES VACCINE ASSURANCE: President Rodrigo Duterte has been promised by his Chinese counterpart that the Philippines “as a friendly neighbor” will be prioritized when China is able to develop a vaccine against the coronavirus. Presidential spokesman Harry Roque said Friday that Duterte got the assurance from Chinese leader Xi Jinping in a late Thursday telephone call. Roque said Xi assured Duterte of “his country’s commitment to make the vaccine available for all, adding that the Philippines, as a friendly neighbor, would certainly be a priority.”

— MALDIVES LOOSENS RESTRICTIONS: Maldives will relax more coronavirus restrictions on Monday to allow people to leave their homes during daytime. People will be able to go out without permits from 5 a.m to 10 p.m. Parks and public spaces will also be reopened, and workouts will be allowed for three hours every evening. Shops will reopen and restaurants will be able to sell food for delivery or takeaway. Previously, each family received three passes, each permitting one person two hours outside each week. The government plans to reopen schools, government offices, mosques, international travel, gyms and dine-in restaurants next month. Maldives has reported 1,976 COVID-19 cases, including eight deaths.