Asia Today: Indonesians return to mosques, at a distance 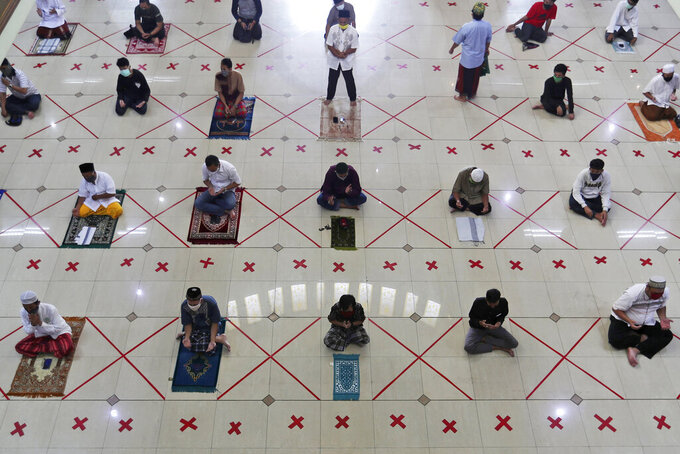 Muslims pray spaced apart to help curb the spread of the coronavirus during a Friday prayer at the Al Barkah Grand Mosque in Bekasi on the outskirts of Jakarta, Indonesia, Friday, May 29, 2020. Muslims in some parts of Indonesia attended Friday prayers as mosques closed by the coronavirus for weeks were allowed to start reopening in the world's most populous Muslim nation. (AP Photo/Achmad Ibrahim)

JAKARTA, Indonesia (AP) — Muslims in some parts of Indonesia attended Friday prayers as mosques closed by the coronavirus for weeks were allowed to start reopening in the world’s most populous Muslim nation.

The guidelines for worship facilities released by religious affairs minister Fachrul Razi on Friday change many traditions in mosques. Worshippers usually pray shoulder to shoulder, and they huddle, hug and shake hands once the prayer ends, with cheek-to-cheek kisses common.

Muslims in the Jakarta satellite city of Bekasi were expected to stay at least one meter (yard) apart with no handshaking, and heard shorter sermons. No children were allowed to join the prayers, and police and soldiers ensured health protocols such as social distancing and mask wearing were observed.

Similar scenes were seen in another satellite city of Bogor, and in Makassar, a big city on Sulawesi island.

The government is gradually deploying 340,000 security personnel to enforce health rules as the country prepares to reopen its economy.

Indonesia has recorded more than 25,200 coronavirus cases and more than 1,500 deaths, the highest number of fatalities in Southeast Asia.

— MANILA LOCKDOWN EASING: Philippine President Rodrigo Duterte is relaxing a lockdown in the capital as the economy weakens and the government helps feed millions restricted to their homes. Metropolitan Manila will move to a more relaxed quarantine on Monday after more than two months of police- and military-enforced lockdown. More work and business operations, along with public transport, will be allowed to resume, but physical distancing and other safeguards will be required. Duterte made the announcement hours after the Department of Health reported a single-day spike of 539 infections, more than 60% of them in the congested capital. That brought the total number of infections to 15,588, including 921 deaths.

— ANOTHER RECORD JUMP IN INDIA: India registered another record daily increase with 7,466 new coronavirus cases. The Health Ministry's new figures on Friday show India now has 165,799 confirmed cases with 4,706 deaths, which both now exceed China. India's two-month lockdown is set to end on Sunday. Prime Minister Narendra Modi’s government is expected to issue new guidelines this weekend, possibly extending the lockdown in worst-hit areas as it promotes economic activity. Most cases are concentrated in states with densely populated cities, but cases have been increasing in some of India's poorest eastern states after migrant workers who lost jobs in the cities returned to their native villages.

— THAI RULES EASING: Thai authorities are further relaxing restrictions imposed two months ago to contain the coronavirus. Cinemas, theaters, zoos and aquariums can reopen Monday but must limit the number of admissions. Cinemas can sit a maximum of 200 people at a time, seated at a safe distance from each other with the exceptions of couples. Other establishments allowed to reopen include massage parlors, gyms, bowling alleys and sports venues. Thailand has had only single-digit increases in cases for most of May. On Friday it announced 11 new cases, bringing the total to 3,076 including 57 deaths.

— ONE ACTIVE CASE: New Zealand is down to just one person in the entire nation of 5 million people who is known to be infected with the coronavirus after no new cases have been detected for the past week. In total, 1,504 people were found to have contracted the virus. Of those, 1,481 have recovered and 22 died. About 275,000 people have been tested. The country has set a goal to eliminate the virus altogether, an ambition aided by a strict lockdown in late March that has been gradually eased in recent weeks.

— NO NEW CASES IN CHINA: China on Friday again reported no new cases of the coronavirus and no new deaths. Just 70 people remain in hospitals and another 414 are being isolated and monitored for possibly having the disease or for having tested positive without showing any symptoms. China has reported a total of 4,634 deaths from the disease among 82,995 cases.

— THANKS TO MEDICAL WORKERS: A Japanese Air Self-Defense Force’s aerobatics team performed a demonstration flight to express gratitude to medical workers. The six Blue Impulse aircraft flew for about 20 minutes over Tokyo to thank medical personnel, who have faced discrimination from those who fear being infected. Japan ended a seven-week state of emergency on Monday. It had 16,719 cases and 874 deaths as of Thursday, according to the health ministry. The governor of Tokyo, Yuriko Koike, said Friday the city is ready to move to step 2 of a three-phase road map to gradually reopen businesses. As of June, theaters, cinemas, gyms and retailers will be allowed to open.

— MALDIVES EASES LOCKDOWN: The Maldives has increased the number of hours that people can spend outside their homes and allowed some businesses to reopen in its first relaxation of coronavirus restrictions imposed in mid-April. Each family will be issued three passes, each of which allows a two-hour outing twice a week. Previously, only one family member was allowed to go out for one hour every week. Most shops will now be allowed to reopen and taxis and trucks can operate. The government said it made the decision because the spread of the virus is now manageable. The tiny archipelago nation of 400,000 people has reported 1,513 cases with five deaths. Authorities say government offices will begin operating if the relaxation works well for two weeks.