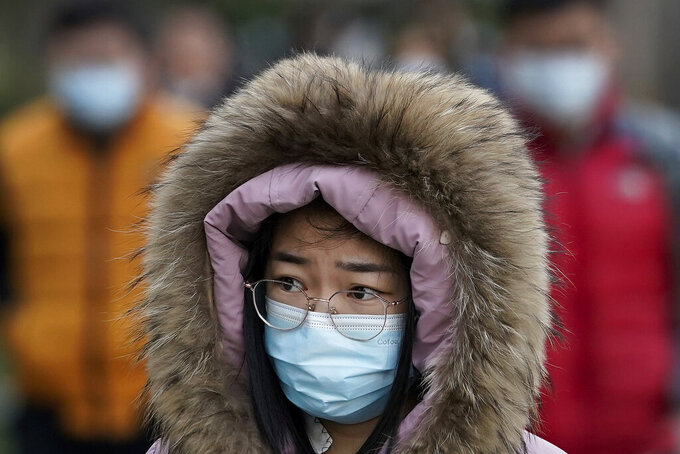 A woman wearing a face mask to help curb the spread of the coronavirus walks on a street during the morning rush hour in Beijing, Tuesday, Dec. 15, 2020. (AP Photo/Andy Wong)

COLOMBO, Sri Lanka (AP) — The Maldives president’s office says it is discussing how to provide a “humane response” to a request from neighboring Sri Lanka to allow burials for Muslims who die of COVID-19.

Presidential spokesman Ibrahim Hood said Tuesday that President Ibrahim Mohamed Solih has received a request from Sri Lanka to look into the possibility of allowing such burials.

“The request has been received. At present we are considering and discussions are ongoing with regard to what would be the appropriate and humane response,” Hood told The Associated Press.

There was no immediate confirmation from Sri Lanka of such a request.

Sri Lanka’s government in March announced it will cremate the bodies of all people who die of COVID-19, saying the coronavirus could contaminate underground water.

— Authorities in Sri Lanka said on Tuesday that more than 3,000 COVID-19 cases have been detected in the country’s highly congested prisons, as infections also surge in the capital and its suburbs. They said that 2,984 inmates and 103 guards have been confirmed to have the disease in seven prisons around the country. Sri Lankan prisons are highly congested, with more than 26,000 inmates crowded in facilities with a capacity of 10,000. Eleven inmates were killed in pandemic-related riots inside a prison early this month. Unrest has been growing, with prisoners demanding better facilities and care as COVID-19 cases increase. Inmates have staged several protests inside prisons in recent weeks.

— Taiwan has set a goal to vaccinate 60% of its population with a COVID-19 vaccine, or 15 million people, a health official said Tuesday. Taiwan has signed an agreement with COVAX to purchase a COVID-19 vaccine, but is also actively in talks with vaccine companies who have candidates in phase 3 trials for a potential bilateral agreement as well, said Jing-Hui Yang, a deputy director at the Central Epidemic Command Center. COVAX, a global plan to distribute vaccines equally, has not yet started sending out shipments of vaccines. The island will prioritize frontline health workers and essential personnel to receive the vaccine first, Yang said. Later on, the immunization campaign will target the elderly as well as those who have existing chronic illnesses. Officials expect the vaccines to arrive early next year. Still, an immunization campaign will take time, and will not be finished in just a month or two, Yang warned.

— South Korea has reported another 880 new cases of the coronavirus as it slips deeper into its worst wave of the pandemic yet. That brought the country’s confirmed cases to 44,364 on Tuesday, and was the 38th consecutive day of triple-digit daily increases. More than 10,000 infections have been reported in the last 15 days alone, mostly from the densely populated Seoul metropolitan area where health workers are struggling to stem transmissions tied to hospitals, long-term care facilities, restaurants, churches and schools. The death toll was at 600 after 13 COVID-19 patients died in the past 24 hours. The Korea Disease Control and Prevention Agency said 205 among 11,205 active patients were in serious or critical condition as fears grow over possible shortages of intensive-care units. Critics say the country’s viral resurgence underscores the risk of encouraging economic activity when vaccines are at least months away. The government had lowered social distancing restrictions to the lowest tier in October out of concerns about sluggish economic growth rates despite warnings of a viral surge during the winter, when people spend longer hours indoors. The government restored some restrictions over the past weeks.