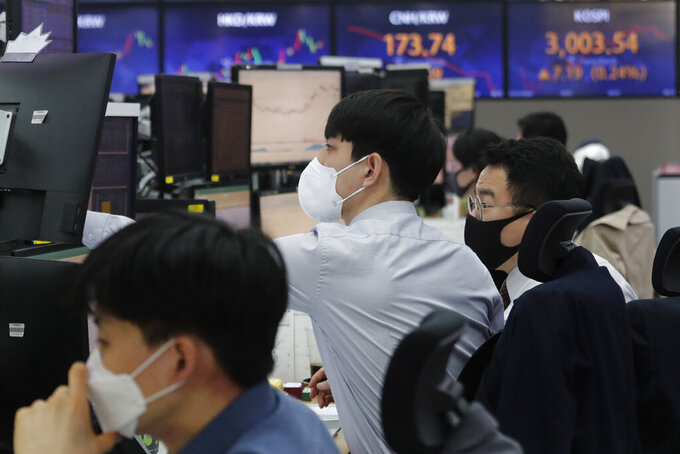 BANGKOK (AP) — Shares advanced in Asia on Thursday after a broad decline on Wall Street led by selling of tech heavyweights like Facebook and Apple.

“Asian markets are likely to move sideways on Thursday with sentiment subdued in reaction to the weakness of the technology sector overnight," ING economists Prakash Sakpal and Nicholas Mapa said in a commentary.

Oil prices fell back after surging 6% on Wednesday on concerns over disruptions to shipping from a skyscraper-sized cargo ship wedged across Egypt’s Suez Canal.

Efforts continue to free the Ever Given, a Panama-flagged ship that carries cargo between Asia and Europe that ran aground Tuesday in the narrow, man-made canal dividing continental Africa from the Sinai Peninsula.

Stock investors are keeping an eye on Washington, where Federal Reserve Chair Jerome Powell and Treasury Secretary Janet Yellen told the Senate about efforts to combat the economic impact of the coronavirus pandemic. The Biden administration is considering up to $3 trillion in additional spending on infrastructure, green energy, and education.

Yellen believes the U.S. government has more room to borrow, but said higher taxes would likely be required in the long run to finance future spending increases. That spooked some investors.

Meanwhile, Powell reiterated that a recent jump in the yield on the 10-year U.S. Treasury, which soared from less than 1% at the beginning of the year to 1.63% Thursday, was mostly a sign of confidence among investors that the economy is improving.

Bond yields have risen this year as traders have been watching the potential for inflation pressures to pick up after struggling economies were flooded with credit and government spending. That has depressed U.S. bond prices, prompting some to shift money out of stocks.

While rising interest rates are a key concern, the pandemic remains a dominant topic for investors. Stocks fell on Tuesday after Germany, Europe’s biggest economy, and the Netherlands imposed new travel and business curbs in response to spikes in infection. That followed similar moves earlier by Italy and France.

Bank stocks, which took a beating on Tuesday, were among the best performers. Banks have been volatile the last couple of weeks as investors try to gauge the impact of higher interest rates on the U.S. economy. Higher interest rates can slow economic momentum, but they also allow banks to charge more for loans. JPMorgan Chase added 0.8%.

GameStop sank 33.8% after reporting results that missed Wall Street’s forecasts, though the stock is still up more than six-fold since the beginning of the year after it became a social media darling for a swarm of online investors.

Benchmark U.S. crude oil lost $1.02 to $60.16 per barrel in electronic trading on the New York Mercantile Exchange. Brent crude, the international standard for pricing oil, lost 90 cents to $63.35 per barrel.