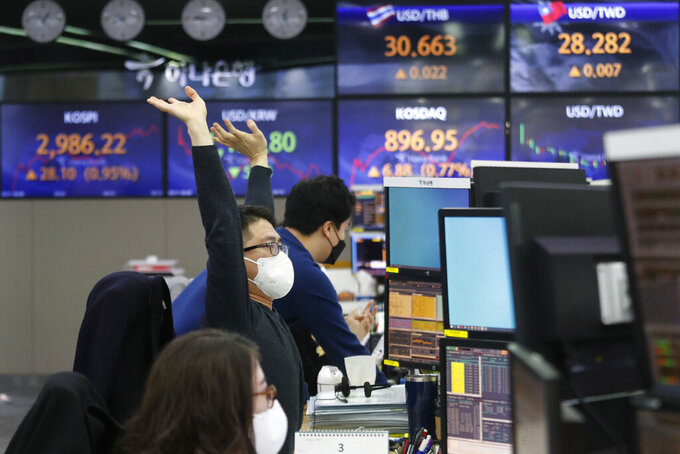 A currency trader stretches at the foreign exchange dealing room of the KEB Hana Bank headquarters in Seoul, South Korea, Thursday, March 11, 2021. Stocks climbed in Asia on Thursday after a key measure of inflation in the U.S. came in lower than expected, easing worries that price pressures could push interest rates higher. (AP Photo/Ahn Young-joon)

Stocks climbed in Asia on Thursday after a key measure of inflation in the U.S. came in lower than expected, easing worries that price pressures could push interest rates higher.

Shares rose in Tokyo, Shanghai and Hong Kong but edged lower in Sydney.

The Labor Department reported that U.S. consumer prices, a key measure of inflation at the consumer level, rose 0.4% in February, the biggest gain in six months, led by a jump in gasoline prices. But core inflation, excluding food and energy, posted a much smaller 0.1% gain, easing fears that the inflation might surge as the economy recovers from the pandemic.

The timing could not have been better, Stephen Innes of Axi said in a commentary.

“As Biden’s . . . $1.9 trillion fiscal stimulus plan was passed by the House, CPI data revealing softer sequential core pressures were there to greet and subdue fears of runaway inflation," Innes said. “Upshot being, U.S. inflation data appears to have bought some space for, and lent credence to, prolonged and unwavering stimulus."

Treasury yields fell broadly following the report, including the benchmark 10-year Treasury note, which influences interest rates on mortgages and other consumer loans. The yield on the 10-year Treasury note was steady at 1.53% on Thursday after rising as high as 1.60% late last week.

Bond yields have risen in the past month. The fall in bond prices, which are inversely related to yields, attracted investors reluctant to pay high prices for stocks, especially tech stocks that looked most expensive.

The Shanghai Composite index jumped 1.8% to 3,417.63 as Chinese leaders prepared to wrap up the annual session of the largely ceremonial legislature.

Investors are also betting the latest $1.9 trillion in government stimulus will help lift the U.S. economy out of its coronavirus-induced malaise. The House approved the sweeping pandemic relief package over Republican opposition on Wednesday, sending it to President Joe Biden to be signed into law. The package would provide $1,400 checks for most Americans and direct billions of dollars to schools, state and local governments, and businesses.

Banks were among the biggest gainers. JPMorgan rose 2.2%, Bank of America gained 2.9% and Citigroup climbed 3.9%. More than 75% of companies in the S&P 500 notched gains.

In other trading, U.S. benchmark crude oil gained 53 cents to $64.97 per barrel in electronic trading on the New York Mercantile Exchange. It picked up 43 cents to $64.44 per barrel on Wednesday. Brent crude, the international standard, gained 56 cents to $68.46 per barrel.