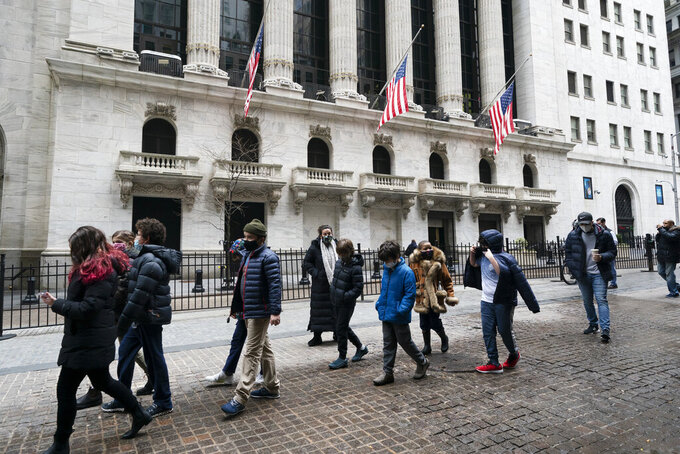 A school group walks by the New York Stock Exchange, Tuesday, Feb. 23, 2021. Major indexes are off to a mixed start on Wall Street as gains for banks and industrial companies are offset by losses in Big Tech stocks like Apple and Amazon. The S&P 500 was down 0.2% in the first few minutes of trading Wednesday, a day after it narrowly managed to break a five-day losing streak. (AP Photo/Mark Lennihan)

BEIJING (AP) — Asian stock markets followed Wall Street higher Thursday after the Federal Reserve chairman said the U.S. central bank is in no hurry to withdraw support for the economy.

Overnight, Wall Street hit a new high after chairman Jerome Powell said the Fed sees no sign inflation might rise out of control. That helped to dampen fears sparked by a rise in U.S. Treasury bond yields, an indicator of inflation sentiment, that rising price pressure might lead the Fed to raise interest rates.

"Powell has again been pouring oil on troubled markets and making some very sensible distinctions between price level rises and inflation," said Robert Carnell of ING in a report. “But the Fed still has communication issues over its future policies which could emerge as a tantrum some way down the line.”

The Hang Seng in Hong Kong advanced 2% to 30,301.64 after the territory's government promised more coronavirus aid and forecast economic growth of at least 3.5% this year.

The Kospi in Seoul added 3.3% to 3,056.22 after the Bank of Korea left interest rates unchanged and forecast 3% annual economic growth.

Global stock prices have soared over the past six months on hopes for a coronavirus vaccine and central bank promises of abundant credit to support struggling economies. Those sentiments have faltered due to warnings the rally might be too early and that inflation might rise, prompting central banks to pull back.

On Wednesday, Powell affirmed the Fed's policy commitment in a second day of testimony to legislators in Washington.

The central bank earlier indicated it would let the economy “run hot” to make sure a recovery is well-established following the deepest slump since the 1930s. Powell said it might take more than three years to hit the Fed's target of 2% inflation.

On Thursday, the yield on the 10-year U.S. Treasury note, or the difference between the market price and what a buyer would be paid when the bond matures, widened to 1.40%, the highest in just over a year. That indicated investors were moving money out of bonds, a sign they expect inflation to rise, which would reduce the value of the payout.

Powell told the House Financial Services Committee the Fed was in no hurry to raise interest rates or trim its $120 billion in monthly bond purchases, which pushes down interest rates by making more money available for lending.

In Asia, governments aside from China "should more or less follow the Fed in a patient ‘wait-and-see’ mode in the near future,” Alex Wolf of JP Morgan Private Bank said in a report this week. “This could be a further tailwind to growth this year.”

Investors also are looking for Congress to approve President Joe Biden's proposed economic aid plan. That includes $1,400 checks to most Americans. However, the plan faces staunch opposition from Republicans and is still subject to negotiations.