Asterisk on the NBA title? Coaches, players say not a chance 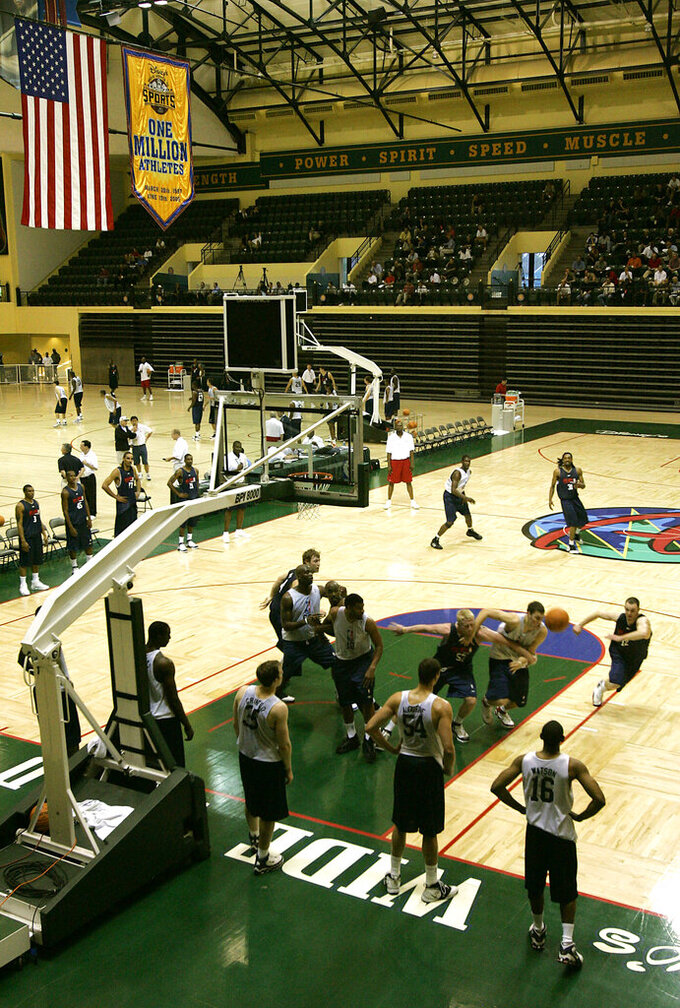 FILE - In this June 6, 2006, file photo, college players scrimmage during an NBA pre-draft basketball camp at the Disney Wide World of Sports complex in Kissimmee, Fla. Most of the 22 remaining NBA teams were taking the court for the first mandatory workouts in nearly four months Wednesday, July 1, 2020, as the league continued prepping for the restart of the season at the Disney campus near Orlando, Florida. Workouts are still individual in nature, but are no longer voluntary. (AP Photo/John Raoux, File)

The 2020 NBA champion, if one is crowned, will have emerged as the ultimate winner from a season that lasted more than a full year from start to finish. A season that saw political unrest between the NBA and China, the deaths of David Stern and Kobe Bryant,racial issues across the nation and, if that wasn’t enough, a pandemic.

So, an asterisk-bearing champion? Not a chance.

To the teams in the NBA, this championship might be the toughest one ever claimed. It’ll come after more than three months of living in a quasi-bubble at the Disney complex near Orlando, Florida, after an entire postseason is played without fans, with most if not all that time spent away from friends and family. And only one of the 22 teams headed to Disney will be able to say it was absolutely worth the trouble.

“I’ve heard a lot of people say that there’s going to be, like, a star next to this championship,” Milwaukee forward and reigning NBA MVP Giannis Antetokounmpo said. “I feel like at the end of the day this is going to be like the toughest championship you could ever win because the circumstances are really, really tough right now. So, whoever wants it more is going to be able to go out there and take it.”

He’s not alone in feeling that way.

Most of the 22 teams that will be headed to the Disney campus next week — the first arrivals are scheduled for July 7 — spent Wednesday beginning Phase 3 of the NBA’s restart process. Workouts are still individual, but now mandatory. No team can practice or play 5-on-5 until arriving at Disney. Teams won’t be back together, all at once, in person, until getting to Central Florida.

“I think this might be certainly the most worthy of all world championships in the NBA because of all the things that every team is going to have to navigate and overcome to be able to be crowned a champion," Miami coach Erik Spoelstra said.

The season has been daunting and won’t get any easier. That’s why Los Angeles Lakers coach Frank Vogel — whose team was in China when the political issues hit this fall, took the enormous emotional blow that followed Bryant’s death, has championed societal change during these troubled times in the country and has had players infected with the coronavirus — wholeheartedly agrees with Antetokounmpo’s stance.

“Our team has been through a lot this year,” Vogel said. “And we’ve endured, and we’ve come out strong each time we’ve faced adversity. I don’t know about other teams but if we were able to come through all of this and achieve the ultimate prize, I do think it deserves a harder-than-ordinary asterisk. If you’re going to put an asterisk on it, I don’t think it weakens it at all.”

There are elements of the restart that are not easy for anyone involved, such as the isolation from the outside world, the daily testing, and the highly restrictive rules that the NBA put in place after consultation with health officials.

“If you’re able to go into a bubble to be isolated from your friends and family, to have no home court advantage, to have a league interruption of four months, and you’re able to spend 90 days and come out of there a champion, I think this will be the toughest championship ever won,” Malone said. “There’s no asterisk. You win an NBA championship anytime, it’s a hell of an accomplishment. But in these circumstances, these unprecedented times, with everything going on ... I think it will be a remarkable accomplishment.”

Some may argue otherwise, but the 1999 championship by San Antonio after a 50-game regular season and the 2012 championship by Miami after a 66-game season — both shortened because of labor strife in the league — come with no formal asterisk attached. This NBA season will see the 22 remaining teams all play between 71 and 75 games before the playoffs, and the league’s plan is for a full four-round, best-of-seven-throughout postseason.

No one is being gifted a title this season.

“I saw (Houston guard) Austin Rivers said today, you know that the idea of an asterisk next to this championship, I think he said it exactly right,” Boston coach Brad Stevens said Wednesday. “This is going to be a super unique situation and whoever wins it is going to really earn it.”

Los Angeles Clippers coach Doc Rivers — Austin’s father — relayed a recent conversation he had with NBA Commissioner Adam Silver, who said if anything, the team that wins this title merits more than an asterisk.