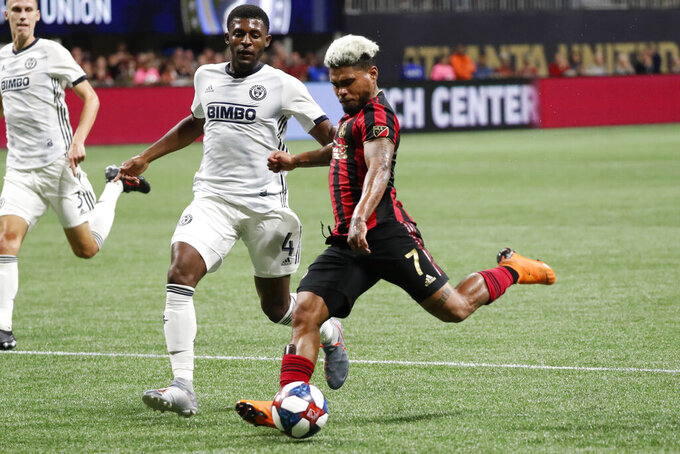 FILE - In this Oct. 24, 2019, file photo, Atlanta United forward Josef Martinez (7) scores a goal as Philadelphia Union defender Mark McKenzie (4) defends during the second half of an MLS soccer Eastern Conference semifinal in Atlanta. One of the most dynamic strikers in Major League Soccer history, and the face of Atlanta United's stunning rise to the top of the league, Martinez missed nearly all of last season recovering from a serious knee injury. (AP Photo/John Bazemore, File)

ATLANTA (AP) — Josef Martinez floated easily between Spanish and English, displaying the deftness he once showed with a soccer ball at his feet.

Clearly, he has expanded his language skills over the past year. He was justifiably proud of the work he's done.

“Hey, nobody say anything about my English!” he jokingly berated reporters during a Zoom call Friday.

Martinez hopes that no translation will be needed, either, when he steps back on the playing field for his first game in more than a year.

One of the most dynamic strikers in Major League Soccer history, and the face of Atlanta United's stunning rise to the top of the league, Martinez missed nearly all of last season recovering from a serious knee injury.

With Martinez on the sidelines, the league went through a long pandemic shutdown before finally resuming play in July. But United was not the same team without its top player, struggling to score goals, firing coach Frank de Boer, and plodding to a dismal finish with a listless, uninspired group that missed the playoffs for the first time in franchise history.

Martinez is eager to lead a resurgence in the A-T-L. The league opener is April 10 at rival Orlando.

“That was a very hard year for everyone, especially with everything that happened,” the 27-year-old Venezuelan said. “I'm working to be — I don't know if it's 100% — but to be able to train and hopefully for the first game. I'm OK. I'm feeling good.”

Martinez tore the ACL in his right knee during the league opener at Nashville, depriving United of a player who scored a then-record 31 goals and won the MVP award during its run to the MLS Cup title in 2018.

After going down, Martinez was barely able to watch — especially when he saw how far United tumbled without him.

The team won just six of 23 games, averaging a mere one goal per contest. Only Cincinnati scored fewer — an especially jarring comedown for a franchise that played a thrilling, offensive-minded style during its first two seasons under coach Tata Martino.

“I watched the first two games (of the MLS Is Back tournament) in Orlando, but after that I didn't watch any more,” Martinez said. “I'm not there to help and I get frustrated and I get mad. I don't like it when I get mad because I break my house.”

The grind of rehab — especially with the team struggling and so many restrictive protocols in place because of the pandemic — was also difficult. All sorts of doubts would creep into his head as he worked with head trainer Mario Cruz.

“I know it's a long year, but day to day the mentality is tough,” said Martinez, sporting a scruffy beard and a collection of jewelry running the length of his left ear. “In the mornings, I would talk to Mario and I'd say, ‘I don’t want to play anymore,' because in that moment I couldn't walk. Then in the afternoon, I feel OK — until the next day is another day.”

These days, Martinez is thrilled to be going through the monotony of preseason training under new coach Gabriel Heinze.

“I’m so happy to be back on the field and to enjoy it with my teammates,” Martinez said.

United has undergone a huge overhaul since entering the league in 2017, with Martinez among just a handful of players still around from that inaugural season.

He's also adjusting to his third coach in five seasons with the club.

“He is very tough,” Martinez said of Heinze. "He has a passion for what he is doing. He thinks he’s still a professional soccer player. If you don’t give 100%, he’ll kill you. You have to be ready for that. We have to be open to that intensity because that’s what we missed the last year. For the moment we’re tired, because we run a lot.”

Martinez is still struggling a bit with the transition from recuperating player to healthy player.

“The most difficult thing was returning to feel like a soccer player,” he said in Spanish. "The first days that I started to touch the ball were tough. They are still tough. It’s what I had to deal with.

"I’m not the first or last person who has had this injury. I’ve cried many times, even last week when I had my first scrimmage and when I go out to train I feel nostalgic because they were tough days. But you have to continue.”