Atlético and Sevilla to face 4th-division opponents in Copa 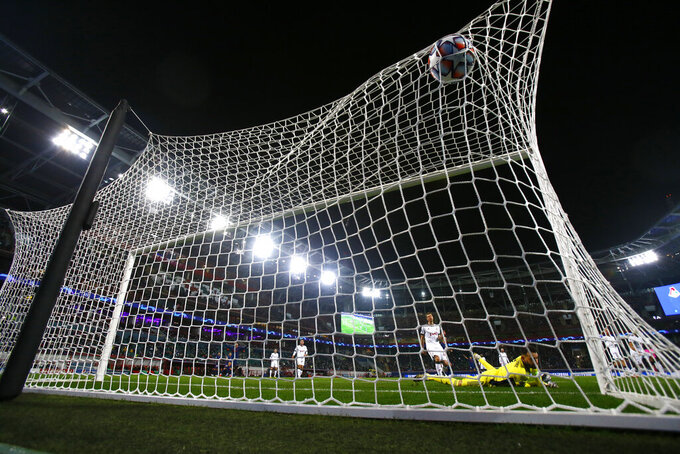 Lokomotiv's goalkeeper Guilherme dives but fails to save the goal from Atletico Madrid's Jose Gimenez during the Champions League Group A soccer match between Lokomotiv Moscow and Atletico Madrid in Moscow, Russia, Tuesday, Nov. 3, 2020. (Maxim Shemetov/Pool via AP)

MADRID (AP) — Atlético Madrid and Sevilla will face fourth-division opponents in the first round of the Copa del Rey.

Atlético will visit Cardassar and Sevilla will play at Ciudad de Lucena.

The four clubs who played in the Spanish Super Cup last season — Real Madrid, Barcelona, Athletic Bilbao and Real Sociedad — will not play in the initial rounds.

This year’s Copa del Rey will start before last season’s champion is crowned. The final between Basque Country rivals Athletic Bilbao and Real Sociedad was postponed because of the coronavirus pandemic. The clubs and the Spanish soccer federation agreed to play the match when fans are allowed back into stadiums. It has not been scheduled yet.

Valencia, the champion in the previous season, will visit fourth-division club Terrassa.

All first-round matchups will be played in one-game series in December, and with the lower division team hosting the match as long as its stadium meets the minimum requirements established by the Spanish soccer federation.