Atlético catching all the breaks in Champions League 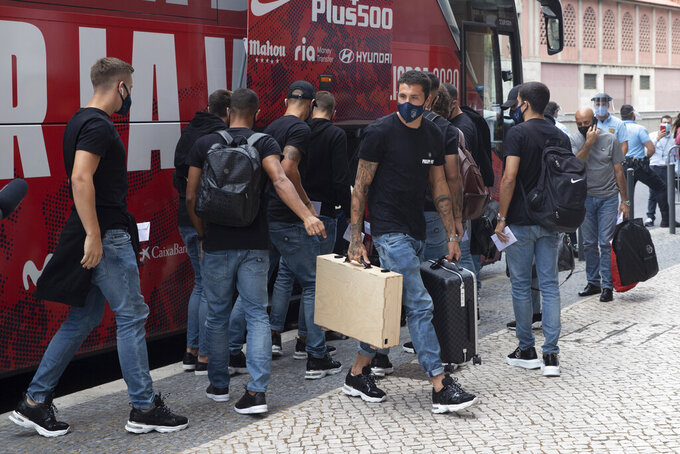 LISBON, Portugal (AP) — So far so good for Atlético Madrid in the quest for its first Champions League title.

Diego Simeone’s team has caught all the breaks going into the decisive final-eight tournament in Lisbon.

Old foes Real Madrid and Cristiano Ronaldo are gone. It drew Leipzig instead of a more traditional powerhouse for the quarterfinals. And its rival lost its top player after Timo Werner left for Chelsea. Even when things went wrong and the squad was hit by COVID-19, Atlético avoided the worst as only two players were infected and it could still make the trip to Portugal.

Things have been looking good for Simeone and his players.

A victory against Leipzig on Thursday will put Atlético back in the semifinals for the first time since it was eliminated by Ronaldo’s Madrid in the last four in 2017. Ronaldo and Madrid had defeated Atlético in the final in 2014 and 2016, and also ended the rival’s run in the quarterfinals in 2015.

Ronaldo again was Atlético’s nemesis last season after joining Juventus. Atlético lost to the Italian team in the round of 16 after Ronaldo scored a hat trick in the decisive second leg in Turin.

But this time Ronaldo and Juventus were eliminated by Lyon in the last 16, the same stage in which Madrid was knocked out of the tournament by Manchester City. Only two past champions are still left in the competition — Barcelona and Bayern Munich — and they play against each other in the opposite side of the draw, meaning Atlético could only meet one of them in the final.

Leipzig is a relative newcomer to the Champions League, having reached the group stage only twice. This is the first time it made it to the knockout round. It eliminated Tottenham in the round of 16, but now it won't count on top scorer Werner, who didn't extend his contract by a few weeks to finish the season with the German club before moving to Chelsea.

Atlético stunned defending European champion Liverpool in the last 16, advancing after a 3-2 win in England.

“The game against Liverpool will go down in history and was one of the best we’ve had in a long time,” Atlético striker Diego Costa said. “It gave fans high expectations and we will give our best to try to meet those expectations. Hopefully we will play well and luck will stay on our side.”

“They are very strong on the ball and know what they are about,” he said. “They have made it to the quarterfinals and have no pressure.”

There was a scare within Atlético this week when it announced two positive test results for COVID-19 among the group that was traveling to Lisbon. There were concerns that an outbreak within the club could have affected the team’s participation in the tournament in Portugal, but new tests showed that only Ángel Correa and Sime Vrsaljko were infected and the squad could travel to Lisbon.

Vrsaljko wasn’t even going to play because he is nursing an injury, while Correa isn't among Atlético’s top stars even though he led the team in assists this season.

After coming agonizingly close recently, Atlético hopes the breaks will keep going its way and that it will finally get to lift the coveted European trophy.