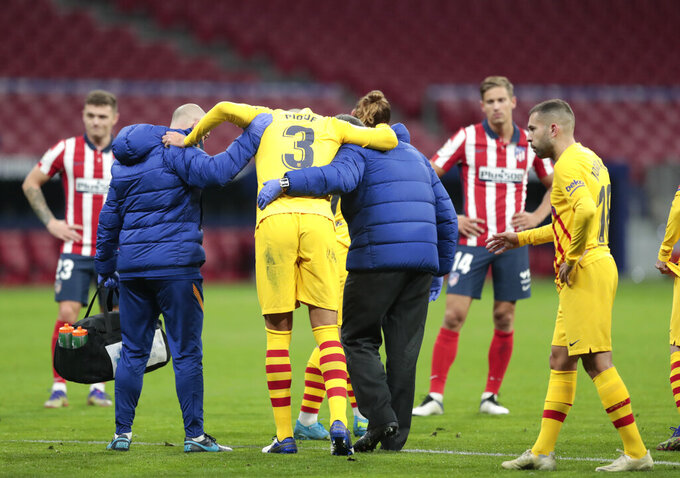 Barcelona's Gerard Pique is assisted from the pitch after getting an injury during the Spanish La Liga soccer match between Atletico Madrid and FC Barcelona at the Wanda Metropolitano stadium in Madrid, Spain, Saturday, Nov. 21, 2020. (AP Photo/Bernat Armangue)

BARCELONA, Spain (AP) — Atlético Madrid strengthened its status as the early front-runner in the Spanish league title race on Saturday after beating Barcelona and watching Real Madrid fall further behind.

Under coach Diego Simeone, Atlético knew what it was like to beat Barcelona in the Champions League and Copa del Rey, but it had been denied a victory over Lionel Messi’s side in the domestic league in 20 consecutive attempts.

Its first win over Barcelona in the competition since 2010 left it level on points with league leader Real Sociedad before the Basque Country club visits Cádiz on Sunday.

Ronald Koeman’s Barcelona was left languishing in 10th place at nine points back. Both Atlético and Barcelona have games in hand due to their late start to the season after playing in the Champions League quarterfinals in August.

“It’s true that we hadn’t beaten them in years, although we had been close. This is the payoff of working toward this victory,” Simeone said, while not wavering from his mantra of going ahead "game by game.”

“We always keep the same philosophy both in the good times and the bad: our focus is on the next match,” he said.

The long-awaited win came after a Madrid side debilitated by injuries and coronavirus infections dropped points for the second consecutive round when it drew 1-1 at Villarreal.

Adding to Barcelona’s injury problems, defense leader Gerard Pique suffered what his club called a right-knee sprain early in the second half when Ángel Correa fell onto his leg and made it buckle inwards.

Pique immediately called for help. He walked gingerly off on his own power, but he seemed to be in tears.

Barcelona was already without Ansu Fati for four months after he needed surgery on his left knee last week.

Two superb touches by Yannick Carrasco proved to be the key to Atlético breaking its decade of frustration against Barça.

After going close through Saúl Ñíguez and Marcos Llorente, the game at the Wanda Metropolitano tipped in the hosts' favor when Correa pounced on a bad pass by Pique and lobbed the ball forward for Carrasco breaking down the left flank. Marc-Andre ter Stegen rushed out to disrupt the counter-attack, but Carrasco used one deft touch to push the ball between the goalkeeper's legs. His next touch sent the ball from well outside the box into the open net.

“It is worrying how we conceded the goal,” Koeman said. “A big team cannot concede goal like that, in minute 47 and with the ball."

Lionel Messi tried to rally his team with crosses for Clement Lenglet and Antoine Griezmann, whose headers were easily saved by Jan Oblak.

Otherwise, Atlético played the game it loves: putting a stranglehold on the opposing attack and letting the clock do the rest.

“The league is still long and there are a lot of games left, but this defeat leaves us needing to string together a long run of wins," Koeman said.

Without Sergio Ramos’ leadership and Karim Benzema’s scoring touch, Zinedine Zidane’s Madrid had to hold on for a point at El Estadio de la Cerámica.

Madrid made a promising start when rarely used striker Mariano Díaz did well to head in a cross from Dani Carvajal three minutes after kickoff.

Madrid controlled the rest of the first half, but Unai Emery’s Villarreal improved after the restart.

The equalizer came when Courtois swept Samuel Chukwueze off his feet in the box trying to dispute a ball. Gerard Moreno stepped up to convert the resulting penalty in the 76th.

“Drawing with the defending champions can leave you satisfied, but the way we were playing left me with the feeling that the game was ours to win,” Emery said.

Villarreal is in third place at one point off the pace.

Madrid was missing Ramos, Benzema and Federico Valverde because of injury. Casemiro, Éder Militão and Luka Jovic were unavailable after testing positive for the coronavirus. But it still had a starting 11 including Eden Hazard, Luka Modric, and Toni Kroos, and Zidane used Francisco “Isco” Alarcón and Marco Asensio as substitutes.

Madrid, which lost 4-1 at Valencia in the previous round before last week’s international break, stayed in fourth place with a game in hand.

Vaclik denied Santi Mina from close range before Sevilla pushed for a winner.

Sergio Escudero’s long shot took a deflection off a defender and looped over Celta ’keeper Ruben Blanco in the 85th. Munir El Haddadi got a fourth goal after his strike also hit a defender to fool Blanco.