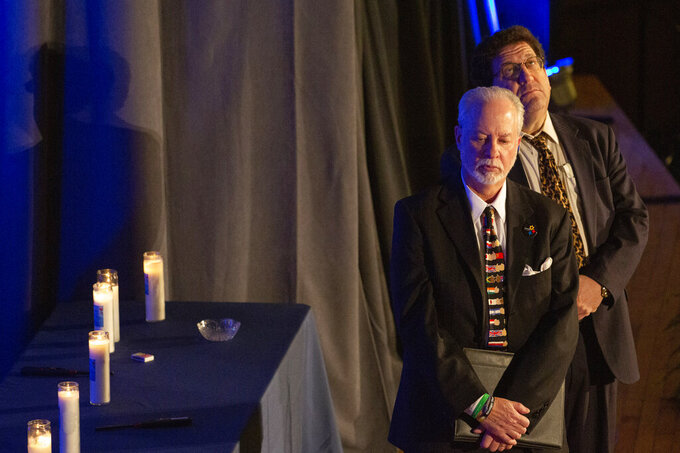 FILE - In this Sunday, Oct. 27, 2019 file photo, Rabbis Jeffrey Myers, left, of Tree of Life/Or L'Simcha Congregation and Jonathan Perlman of New Light Congregation wait on stage before speaking to standing-room only crowd gathered for the one-year commemoration of the Tree of Life synagogue attack, at Soldiers & Sailors Memorial Hall and Museum in Pittsburgh. Since March 2020, Tree of Life has halted all in-person worship and group activities. However, Rabbi Myers has made appearances on Zoom and Facebook, livestreamed from his living room. “During the pandemic, people are seeking community,” he said. “We try in any way to help them find solace and hope and inspiration.” (AP Photo/Rebecca Droke)

Two years ago, the three congregations sharing space at Pittsburgh’s Tree of Life synagogue relocated after an anti-Semitic gunman killed 11 worshippers. Last March, the congregations dispersed from their new locations due to the coronavirus pandemic and switched to virtual services.

On Tuesday, as they again mourn those killed on Oct. 27, 2018, they’ll also celebrate the resilience that has enabled them to persevere.

Maggie Feinstein of the 10.27 Healing Partnership, which has been supporting those affected by the attack, was impressed by how the congregations have coped with the pandemic.

“They started phone chains, thought about ways to reach their vulnerable population,” she said. “I found it incredibly inspiring that these three congregations, when crisis hit, knew how to pull together as a community and not leave anybody behind.”

The centerpiece of the commemorations is an online ceremony Tuesday evening that includes a performance by world-renowned cellist Yo-Yo-Ma of a piece by Jewish composer Ernest Bloch.

And a day of community service is being organized for Sunday by the Pittsburgh branch of Repair the World, a Jewish nonprofit. Activities include a blood drive, food distribution and cleanups of Jewish cemeteries.

Coinciding with the commemoration will be publication of an anthology of essays by Pittsburgh-area writers, reflecting on how the attack impacted them and their community. Co-editor Beth Kissileff is the wife of Rabbi Jonathan Perlman, who took shelter in a supply closet with three members of his New Light congregation during the attack. One of them, 87-year-old Melvin Wax, who was hearing impaired, as a result left the closet before it was safe, and was shot dead.

Most of the commemorations were planned by a group that included the Jewish Federation of Greater Pittsburgh, the Jewish Community Center and members of the three congregations. One of the group’s co-chairs lost her brother in the shooting; the other lost her mother.

Organizers have strived to offer emotional support. One-on-one counseling will be offered virtually, and there's a tent set up near the synagogue where people can access in-person support from humans and comfort dogs in a socially distanced environment.

“Once you can’t do everything in-person, there aren’t as many opportunities for healing,” she said. “Last year we had chaplains, therapists helping people face-to-face. That can’t happen this year.”

Of the three congregations based in the synagogue in 2018, only Tree of Life, the host, plans to return when the building reopens after renovation. There’s no timeline yet for that project; the congregation has hired consultants to help with logistics and wants to accommodate other organizations and activities.

Nearby Chatham University and the Holocaust Center of Pittsburgh are expected to share some of the reconfigured space. There also will be a memorial to those killed in the attack.

Before the pandemic, Tree of Life was holding services at Rodef Shalom, a historic temple completed in 1907. But since March, in-person worship and group activities have been halted in favor of virtual gatherings.

Rabbi Jeffrey Myers said his appearances on Zoom and Facebook, livestreamed from his living room, have gained a loyal following, including a woman in Australia who joins Tuesday classes in which he discusses prayers offered the preceding Friday.

“During the pandemic, people are seeking community,” he said. “We try in any way to help them find solace and hope and inspiration.”

A second congregation, Dor Hadash, also had been worshipping at Rodef Shalom and plans to return there once the pandemic eases enough to allow in-person services, according to its president, Donna Coufal.

The third, New Light, had been at the Beth Shalom synagogue in the same Squirrel Hill neighborhood where the attack occurred. Congregation co-president Stephen Cohen said the arrangement has worked well and New Light plans to remain there long-term.

Of the three, only New Light has resumed in-person services, but Cohen said most members, many of whom are over 70, remain wary and participate via Zoom. The 15 or so who attend in person wear masks and sit at least 6 feet apart.

“Before March we were beginning to recreate our community, and then on March 23 it all falls apart,” Cohen said, referring to the imposition of a stay-at-home order. “We have adapted as best we can."

The idea for the anthology arose from conversations among New Light members, encouraged by Kissileff, an author and essayist. She recruited as co-editor Eric Lidji, a Pittsburgh-based historian who has overseen efforts to preserve documentation of the 2018 attack.

They in turn brought in 22 other writers, journalists, academics and rabbis to contribute to the anthology, “Bound in the Bond of Life.”

The entries include poetry, oral history and an essay by Carnegie Mellon University historian Laura Zittrain Eisenberg about the memorials that sprung up outside the synagogue after the attack and items left there — flowers, candles, a guitar, a pair of sneakers.

“I wanted to acknowledge this didn’t just affect the Jewish community,” Kissileff said.

In his essay, “I Read Somewhere That Pittsburgh is Stronger Than Hate,” Norman, who is Black, evoked other mass shootings such as the 2015 attack by a racist gunman that killed nine Black people gathered for Bible study at Emanuel AME Church in Charleston, South Carolina.

“We know that there’s hate in Pittsburgh,” Norman wrote. “But as the Tree of Life massacre showed us, there is also considerable pushback to evil. While much of the nation was still in shock, the seeds of an extraordinary response took root in a city often divided by race and class.”