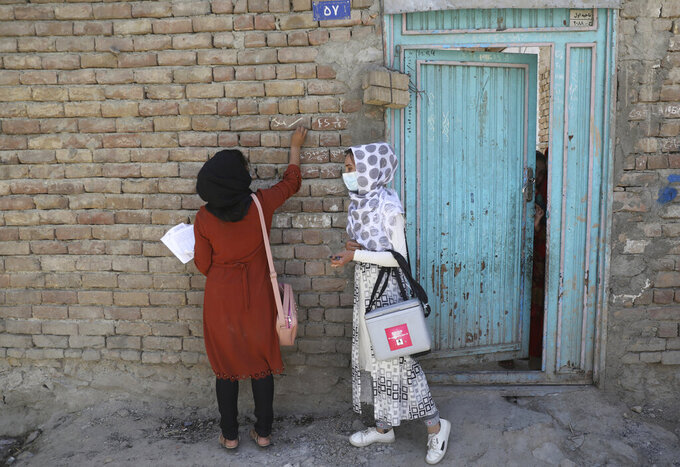 A health worker makes a mark on the door of a house after vaccinating the children of the family during a polio campaign in the old part of Kabul, Afghanistan, Tuesday, June 15, 2021. Gunmen on Tuesday targeted members of polio teams in eastern Afghanistan, killing a number of staffers, officials said. (AP Photo/Rahmat Gul)

No militant group immediately claimed responsibility for the attacks that took place in the city of Jalalabad and the nearby districts of Khoyani and Surkhrud, according to Attaullah Khogyani, spokesman for the governor in Nangarhar province. Jalalabad is the provincial capital.

Along with the five killed, at least four members of the polio vaccination teams were wounded, said Dr. Jan Mohammad, who coordinates the anti-polio drive for the country's east. Khogyani called the attacks cowardly, adding that two of the wounded were in critical condition.

The polio vaccination campaign in Nangarhar province was suspended later Tuesday, said Najibullah Kamawal, operational chief for the eastern provinces. It wasn't clear when or if it would resume.

Afghanistan and neighboring Pakistan are the only two remaining countries in the world where polio is endemic, after Nigeria was last year declared free of the virus.

In March, the Islamic State group said it shot and killed three women who were part of a polio vaccination team, also in Jalalabad, the capital of Afghanistan's Nangarhar province.

The IS affiliate is headquartered in eastern Afghanistan and while the Sunni militant group's numbers are believed to have gone down after recent government offensives and clashes with the rival Taliban, IS militants have lately stepped up attacks on minority Shiite Muslims.

IS has also taken responsibility for several targeted killings that have taken aim at the country's nascent civil society, as well as journalists and legal professionals.

Though struggling with a new, third surge in coronavirus cases, the Afghan government has in recent months sought to inoculate 9.6 million children against polio with the help of UNICEF. In 2020, Afghanistan reported 54 new cases of polio.

The latest surge in COVID-19 infections has overwhelmed Afghanistan's war-ravaged health care system, with oxygen supplies running out and well behind on vaccine supplies. As of Monday, Afghanistan has recorded more than 93,000 cases — with more than 3,600 new cases in the past 24 hours. There have also been 3,683 deaths. It's widely accepted that the numbers are massively underreported because Afghanistan conducts barely 8,000 tests a day and often much less.

The increased violence and chaos comes as the U.S. and NATO are completing their military withdrawal from Afghanistan. The estimated 2,500-3,500 U.S. soldiers and 7,000 NATO allied troops are to be gone by Sept. 11 at the latest, though there are projections they may be gone by mid July.

Though not uncommon in Afghanistan, attacks on polio vaccination teams are more frequent in Pakistan, where the Pakistani Taliban and other militants regularly stage attacks on polio teams and security forces escorting them. They also target vaccination centers and health workers, claiming that anti-polio drives are part of an alleged Western conspiracy to sterilize children or collect intelligence.

Last week, two policemen who were providing security to polio vaccinators were shot and killed in northwest Pakistan.

These attacks increased after it was revealed that a fake hepatitis vaccination campaign was used as a ruse by the CIA in the hunt for al-Qaida leader Osama bin Laden. Bin Laden was killed by U.S. commandos in 2011 in Pakistan.