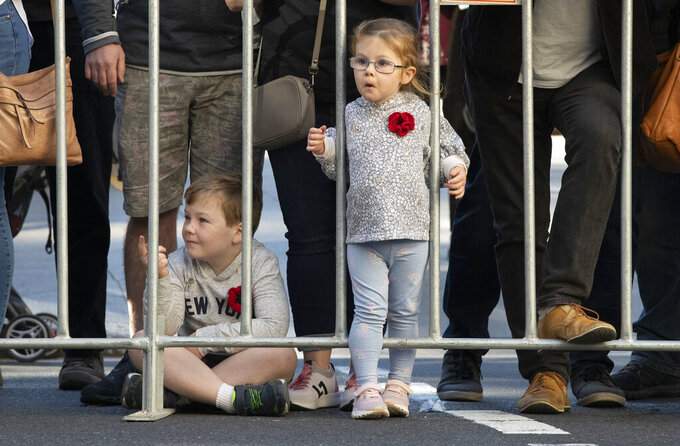 Children watch as veterans march in the Anzac Day parade in Sydney, Australia, Sunday, April 25, 2021. Australians and New Zealanders paid tribute to their war dead Sunday as both nations prepared to withdraw from their longest war in Afghanistan. (AP Photo/Mark Baker)

CANBERRA, Australia (AP) — Australians and New Zealanders paid tribute to their war dead Sunday as both nations prepared to withdraw from their longest war in Afghanistan.

The neighboring countries commemorate Anzac Day every April 25, the date in 1915 when the Australian and New Zealand Army Corps landed on Turkey in an ill-fated campaign that provided the soldiers’ first combat of World War I.

New Zealand will withdraw its last troops from Afghanistan in May and Australia in September in line with U.S. plans to end the 20-year-campaign.

Australian Defense Minister Peter Dutton said the withdrawal allowed Australia to focus on its own region, where China was changing the security environment.

“Our focus now ... is to our own region, to providing support to our near neighbors,” Dutton told Nine Network television, referring to natural disaster and pandemic relief.

“We need to recognize our region is changing. China is militarizing ports across our region. We need to deal with all of that, and that’s exactly what we’re now focused on,” Dutton added.

After the public was banned because of the pandemic from last year’s Australian commemorations, thousands gathered for a dawn service in downtown Brisbane without restrictions on numbers, with little evidence of social distancing and with few people wearing masks.

Commemorative events were canceled in the city of Perth because of a three-day lockdown that started Saturday due to recent coronavirus infections. Western Australia state Premier Mark McGowan and thousands of others remembered the fallen in dawn ceremonies on their own on driveways, as they did last year.

Melbourne, Australia’s second-largest city that last year became the nation’s worst pandemic hot spot, recently lifted its Anzac Day march limit from 5,500 to 8,000 after veterans complained that more than 75,000 spectators would be allowed to attend an Australian Rules Football match in Melbourne on the same day.

Given Australia’s relative success in preventing COVID-19 from spreading in the community, veterans have complained that pandemic restrictions have been excessive in parts of the country. Services and marches were livestreamed for those who could not attend or did not wish to take the infection risk of attending.

Sydney, Australia’s largest city, limited its march to 10,000 people. A Maori choir sang at a Sydney dawn service in a mark of the intrinsic link that Anzac Day brings to the two nations.

A soldier played a didgeridoo for the first time at the dawn service the Australian War Memorial in the national capital Canberra, in recognition of the sacrifices of indigenous Australians in war.

That service has attracted up to 40,000 people in past years. This year, it was a ticketed event with a limit of 4,200 people.

“It has been our longest war. The world is safer from the threat of terrorism than when the Twin Towers were felled almost 20 years ago, but we remain vigilant. However, this has come at a great cost,” Morrison said.