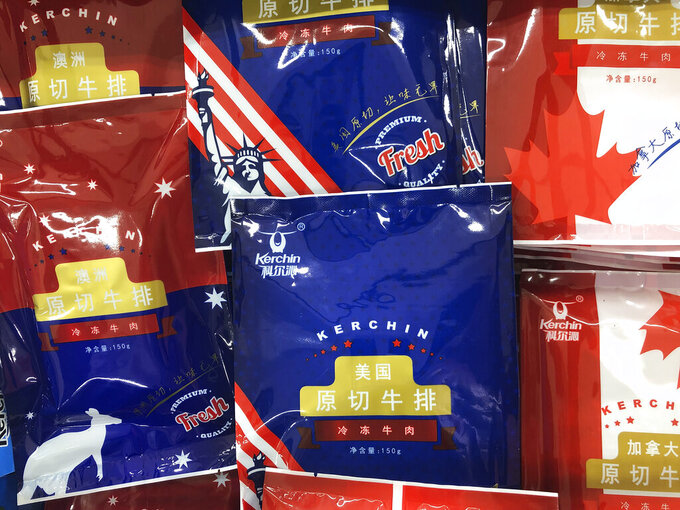 In this May 14, 2019 photo, packages of frozen beef filets from Australia, left, the United States, center, and Canada, right, are for sale at a supermarket in Beijing. China has too much at stake to destroy its trading relationship with Australia entirely but is using sanctions to send a sharp warning to the South Pacific nation about its calls for a robust coronavirus inquiry, an expert says. China has suspended beef imports from four Australian slaughterhouses and is threatening to impose huge tariffs on barley after Australia called for independent inquiry into the origins of the virus. (AP Photo/Mark Schiefelbein)

CANBERRA, Australia (AP) — Australia’s trade minister said Tuesday that his country does not want a trade war with China, but maintained Beijing had erred by imposing stiff tariffs on Australian barley in what is widely seen as punishment for advocating an investigation into the coronavirus pandemic.

China effectively ended imports of Australian barley by putting tariffs of more than 80% on the crop, accusing Australia of breaching World Trade Organization rules by subsidizing barley production and selling the crop in China at below production costs. The move came a week after China banned beef imports from Australia’s four largest abattoirs over labeling issues.

“Australia is not interested in a trade war. We don’t pursue our trade policies on a tit-for-tat basis,” Trade Minister Simon Birmingham told reporters. “We operate according to the trade rules that we strongly support.”

Birmingham said China “has made errors of both fact and law” in applying WTO rules, adding that there was no evidence that Australia was engaged in dumping of products.

The trade dispute has coincided with Australia's push for an international investigation into the origins of the coronavirus pandemic and responses to it. Beijing has denied they are related.

The World Health Organization bowed to calls Monday from most of its member states to launch an independent probe into how it managed the international response to the virus, which was first found in China late last year. The evaluation would stop short of looking into contentious issues such as the origins of the virus.

Chinese President Xi Jinping said China supports the idea of a comprehensive review of the global response to COVID-19 and it should be “based on science and professionalism led by WHO, and conducted in an objective and impartial manner.”

Australia has been seen as a leader in rallying global support for an inquiry, attracting Chinese criticism that it is parroting the United States and inviting a Chinese boycott of exports and services.

The Chinese Embassy in Australia said Tuesday that the WHO consensus reached by its decision-making body, the World Health Assembly, in Geneva did not vindicate Australian calls for an investigation.

“The draft resolution on COVID-19 to be adopted by the World Health Assembly is totally different from Australia’s proposal of an independent international review,” an embassy statement said.

“To claim the WHA’s resolution a vindication of Australia’s call is nothing but a joke,” the statement added.

In Beijing, Foreign Ministry spokesperson Zhao Lijian called on Australia to “completely abandon political manipulation and return to the general consensus of the international community,” which China believes is for an eventual investigation once the pandemic is contained.

But Zhou said he suspects the Chinese decisions on beef and barley are because of Australia’s advocacy for the coronavirus investigation.

His suspicion was bolstered by China’s decision to set the anti-dumping tax at 73.6% — far higher than the 56% that Chinese industry had requested. Beijing also imposed a 6.9% anti-subsidy tax.

Cheng told The Australian Financial Review that Australia might face a Chinese boycott of its tourism and exports of wine, beef and other goods if the government pressed for a coronavirus inquiry.

China is the No. 1 market for Australian beef, accounting for about 30% of exports.

“Others can debate whether or not there's a linkage,” Birmingham said.

Beijing has regularly used access to its huge market as leverage against governments from Norway to Canada in political disputes over the past decade. Chinese officials routinely refuse to confirm a trade disruption is related to a political clash but make it clear Beijing wants concessions.

“It’s a really bitter pill to swallow,” Weidemann said. “It’s a real dent in our economy and it will have a big impact.”