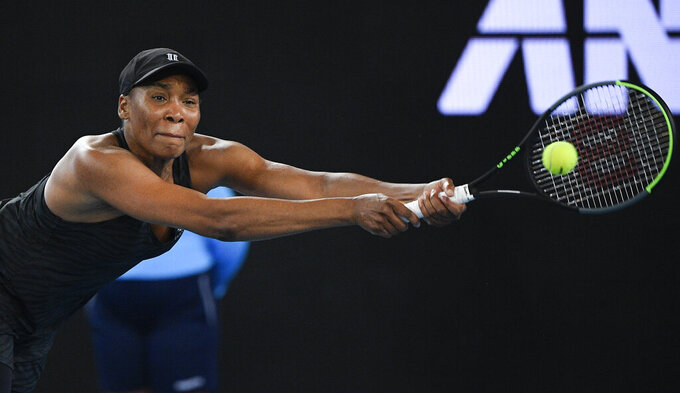 A glance at the Australian Open, the first Grand Slam tennis tournament of 2021:

The 14-day tournament begins Monday morning in Australia (Sunday evening EST). The women’s singles final is Feb. 20, and the men’s singles final is Feb. 21; both are to begin at about 7:30 p.m. in Australia (3:30 a.m. EST). Like at the U.S. Open, there are separate day and night sessions. The tournament is beginning three weeks after originally scheduled, a change made because of the coronavirus pandemic.

Sisters Serena and Venus Williams are scheduled to play first-round matches during the initial day session of the Australian Open — so both probably will be on court while the Super Bowl is being played back home in the United States. And they’re only two of no fewer than a dozen owners of Grand Slam singles titles who are slated to be in action as the 2021 Grand Slam season gets started, three weeks later than originally planned. That group includes Djokovic, who has won eight of his 17 major trophies at Melbourne Park, 2019 champion Naomi Osaka and other past winners such as Stan Wawrinka and Angelique Kerber. Bianca Andreescu, the 2019 U.S. Open champion who has been sidelined for 15 months, makes her return against Mihaela Buzarnescu. After Osaka opens play in Rod Laver Arena with a potentially tricky contest against 39th-ranked Anastasia Pavlyuchenkova, a quarterfinalist three of the past four years in Melbourne, 39-year-old Serena Williams begins her latest chance to get Slam No. 24 by going up against 51st-ranked Laura Siegemund (Williams is 2-0 head-to-head) on the tournament’s top stage. Older sister Venus, 40, a seven-time major champion but never in Australia, is first up at Margaret Court Arena against Kirsten Flipkens, a 35-year-old former member of the Top 10 but now ranked 87th (they are 2-2 head-to-head). Djokovic highlights the night session at Rod Laver Arena, meeting 66th-ranked Jeremy Chardy after two-time major champ Simona Halep takes on 140th-ranked Lizette Cabrera, a wild-card entry from Australia.

Kenin faced three break points while serving at 2-all, love-40 in the third set, but pulled out that game and the last four games of the final to beat two-time major title winner Garbiñe Muguruza 4-6, 6-2, 6-2. It gave Kenin her first Grand Slam trophy and made her, at age 21, the youngest champion at Melbourne Park since Maria Sharapova was 20 in 2008. In the men’s final, Djokovic came back to edge Dominic Thiem 6-4, 4-6, 2-6, 6-3, 6-4 for an eighth Australian Open championship, second in a row, and 17th Grand Slam title overall. Djokovic did it with grit and some guile, serve-and-volleying twice when facing break point.

Most notable for his absence is Roger Federer, the 20-time Grand Slam champion -- including five titles at Melbourne Park -- who has been sidelined for more than a year after having two knee operations. He has not competed since losing to Djokovic in the 2020 Australian Open semifinals, but intends to make a comeback next month. If Rafael Nadal wins this year’s Australian Open, he would break a tie with Federer for most Slam singles titles for a man. Also missing is Andy Murray, who has won three major trophies elsewhere and is a five-time runner-up in Australia; he tested positive for COVID-19 last month and determined there was no way to quarantine properly and be able to compete now. Instead, he is planning to enter a lower-level Challenger Tour event in Italy. Among those missing from the women’s side is 2017 U.S. Open runner-up Madison Keys. Two coaches of prominent players did not make the trip to Australia: Carlos Moya, who works with Nadal, and Nicolas Massu, who works with Thiem.

72 — Players subjected to a “hard quarantine” in January — meaning they were not allowed to leave their hotel rooms for two weeks — because someone on their flight to Australia tested positive for COVID-19 upon arrival.

Total: 71.5 million Australian dollars, the same as last year (currently worth about $55 million).