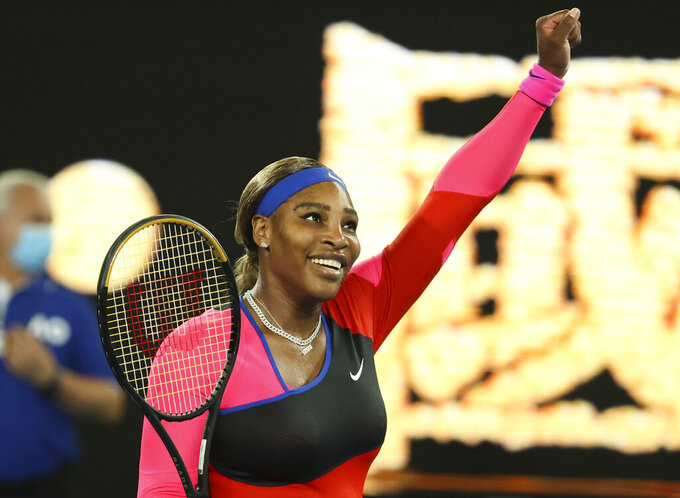 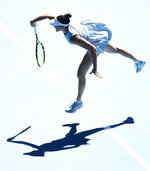 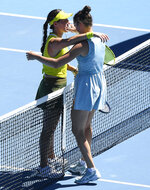 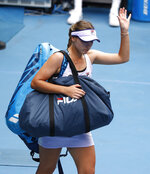 MELBOURNE, Australia (AP) — Jennifer Brady was one of 72 Australian Open entrants forced into a two-week hard quarantine — no leaving the hotel room at all, for any reason — because they potentially were exposed to COVID-19 on chartered flights bringing them to the country in January.

And Brady is the only one who made it all the way to the singles semifinals at Melbourne Park.

The 25-year-old American thinks the unusual experience might even have helped her perform as well as she did along the way to a matchup in the final four on Thursday night against Karolina Muchova of the Czech Republic.

“Mentally I was feeling a little bit fried, to be honest. I think I used that two weeks to kind of reset mentally and also physically — just give myself, my mind, my body, a little bit of a rest," said the 22nd-seeded Brady, who is from Pennsylvania and played college tennis at UCLA.

Either Brady or Muchova will reach her first Grand Slam final. Brady did get to the semifinals at the U.S. Open in September before losing at that stage to eventual champion Naomi Osaka.

“I would say I didn’t really have high expectations on myself to do well,” said Brady, who beat Jessica Pegula 4-6, 6-2, 6-1 in an all-American matchup in the quarterfinals between friends and past doubles partners. “I came out of the quarantine, and then we were lucky enough to have a separate tournament for us who were in the hard lockdown. I was lucky to get a couple matches in there before starting here in the Australian Open.”

Now she’s caught up to him in another statistic: most match wins at major tournaments.

Williams’ 6-3, 6-3 victory over Simona Halep in the Australian Open quarterfinals was the 39-year-old American’s 362nd time winning a Grand Slam contest. That is the exact same number reached so far by Federer, who also will turn 40 later this year.

Federer sat out the Australian Open, meaning it’s been more than a year since he has competed on tour. He had two knee operations last season.

The 22-year-old American posted on Twitter that she went to see the tournament doctor this week with “acute abdominal pain.” She wrote that the doctor sent her to a hospital, where she was diagnosed with acute appendicitis after a medical scan.

The surgery was Monday, Kenin wrote.

She lost to Kaia Kanepi in straight sets in the second round of her title defense at the Australian Open last week. Then Kenin entered a lower-level WTA event held at the same site in Melbourne and dropped her opening match Saturday against Australian teenager Olivia Gadecki.

Barbora Krejcikova will prepare for the women's doubles final at the Australian Open by playing an important match in the mixed competition.

And Krejcikova will partner American Rajeev Ram in a mixed doubles semifinal on Thursday, a day before she partners fellow Czech Katerina Siniakova in the women's doubles final against second-seeded Elise Mertens and Aryna Sabalenka.

“I feel exhausted and really relieved," Krejcikova said after spending nearly four hours on court on Wednesday. "I love playing tennis and it has been a long day, but I’m so happy,”

Third-seeded Krejcikova and Siniakova needed two hours for a 3-6, 6-2, 6-4 win over Darija Jurak and Nina Stojanovic, who upset the top-seeded Hsieh Su-Wei and Barbora Strycova in the first round.

Joachim Gerard won the men's wheelchair singles final to become the first Belgian player to win a singles title at a Grand Slam tournament since Kim Clijsters in 2011.

He needed seven match points to finally ease past Alfie Hewett 6-0, 4-6, 6-4 in a fluctuating final.

Gerard watched a 6-0, 4-0 lead slip away as Hewett rallied, trying to add the singles title to his doubles success with compatriot Gordon Reid the previous day.

“When I lost the second set I said ‘OK, if I want to win this match, I need to hit my ball stronger and make him move more.’ And that's what I did," Gerard said. "I waited for it for so many years ... it means so much to me.”

Even her opponent, Yui Kamiji of Japan, went to the net to congratulate her. That’s until the chair umpire intervened to announce the extended third-set tiebreaker wasn’t complete with De Groot leading 7-4.

“I don’t think anyone out there, not my opponent, not the people watching, nobody at home, not myself, knew that it was a 10-point tiebreaker," she said. “I really had to refocus and go back and think to myself I can do it to 7-4, I can do it to 10.”