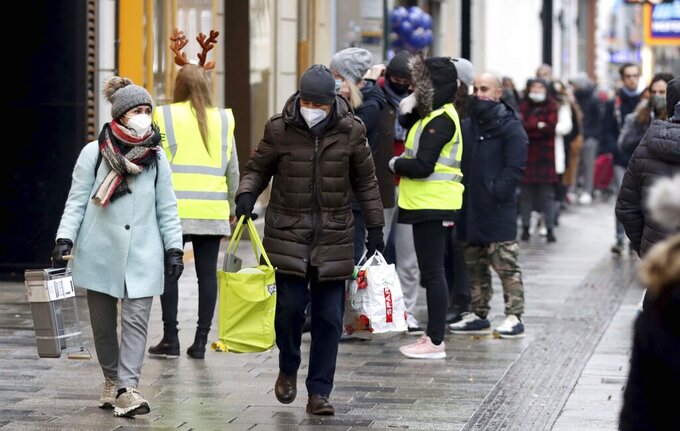 People line up in front of a shop after the stores reopen after a lock down in Vienna, Austria, Monday Dec. 7, 2020., 2020. The Austrian government has moved to restrict freedom of movement for people, in an effort to slow the onset of the COVID-19 coronavirus. (AP Photo/Ronald Zak)

VIENNA (AP) — Austrians lined up to enter stores on Monday as the country relaxed its coronavirus lockdown, allowing nonessential shops to reopen after three weeks. But many restrictions remain in place, and the country's leader advised people against all rushing to the shops at once.

Tough lockdown measures took effect Nov. 17. The government decided last week that enough progress had been made in cutting coronavirus infections to relax some restrictions.

Schools were reopened, except for older students, as were museums, libraries and some other businesses such as hairdressers. But restaurants remain closed for all but takeout and deliveries, as do bars, and hotels are only open to business travelers.

Small lines formed outside shops in Vienna on Monday as retailers opened their doors.

“We are channelling the stream of customers at the entrance," said Thomas Koeckeritz, the creative director at the Steffl department store. “That means there’s one area which customers can use to enter the shop and another one by which they can leave again.”

The store also is frequently disinfecting areas such as cash registers and escalators, he added.

The reopening may to some extent salvage retailers' Christmas season. But “the losses that have accumulated since March cannot be compensated anymore,” Koeckeritz said, putting the figures for his company in the “two-digit millions” of euros.

Officials are keen to avoid big crowds of people at shopping malls.

Chancellor Sebastian Kurz appealed to Austrians on Monday to “spread out (their) desire to shop,” the Austria Press Agency reported.

“There are a lot of days until Christmas,” he said. “The sun keeps rising. The shops keep opening on the next day.”

A limited curfew that had applied around the clock since mid-November has now been eased, and applies only between 8 p.m. and 6 a.m.

However, Kurz said last week that the tourism and catering sectors won’t start reopening until Jan. 7.

Ski areas are allowed to open from Dec. 24 but effectively only for locals on day trips over the holiday season, because Austria will require most people entering the country to go into quarantine.

Austria is currently recording 253.8 new infections per 100,000 residents over seven days. That's down from from over 500 last month, but still considerably higher than in neighboring Germany, where a milder partial shutdown has more or less stabilized infections but failed to bring them down.