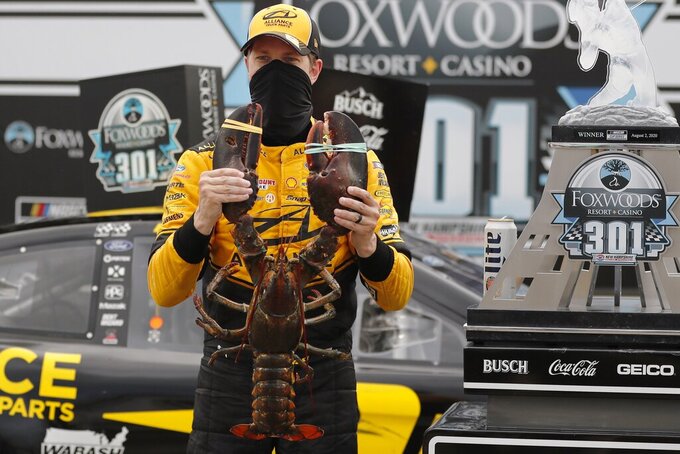 Last year: Joey Logano won the spring race from the pole and Kevin Harvick won in the fall after starting second

Last race: Brad Keselowski led a race-best 184 of the 301 laps in New Hampshire and won for the third time this season, the fifth consecutive year he has won at least three races.

Fast facts: Kevin Harvick still leads the point standings, now by 81 over Keselowski and 115 over Denny Hamlin. ... Harvick has finished in the top 10 in 17 of 20 races. ... Hamlin leads all drivers with five victories and Harvick has four. ... Keselowski, the 2012 series champion, has signed a contract extension with Team Penske that covers the 2021 season.

Last race: Brandon Jones surged from seventh to victory at Kansas after an overtime restart, depriving Austin Cindric of a record-tying fourth consecutive victory in the series.

Fast facts: Cindric leads the point standings by just four points over Chase Briscoe with Noah Gragson another 52 points off the pace. ... Briscoe has won a series-high five of 17 races. ... Series regulars have won all but two of the races.

Fast facts: Hill leads the point standings by 43 over Ben Rhodes. ... Series regulars have won only half of the 10 races run so far this season. ... Kyle Busch has won three times in five starts. ... Christian Eckes and Zane Smith share third place, 50 points back.

Last race: Hamilton won his third consecutive race and for the seventh time on the Silvertstone Circuit, beating Max Verstappen by nearly 6 seconds.

Fast facts: Hamilton has opened a 30-point lead on Mercedes teammate Valterri Bottas after four races. Verstappen is another six points off the pace. ... Hamilton's three consecutive victories have come after Bottas won the season-opener. ... Hamilton has won 16 of the last 27 races overall dating to the last two races of the 2018 season.

Series note: A doubleheader weekend set for Saturday and Sunday at Mid-Ohio was postponed because of a spike in coronavirus cases throughout the nation.

The series will race Friday and Saturday at Federated Auto Parts Raceway in Pevely, Missouri