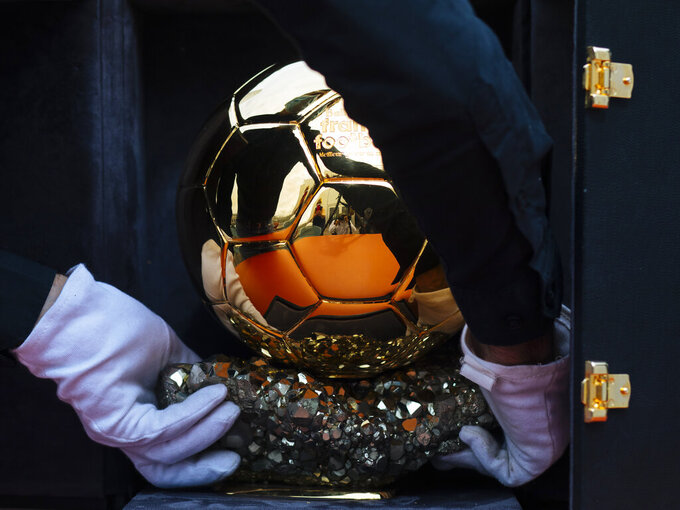 The Ballon d'Or award in Boulogne-Billancourt, outside Paris, Friday, July 17, 2020. The prestigious Ballon d’Or will not be awarded this year because the coronavirus pandemic has disrupted the soccer season. Awarded by France Football magazine, the Ballon d’Or has been given out every year since Stanley Matthews won the first one in 1956. Lionel Messi has won it a record six times — one more than longtime rival Cristiano Ronaldo. (AP Photo/Kamil Zihnioglu)

The prestigious Ballon d’Or will not be awarded this year because the coronavirus pandemic has disrupted the soccer season.

Awarded by France Football magazine, the Ballon d’Or has been given out every year since Stanley Matthews won the first one in 1956. Lionel Messi has won it a record six times — one more than longtime rival Cristiano Ronaldo.

The magazine started giving out a women's award in 2018, but that has also been put on hold.

“It’s such a strange year that we couldn’t treat it as an ordinary one. Let’s say that we started talking about (making the decision) at least two months ago,” France Football editor Pascal Ferré told The Associated Press in a telephone interview.

“It isn’t a decision we took lightly but we had to accept it couldn’t be a normal or typical Ballon d’Or winner, and what really worried us it that it wouldn’t be fairly awarded.”

Because the game’s rules have been modified during the pandemic, the award itself was impacted.

“The season started with certain rules and ended with other rules. In January and February, soccer was played in front of full stands. Then from May and June it was with empty stands,” Ferré said. “Then we had the five substitutes rule and not three. Then other changes happened in terms of the competitions, notably the final eight (eight-team knockout format) for the Champions League when it had started with home and away legs.”

With the European Championship and the Copa America postponed this year, the Champions League would have massively weighed on the award’s outcome but with a format inadvertently providing a shortcut for an eventual victor.

“The Ballon d’Or would have been decided over just three games: quarterfinal, semifinal, final,” Ferré said. “There were loads of changes (to soccer’s rules) which are totally legitimate and which we don’t contest given the worldwide health crisis, but we couldn’t consider this as a typical year. Exceptional circumstances led to an exceptional decision.”

The Kopa Trophy for the best player under 21 and the Lev Yashin award for best goalkeeper have also been canceled this year, Ferré said.

Ronaldo, who will be 36 in February, can still win an Italian league-Champions League double with Juventus this season, but he is not the only player affected by France Football's decision.

“Look at Lewandowski’s performances this year, his form has been at the level of Messi and Ronaldo,” Ferré said. “And Paris players, imagine if they win the Champions League.”

To maintain the award’s authenticity and level of suspense, players were not informed of the decision before the announcement.

“We are independent and autonomous enough not to have to raise our little finger and ask what they think,” Ferré said. “We will take their frustration as a sign of their attachment to the award.”

If the virus impacts next season the same way, however, the award will be awarded.

“It would be less of a problem in terms of fairness, because this time around we’ve had two parts to the season: normal and not normal,” Ferré said. “Imagine that in 2021 all matches are played behind closed doors (without fans) and with five subs. We would adapt, because it would be comparable.”

To fill this year’s gap, the magazine created another trophy: the France Football Dream Team.

The magazine’s jury of 180 will elect history’s best team from a shortlist of five players in each position. The star-studded lineup will be known sometime in autumn.

Ronaldo will not be able to equal Messi this year, but he could find himself in the same team for the first time.