Baltimore talks about hosting Blue Jays; how about Hartford? 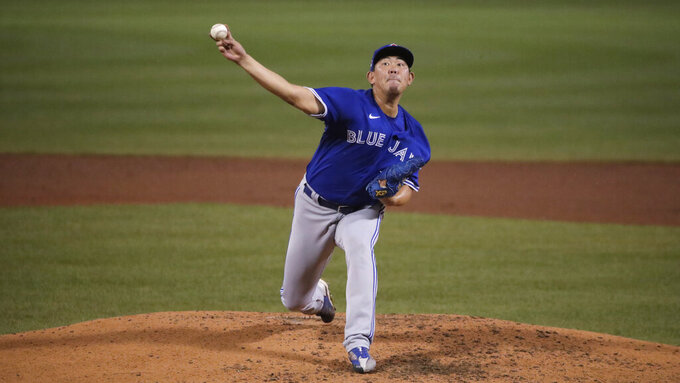 TORONTO (AP) — The Baltimore Orioles and the state of Maryland have had talks about the team sharing Oriole Park at Camden Yards with the displaced Toronto Blue Jays amid the coronavirus pandemic.

The Blue Jays are looking for a major league park after the Canadian government declined to allow them to play in Toronto, and the state of Pennsylvania nixed a deal to play in Pittsburgh because of frequent travel throughout the United States.

The governor of Connecticut is pitching, too, to have the Blue Jays play at the Double-A ballpark in Hartford.

Toronto begins the season at Tampa Bay on Friday. The Blue Jays are scheduled to play their first home game July 29 against the defending champion Washington Nationals.

Maryland Gov. Larry Hogan acknowledged in an interview with The Associated Press there have been talks about the state hosting the Blue Jays.

“We’ve had some discussions with the Orioles. I don’t know the final details of that. Obviously, we’re watching our numbers very carefully everyday. We’re concerned about the spikes in other states. I know major league baseball is also taking a look at it day to day,” Hogan told the AP.

“We’re not ready to put fans in the stands, but if you have, you know, a couple of guys standing in the field with masks on pretty far distanced from each other, and they can figure out a way to do it safely, maybe it can happen.”

Michael Ricci, a spokesman for Hogan, said discussions are still happening “but we don’t have any announcement to make right now just yet.”

“Maryland Stadium Authority is talking to the Orioles about it, so that’s where the discussions currently are on the state level, and then I think once they’ve kind of come to an agreement on something they’ll bring it to the governor and the health department,” Ricci told the AP.

A source familiar with the matter told the AP the Orioles are engaged in talks with the Blue Jays about playing “home games” at Oriole Park at Camden Yards. The official said the Orioles are trying to help Toronto however they can but says there are lots of logistics to be worked through yet in terms of feasibility. The official said the Blue Jays would build a makeshift clubhouse in the stadium concourse in one scenario.

The official, who spoke on condition of anonymity because they were not authorized to speak publicly on the matter, said the Blue Jays are working on other contingencies, too.

The Blue Jays may find it hard to get clearance to play in Baltimore as COVID-19 cases doubled in the city in the past month. Masks will be mandatory in indoor public spaces starting Friday and Mayor Bernard Young announced a halt to indoor dining, about a month after allowing restaurants to half full.

Dr. Rachel Levine, Pennsylvania’s secretary of health, noted a significant increase in the number of cases in southwestern Pennsylvania and the risk of adding travelers to the region as the reason to decline the Blue Jays’ request to play in Pittsburgh. The Blue Jays and the Pirates had an agreement to for the team to play at PNC Park pending state approval.

But the number of new confirmed cases of the coronavirus reported daily by Allegheny County — which includes Pittsburgh and 1.2 million residents — has increased tenfold in the last two weeks and the state rejected the plan.

Atkins said earlier this week if the Blue Jays can’t find a major league park, their Triple-A affiliate in Buffalo, New York, would be their most likely site for home games. But it lacks major league caliber facilities and based on what the players want and the collaboration they are getting from other teams and MLB, Atkins said the Blue Jays are focused on major league parks, as long as they can be safe. He said health and safety is the priority, so the ability to be socially distant without comprising other teams’ ability to maintain social distance is important.

If a major league stadium can’t be found, the Blue Jays could be facing a 60-game road trip, playing opposing teams in their own ballparks instead of a home park.

Meanwhile, Connecticut Gov. Ned Lamont is making a personal push to have the Blue Jays use Dunkin’ Donuts Park in downtown Hartford, a $56 million, 6,121-seat minor league park that opened in 2017. The facility is home to the Double-A Eastern League Hartford Yard Goats, but their season has been canceled because of the pandemic.

Lamont, a former businessman, first reached out to the team about two weeks ago. The Democrat has had at least two discussions with the team, including a half-hour call on Thursday with CEO Mark Shapiro, when he pitched the fact that Connecticut currently has one of the lowest COVID-19 infection rates in the country, said his spokesman, Max Reiss.

"They have indoor batting cages. They have hitting bays. They have a large clubhouse for players. You know, it’s a top-flight facility. And, you know, we if there’s a way to make this happen, we would absolutely love to. But at the end of the day, it’s the decision of the Toronto Blue Jays,” Reiss said.

Witte reported from Annapolis, Maryland. Susan Haigh in Hartford contributed to this report.