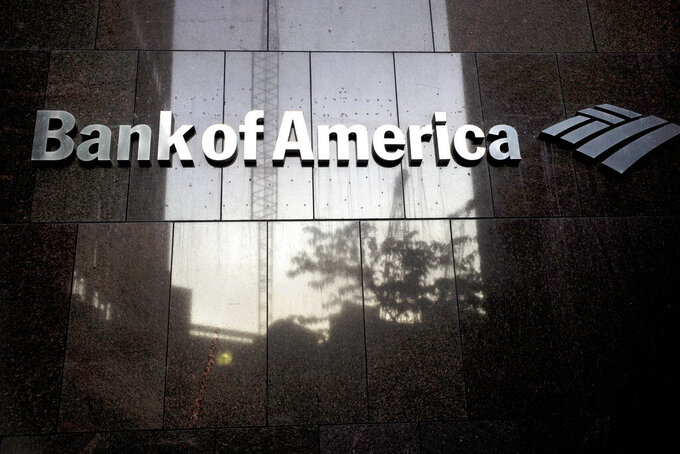 FILE - In this Monday, Oct. 14, 2019 file photo a Bank of America logo is attached to the exterior of the Bank of America Financial Center building, in Boston. Consumer banking giant Bank of America saw its profits drop by more than half in the second quarter, the bank reported Thursday, July 16, 2020, as the bank set aside billions of dollars to cover potentially bad loans caused by the pandemic. (AP Photo/Steven Senne, File)

NEW YORK (AP) — Bank of America's second-quarter profits were sawed in half and the consumer banking giant set aside billions of dollars to cover potentially bad loans caused by the coronavirus pandemic.

Earnings from the nation's biggest banks are painting a picture of American families and businesses struggling to pay bills with swaths of the nation's economy shut down. While consumers have been able to withstand the brunt of the downturn due to the government's economic stimulus efforts, banks are now bracing for a long, protracted recession that could last well into 2022.

Combined, the five big Wall Street banks that have reported quarterly results set side more than $30 billion in the second quarter to cover loans that may be unrecoverable. Those provisions come on top of the tens of billions they set aside in the first quarter when the pandemic first began to bloom.

Further, millions of credit, auto and mortgage accounts are now on some sort of credit deferral or forbearance program, all loans that would be in some stage of default or collections if these programs weren't in place.

Bank of America Corp. reported a quarterly profit of $3.53 billion, or 37 cents a share, down from $7.34 billion, or 74 cents a share, in the same period a year ago. Wall Street had actually expected worse, but shares still fell 3% in afternoon trading.

Because it is so consumer-focused, BofA is feeling the effects of the coronavirus pandemic more acutely than its rivals. During the quarter, the bank processed 1.8 million requests for payment deferrals on credit cards, mortgages and auto loans, of which 1.7 million are still in place as of last week. BofA put aside $4 billion for credit losses, still less than most competitors.

The bank also revised down its outlook for the U.S. economy, following similar actions by other banks this week. At the start of the pandemic, many economists and bankers expected a sharp “V”-shaped recovery as businesses that shut down began to reopen.

But a resurgence of infections in heavily populated states like California, Florida, Texas and elsewhere have slowed, stopped or reversed the reopening of economies nationwide.

Consumers have been able to withstand the recession in the first few months, due to the extra unemployment benefits and individual stimulus payments. The bank noted that its charge-offs and write-downs would be significantly higher in a typical environment where unemployment stood at 11%.

But those benefits are now running out and Bank of America executives were not optimistic on the country’s economic fortunes. The Charlotte, North Carolina-based bank told investors that it is now revising its balance sheet to withstand recessionary effects well into 2022, far further out than what BofA and other banks forecast only three months ago.

BofA now expects deferrals for consumers to remain at least into the rest of the year.

“Based on projections now, extending the length of the recessionary environment into 2022, deep into 2022, we provide substantial additional reserves for effected future credit losses this quarter,” said BofA CEO Brian Moynihan, on a call with investors.