Bank of England warns of rising inflation, but rates held 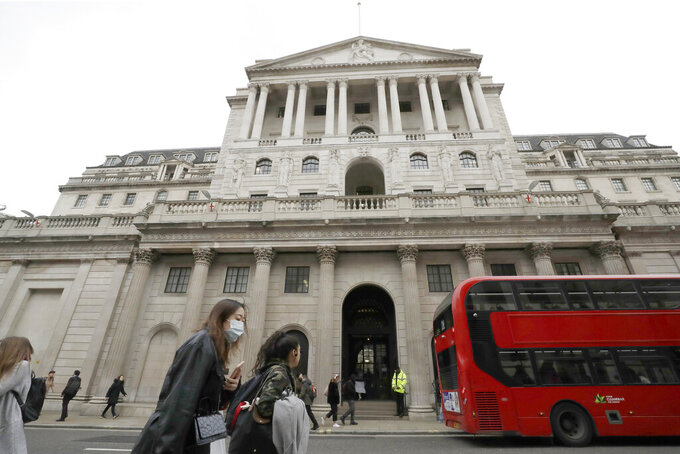 LONDON (AP) — The Bank of England kept its main interest rate at the record low of 0.1% on Thursday even though it warned that inflation pressures are rising as the British economy bounces back following the lifting of many coronavirus lockdown restrictions.

The committee also kept its stimulus program unchanged, though one member — chief economist Andy Haldane at his last meeting before becoming the chief executive of the Royal Academy of Arts — voted to reduce the scale of support given the improving economic outlook, and rising cost and price pressures.

Both decisions had been widely anticipated in financial markets.

The committee sounded a relatively upbeat tone about the British economy but offered few hints about when it will begin withdrawing some of its stimulus or increasing borrowing rates.

It said the recovery has been most pronounced in the consumer-facing services, such as retail and hospitality, for which restrictions were loosened in April.

The recovery has been stronger than the bank anticipated, and as a result it raised its second-quarter growth forecasts for the British economy by around 1.5 percentage points. It now believes output in June will only be about 2.5% below the fourth quarter of 2019, just before the pandemic triggered a recession.

The U.K. experienced one of the world’s deepest recessions last year as three successive lockdowns hobbled the economy.

Restrictions across the U.K. have been lifted over recent months following a monthlong winter lockdown and the rapid rollout of vaccines. Much of the British economy, which shrank around 10% in 2020, has reopened though an array of social distancing restrictions remain in place.

However, the most recent easing due to begin this week was delayed by a month because of a resurgence in the virus, this one the more contagious delta variant. Now, the British government hopes to lift all remaining restrictions on social contact on July 19. The other nations of the U.K. — Scotland, Wales and Northern Ireland — have been broadly coming out of lockdown in the same way as England.

The committee said the “direct economic implications" of the delay were "likely to be relatively small compared with the impact of the re-openings of retail and hospitality activities that had already occurred.”

The committee also appeared to take a fairly sanguine view on the recent spike in inflation. Like others, the U.K. has seen price pressures increase in recent months as the global economy rebounds.

Inflation in the U.K. rose in the year to May to 2.1%, above the bank's target of 2%. The committee said it could exceed 3% for a temporary period but that the direct impact of rises in commodity prices “will be transitory.”

It said it “does not intend to tighten monetary policy at least until there is clear evidence that significant progress is being made in eliminating spare capacity and achieving the 2% inflation target sustainably.”

Economists said talk of a tightening in policy may grow louder this year if the pandemic has clearly come under control and inflation is running above the bank's target.