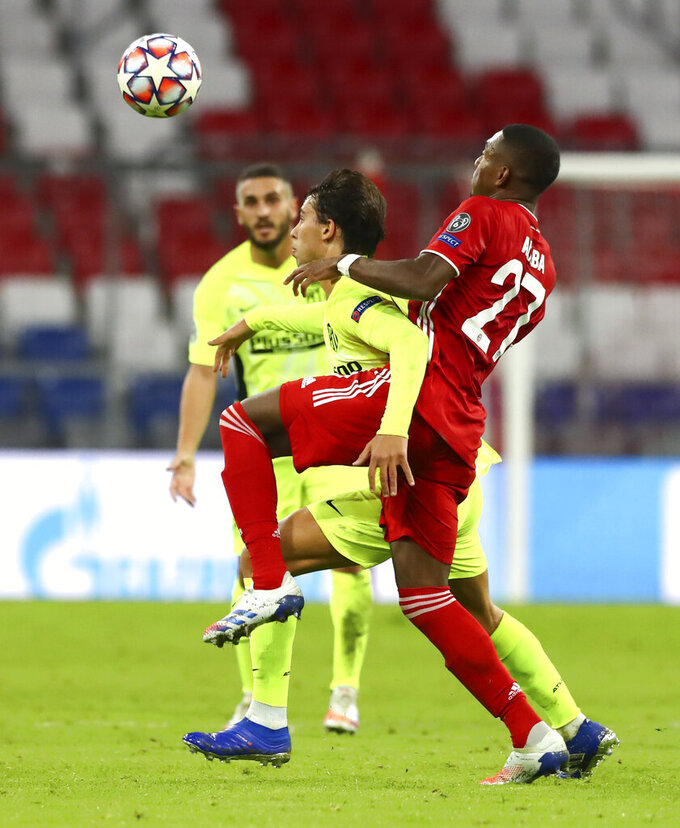 MUNICH (AP) — Bayern Munich picked up where it left off in the Champions League, starting its title defense with a 4-0 rout of Atlético Madrid on Wednesday after overcoming the club's first coronavirus case.

The buildup was overshadowed by Serge Gnabry testing positive for the coronavirus on Tuesday after he had taken part in the team’s final training session for the game. Local health authorities gave the go-ahead for the match to proceed as planned after Gnabry’s teammates tested negative in further tests conducted early Wednesday.

No fans were allowed as per restrictions previously announced due to rising infections in the Bavarian capital.

The home side gradually settled and Niklas Süle struck the post in the 15th minute, before Bayern broke the deadlock in the 28th thanks to good work from Joshua Kimmich in his first game since becoming a father for the second time. The Bayern No. 6 slid in to win the ball back from an attempted clearance and crossed diagonally for Coman to convert at the far post.

Coman laid the ball back for Goretzka to score Bayern’s second in the 41st.

Atlético emerged strongly after the break but João Félix’s goal was ruled out as Suárez was offside and blocking Manuel Neuer’s view on an otherwise quiet night for the Bayern goalkeeper.

The home side resumed control relatively quickly. Thomas Müller almost set up Robert Lewandowski, before Tolisso hammered the ball into the top right corner from around 25 meters (yards) in the 66th.

Coman capped his performance with a fine individual effort on a counterattack in the 72nd, turning Brazilian defender Felipe first one way, then the other, before dinking the ball over goalkeeper Jan Oblak.

Salzburg drew with visiting Lokomotiv Moscow 2-2 in the other group A game.