Beach volleyball to send off 4-time Olympian Gibb in Chicago 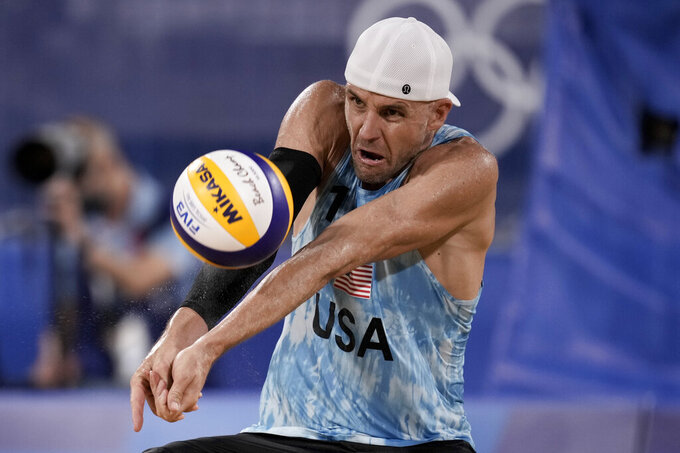 FILE - In this Aug. 2, 2021, file photo, Jacob Gibb, of the United States, returns a shot against Germany during a men's beach volleyball match at the 2020 Summer Olympics in Tokyo, Japan. The Chicago stop of the AVP beach volleyball tour is turning into a farewell for four-time Olympian Gibb. Gibb says that the Chicago Open on Lake Michigan’s Oak Street Beach this weekend will be the last domestic stop for him. (AP Photo/Felipe Dana, File)

The Chicago stop of the AVP beach volleyball tour is turning into a farewell for four-time Olympian Jake Gibb.

Gibb said the Chicago Open on Lake Michigan’s Oak Street Beach this weekend will be the last domestic stop in a two-decade career that included trips to the Summer Games in Beijing, London, Rio de Janeiro and Tokyo. The tour is planning a video and other tributes on the final day, and the 45-year-old Utah native said he will have as many as 30 friends and relatives there to send him off.

“I’m done,” said Gibb, who announced at the Olympics that he was stepping away from international competition and said this week in an interview with The Associated Press that he will retire from the AVP tour as well.

“For the last 10 years, I felt like it was my final year every year. I kept pushing every year, and then one more (Olympic) quad,” he said, adding that the FIVB World Tour finals in Italy in October will be his final international event. “I just feel done. I’m excited to move on.”

A two-time cancer survivor who won 43 times in the U.S. and internationally, Gibb said he hadn’t taken any time to look back over his career since a whirlwind experience in Tokyo in which partner Taylor Crabb tested positive for COVID-19 and was replaced by Tri Bourne.

“Right now, I’m just moving on from the disaster that was the Tokyo Olympics for our team. I just want to move on,” said Gibb, who spent much of his time in Japan in modified quarantine as a close contact with Crabb.

“I was just devastated to not play with Taylor,” said Gibb, who had never played with Bourne before he belatedly flew to Japan to replace Crabb. “He’s the best player in the U.S. right now, and to not get a chance to play with him was devastating.”

Gibb said he plans to open a beach volleyball club for juniors — including his 10-year-old son, Crosby — in his hometown of Huntington Beach, California. He tried youth coaching during the pandemic shutdown of the professional tours and it felt like it was a good test.

“I feel like I’m pretty good at it. I need to get better, but I really enjoyed it,” he said. “I want to make great players better. Hopefully, I’ll be coaching them to get college scholarships and sending them on their way.”

By taking the sand in Tokyo, Gibb became the oldest beach or indoor volleyball player in Olympic history. With fellow four-time Olympian — and Beijing gold medalist — Phil Dalhausser also announcing his retirement, the American men are looking for new and younger blood.

“I see a bunch of guys that have an opportunity to step it up and show the world what the U.SA. can do,” Gibb said. “I also see an opportunity for some unknown players to step in and be the top of the U.S. tour. Maybe the guys that are there will take over the reins.”

But he said he isn't sure yet how much he will be watching. For now, he is focused on his finale — and win No. 44.

Gibb said he usually has between zero and a few fans at an event unless it’s near his Southern California home. For Chicago, about 16 high school friends are coming to watch, along with family members who are making the trip.

“I’m going to have a big crew just celebrating one last tournament,” he said. “And I want to win it."