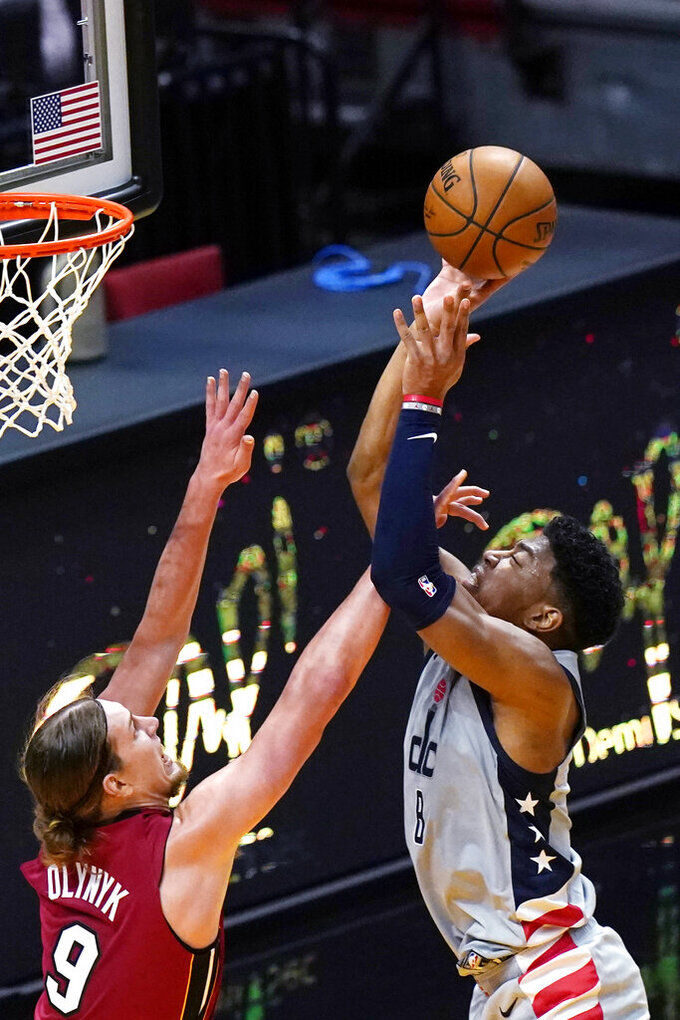 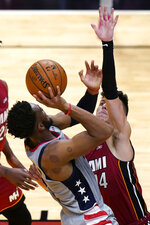 MIAMI (AP) — Say this much for the Washington Wizards: They’re resilient.

And the Miami Heat haven't been.

Bradley Beal scored 32 points and the Wizards rallied from a 13-point, second-half deficit to beat the freefalling Heat 103-100 on Wednesday night.

Deni Avdija added 13 for Washington, which pulled off this comeback just three nights after digging its way out of an 18-point hole to beat the Brooklyn Nets. The Wizards — who had their season suspended for nearly two weeks because of virus issues in January — held Miami to 32 points in the game’s final 23 minutes.

“We've gone through a lot. ... We fought and we kept fighting," Wizards coach Scott Brooks said. “And that's what we're going to do. We're not happy with our win total. We're going to keep competing."

Rui Hachimura and Davis Bertans each scored 11 for Washington (5-13). The Wizards got to their hotel around 4 a.m. Wednesday, then woke up less than five hours later for their first COVID-19 test of the day and still had enough energy to win.

“It's encouraging to win the game with defense," Bertans said.

Tyler Herro scored 20 points for Miami, which fell to 7-14 after making the NBA Finals last season. Jimmy Butler had 19 and Bam Adebayo scored 17.

“There's some points in the game that you can't even explain," Heat coach Erik Spoelstra said. “Look, everybody's disappointed. Everybody's uncomfortable. We all — staff and player alike — we want to be better than what we've shown."

Beal has scored at least 25 points in all of his 17 games this season, the fifth player to start a season on such a streak and the first since Rick Barry did it in 25 straight to begin the 1966-67 campaign. The Wizards were without Russell Westbrook, who has yet to play the second game in a back-to-back this season.

Miami led by 10 at the half, just the third double-digit intermission lead for the Heat this season. They turned the other two into blowout wins.

Not this one, even against a Wizards team that came into the night allowing an NBA-worst 121 points per game.

It was 68-55 when Herro opened the third quarter with a 3-pointer, and then not much of anything went right the rest of the way for the Eastern Conference champions. They missed 11 consecutive shots in the third quarter, then went 0 for 4 on shots to tie or take the lead in the final 56 seconds.

“We just have to be better," Spoelstra said. “It's as simple as that."

Wizards: It was only 50 degrees in Miami when the Wizards landed early Wednesday, the coolest temperature greeting a team arriving to play the Heat since January 2019. ... The two highest-scoring games of Garrison Mathews’ career have both been against Miami, a 28-pointer in December 2019 and a 22-pointer last month. He was held to eight on Wednesday.

Heat: Miami went on a 13-0 first-quarter run, the team’s third-longest consecutive point streak of the season. ... Avery Bradley left in the second half with a strained right calf. ... Herro made his first four 3-point attempts, then missed his last five, including a try as time expired.

Beal’s 15th point on Wednesday gave him 12,000 for his Washington career. He became the second player to score that many for the franchise, joining only Elvin Hayes (15,551). Beal is also the 21st player in NBA history with 40 consecutive games of at least 20 points.

Heat center Meyers Leonard had season-ending stabilization surgery Tuesday on his left shoulder. He appeared in only three games this season. “If anybody can handle it mentally, emotionally and stay positive, that’s Meyers. ... I love the guy,” Spoelstra said.