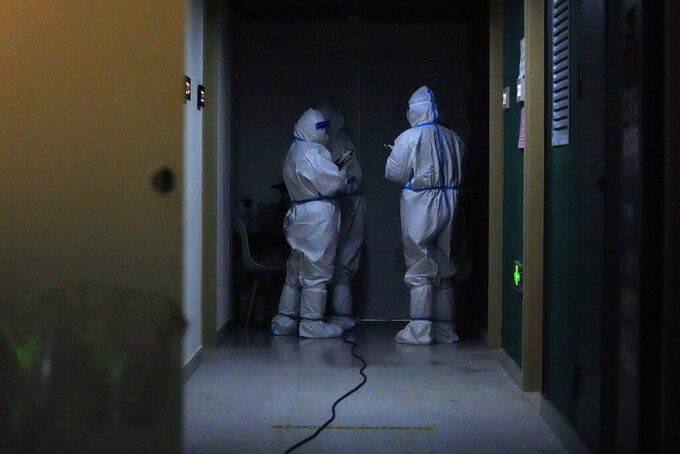 FILE - Olympic workers in protective clothing stand together at a hotel inside the Olympic bubble during the 2022 Winter Olympics, Saturday, Feb. 12, 2022, in Zhangjiakou, China. (AP Photo/Frank Augstein, File)

BEIJING (AP) — At a hotel in Beijing’s Olympic Park, two signs compete for attention, draped across a fence against a deep blue backdrop. “Together for a shared future,” says one, trumpeting the 2022 Winter Games' official slogan. Directly to its left, in big white letters, another warns: “Closed loop area. Don’t cross the line.”

Visitors may find this ironic — hypocritical, even. It's not. For Beijing, the capital of a nation where the characters for “city” and “wall” can overlap, it has become part of the DNA.

It's the latest incarnation of something that has typified the Chinese capital for centuries, since the days emperors occupied the Forbidden City: At its core, Beijing is a compartmentalized metropolis of tiny gated, fenced and subdivided ecosystems that developed both organically and by design — but that made this town strangely appropriate as the site of a locked-down, tightly regulated, bubbled-in COVID Olympics.

Beijing, which can still feel like a smaller town in places, has lived out a modular existence for a long, long time. “The whole interior of the city is laid out in squares like a chessboard with such masterly precision that no description can do justice to it," wrote a 13th-century visitor from Italy, a man named Marco Polo.

And today, between the outsized architecture of commerce, ideology and Olympics, sits a city still in some ways a chessboard full of odd-sized squares.

Exhibit A, spotted from the in-the-bubble bus: Many of the hotels housing visitors during the Games are compact, fortified compounds, inside fences festooned with Olympic signage and guarded by both staff and a formidable police presence to keep occupants inside the closed-loop “bubble."

Like many urban Chinese hotels, they are intended to function as islands once the gates are shut. In such an ecosystem, you can almost forget that the rest of the city exists — the ideal sensibility for encouraging and enforcing Winter Games COVID protocols.

Everywhere you look in Beijing, you can spy evidence of such compartmentalization. It's an eclectic, economically and politically driven patchwork that tells the story of decades of overplanning and no planning, of chaos and control — of tight, fenced-in spaces that push in around the city's renowned open avenues and squares.

Begin with the ancient hutong — narrow, winding lanes full of courtyard residences called siheyuan whose roots date to the 1200s when informal encampments went up just east of the emperor's Forbidden City during the Mongol-ruled Yuan Dynasty. They grew into an intricate, sometimes hierarchical system around the city.

Though hutongs still dot Beijing today, some of them well preserved, many were demolished in the 21st century's first decade during a construction boom that preceded — and was partially caused by — the first Beijing Olympics in 2008.

The overall sensibility, though — self-contained Lego pieces that snapped into a larger whole, some meticulously controlled and others a bit renegade — runs very deep in the city.

For centuries, Beijing was governed by security concerns, fears of prying eyes and traditional Confucian notions about hierarchy. The city was surrounded by fortified gates and walls to separate itself from the countryside; inside town, things were divided into the outer and inner cities.

Inside the inner city sat the Imperial City, essentially its own community that served the dynastic court. And at the very center was the Forbidden City, sequestered even more, where the most elite interacted with the palace and the emperor himself. A closed-loop bubble, if you will, with access determined by influence rather than credentials and negative PCR tests.

“Every wall, gate, temple, palace, street and courtyard had its specially designated place,” historian Mingzheng Shi writes in “Rebuilding the Chinese Capital: Beijing in the Early 20th Century," a 1998 essay.

Old Beijing long ago gave way to new Beijing. And after more than a century of two governments struggling to impose order onto creeping planning incoherence, it's a very different city. Nevertheless, some key characteristics of today’s Chinese capital — built and accrued over seven decades of Communist Party rule and, more recently, assertive capitalism — echo the old.

The layout of modern Beijing — arranged since the 1980s around a series of “ring roads” that segment it and control ingress and egress — functions as an unspoken callback to the old city's walls, to which the innermost ring corresponds. This approach continues; Seventh Ring Road, on Beijing's far outskirts and connecting it with other cities, opened less than four years ago.

Even as Beijing became a modern metropolis, compartmentalization and control stayed front and center, always competing with chaos. Main roads are crowded with various apparatus to prevent people from crossing where they're not supposed to; thanks to fences that look innocuous but are highly effective, jaywalking is not only illegal but operationally implausible.

In Beijing, even vast spaces that give the appearance of utter openness — parts of Olympic Park, for instance, and the iconic and politically sensitive Tiananmen Square — are equipped with features that carefully control entrance and exit. Beijingers remain accustomed to sudden rerouting based on strange fences, walls or even buildings that appear unexpectedly. Sometimes it's the government behind this stuff, sometimes not.

And some of the organizational sensibility of the “work unit," ubiquitous in Chinese society from the 1950s through the 1980s, remains, too — the notion of the workplace as a walled-off mini-community with its own ecosystem, sometimes complete with residences, medical clinics and distinctive rules.

Cap it off with the official Chinese position about Hong Kong, the “special administrative region” it got back from colonizer Britain in 1997 and is obligated on paper to treat differently than the rest of the country until 2047.

In China, that governing principle is called “one country, two systems” — a segmented approach to governing that echoes across the Beijing Olympics, where this month's juxtaposition of citizens outside the bubble with those within feels decidedly like one city, two systems.

Beijing's city walls belong to yesterday; only fragments of them remain. But for the capital of a country that built a Great Wall to keep invading outsiders on the other side, the Olympics offer a chance to dust off the chessboard-squares approach that has been part of the city since its earliest days.

Osvald Sirén, a Swedish art historian and author of “The Walls and Gates of Peking," said this about the capital in 1924: “The life of the whole city becomes concentrated at the gates; everything that goes out of or in to it must pass these narrow openings.”

That's an apt characterization of the Beijing of centuries past. It also describes, perfectly, a swath of the city right now — pandemic Olympic Beijing, circa February 2022, a place of narrow openings, pledging to bring people together for a shared future but making sure, at every closed-loop juncture, that the wrong people don't cross the line.

Ted Anthony, director of new storytelling and newsroom innovation for The Associated Press, is the AP’s former director of Asia-Pacific news and covering his seventh Olympics. He lived in Beijing as a child in 1979-80 and as a journalist from 2001-2004. Follow him on Twitter at http://twitter.com/anthonyted