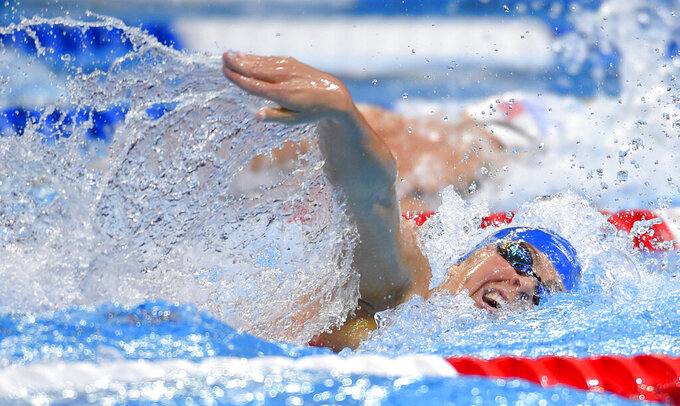 FILE - In this June 28, 2016 file photo, Elizabeth Beisel competes in the women's 200-meter freestyle preliminaries at the U.S. Olympic swimming trials in Omaha, Neb. Beisel competed in three Olympics, but she's never taken on a challenge quite like this. Honoring her late father and raising money for cancer research, she's planning to swim more than 12 miles through cold ocean waters to a popular vacation island off the Rhode Island coast. (AP Photo/Mark J. Terrill, File) 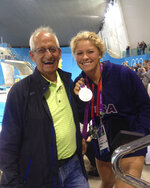 Beisel, who competed in three Olympics and won silver and bronze medals at the 2012 London Games, reached the northern tip of the popular vacation spot in just under 5 1/2 hours.

It was easily longer than any swim in the 29-year-old's competitive career in the pool. Beisel has never taken part in an open-water race, but she followed marathon swimming rules which required her to cover the entire distance without stopping to rest or receiving any assistance from her support boats.

“I just wish my dad was here, honestly. I know that he’s here in spirit," Beisel told The Providence Journal. "Everybody who has fought cancer and who’s beat cancer, this is for them.”

Beisel decided to start training for the long swim after her father, Ted, was diagnosed with pancreatic cancer late last year. He died July 1.

Her mother, Joan, was waiting with a towel and a hug when she emerged from the water at Block Island.

As a native of Rhode Island, she picked the island as her goal, saying it was one of her family's favorite places to visit when she was growing up. Beisel was further inspired to complete a route that had been done previously by two men, but never a woman.

Beisel has raised some $133,000 for cancer research through her partnership with Swim Across America.

Beisel had planned to hit the Atlantic Ocean on Wednesday, but high winds and choppy seas prompted her to push it back to the weekend.

Conditions were nearly perfect on Saturday, with calm water and partly cloudy skies.

“Hopefully," Beisel said, "everyone who saw me do this today can be inspired to do something they don’t think they can do.”