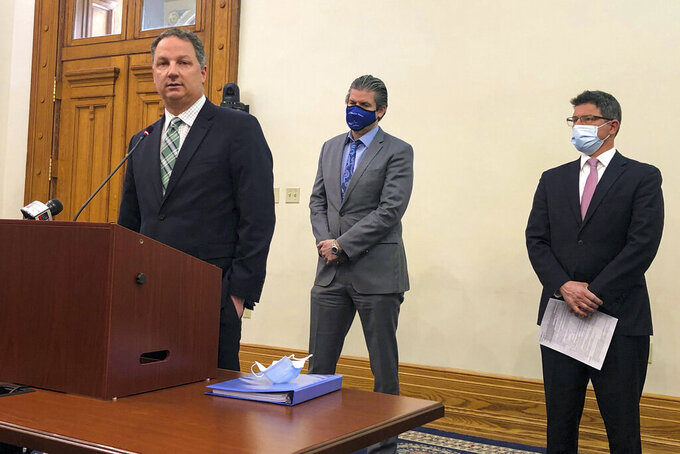 A new state tax revenue forecast given Thursday to state legislators projects those collections going up by more than 4% in each of the next two years. That could mean about $2 billion more available for the new two-year state budget being completed by legislative negotiators after the last forecast in December projected growth between 2% and 3%.

Republican legislative leaders said they will look to direct more money toward K-12 funding and other state programs but that they would be wary of increasing the state’s budget.

“We’re excited about these numbers,” House Speaker Todd Huston said. “We also recognize we need to be very prudent and cautious.”

The latest budget proposal endorsed by the Senate this week would increase overall school funding by 1.2% the first year and about 3% the second year, slightly more than a plan that the House endorsed in February.

Those plans include a contentious expansion of the state’s private school voucher program. Democrats and educators have criticized the budget plans for doing little to directly boost teacher pay or take up recommendations from the teacher pay commission appointed by Republican Gov. Eric Holcomb.

The leader of the state’s largest teachers union said the tax revenue forecast makes now “the time to go big on public education” as Indiana continues to see teachers leave their jobs because of low pay and school districts have already dug deep into local budgets to boost those salaries.

“We have to have greater funding from the state, and we now know that we have the dollars to do it,” Indiana State Teachers Association President Keith Gambill said.

The governor’s commission found it could cost more than $600 million a year to increase Indiana’s average teacher salary ranking from ninth-highest to third-highest in the Midwest.

Huston and Senate President Pro Tem Rodric Bray both said an additional school funding boost was possible as negotiators work toward a planned final budget version next week, along with other priorities such as early pay offs for state debts and more money toward one-time spending initiatives such as a regional economic development program and broadband internet expansion.

“We have confidence that if we put more dollars towards K-12 … it will get in the hands of teachers,” Huston said. “We will be very focused on that issue in the coming days.”

The Indiana School Boards Association has organized opposition from more than half of the state’s nearly 300 local school boards against any expansion of the private school voucher program, arguing that would siphon money away from traditional public schools that educate about 90% of Indiana children.

“Here’s a golden opportunity to significantly improve K-12 public education funding in our state,” said Terry Spradlin, the school boards association’s executive director. “Lawmakers have a real chance to improve the state’s standing on per-pupil funding, which in turn would allow our local schools to make major improvements in teacher compensation.”

Republicans said the revenue projections were welcome news compared to the COVID-19 pandemic’s early days a year ago when tax collections were expected to plunge and the governor ordered 15% spending cuts by most state agencies.

House Ways and Means Committee Chairman Tim Brown, a Crawfordsville Republican, called the projections “amazing and exciting” and said he expected many requests for more money in the coming days.