'A better time than any': Finding joy in music lessons, jams 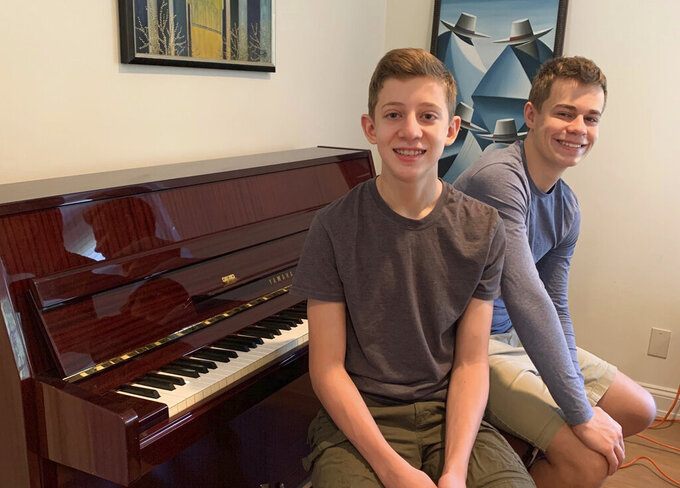 This Nov. 20, 2020 photo released by Andrea Fage shows brothers Rafael Fage, 16, background, ad Noah Fage, 14 posing at the piano at their home in Harrison, N.Y. During the pandemic lockdown, private piano lessons for boys stopped. They researched movie soundtracks and learned the score on their own with the assistance of sites like YouTube. (Andrea Fage via AP) 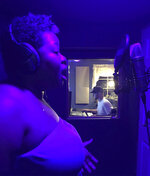 These weren’t the piano lessons of my youth. Quite the opposite.

Gone was the septuagenarian teacher crowding me on a piano bench at my grandmother’s house, extolling the importance of Christian hymns. “Old Rugged Cross,” “Jesus Loves Me,” “How Great Thou Art." Grandma finally accepted my resignation after a few solid years of protest.

Then last spring, as the pandemic droned on, I’d lost my job, and our schools in the Boston area remained closed, I decided to start taking piano lessons again.

It had been 30 years. The grand staff was a foreign language and the only key I could recognize was middle C.

The first day, I propped up my phone, clicked a Zoom link for our lesson and found an energetic college student staring back at me.

I’d been thinking about returning to piano for a while, but never had the free time required for learning a skill until the shutdown in March. It was rainy and frigid in New England, and I needed an antidote for the monotony of pandemic life. Some were tending sourdough starters, others binge-watched Netflix. I started piano lessons.

I wasn’t the only one who chose music.

“I knew nothing about the ukulele community before COVID,” said Pat Adamson-Waitley, 64, of Edina, Minnesota.

Adamson-Waitley had played the ukulele a handful of times, but in March, she said, “I started playing it every day.”

She joined Zoom jams with other players, and bought two ukuleles and two songbooks. Summer's warm weather took her away from the ukulele a little, but she still averages 30 minutes of playing time a day.

Clubs like the Twin Cities ukulele club, an informal group of about 300 people, have welcomed many people discovering music for the first time, or finding it again. Tom Ehlinger, 69, of Bloomington, Minnesota, leads the club’s weekly Zoom jams.

“One thing that’s different about the Zoom jam is that it’s much easier to get to than an in-person jam,” he said. “There’s no traffic.”

Since March, Ehlinger has received inquiries from people as far away as New York City wanting to join.

“It brings people together solely for the purpose of doing something enjoyable,” he said.

The cost of online lessons is lower than in-person instruction, Geant noted. And if the student and teacher don’t match well, it’s easy to find a new instructor.

“Online, you can find the right instructor because you’re no longer bound by geography,” he said.

Rashida Bryant, 44, is an Atlanta-based voice instructor through Wyzant who saw her client roster double from April to June, when she had 30 students.

Her students range in age from early teenagers to people in their late 60s.

“Everybody has different reasons for doing it, but if you’re going to be at home, then this is a better time than any,” she said.

A SENSE OF CONTROL

Turning to music during bleak times has a long history, said Joy Allen, chair of Music Therapy at Berklee College of Music in Boston.

“It gives us choice and control, and we don’t have a lot of that right now,” she said.

Music also provides social connection, Allen said, and a link to the familiar.

During lockdown, private piano lessons for Andrea Cordero Fage’s two teenage sons in Harrison, New York, stopped, but something new happened. The brothers, whose interest in music has waxed and waned over the years, “came into their own musically,” she said. “I would have never imagined it.”

They started playing piano for hours a day. They researched movie soundtracks, like the one to the 2014 science fiction epic “Interstellar,” by Hans Zimmer, and learned the score on their own with the assistance of sites like YouTube.

“After dinner, one would play and the other would watch. Then they’d switch,” Cordero Fage said. “I think they fed off each other, saw it as a challenge.”

Studying or listening to music can harness our focus, said Melita Belgrave, associate dean and professor of music therapy at Arizona State University.

Throughout the pandemic, many people have been watching concerts at home but retaining a semblance of the shared experience. The millions of people who streamed the movie version of the Broadway musical “Hamilton” is an example.

“People are finding themselves drawn to the arts and crafts,” Belgrave said. “We are learning new ways to connect with each other.”

I haven’t figured out whether my Zoom piano lessons will continue past the pandemic. I've gone from knowing middle C to playing cusp chords, eight-key scales and Mozart.

But even if returning to regular life interrupts my lessons, piano will always be one of my best pandemic memories.