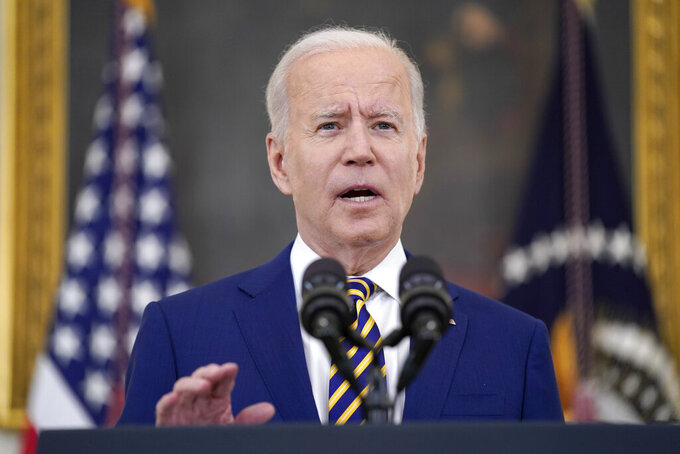 WASHINGTON (AP) — President Joe Biden is expected to fall short of his commitment to shipping 80 million COVID-19 vaccine doses abroad by the end of June because of regulatory and other hurdles, officials said as they announced new plans Monday for sharing the shots globally.

Officials said that while the U.S.-produced doses are ready, deliveries have been delayed due to U.S. and the recipient countries' legal, logistical and regulatory requirements.

“What we’ve found to be the biggest challenge is not actually the supply — we have plenty of doses to share with the world — but this is a Herculean logistical challenge," said White House press secretary Jen Psaki.

Psaki said shipments will go out as soon as countries are ready to receive the doses and the administration sorts out logistical complexities, including vaccination supplies like syringes and alcohol prep pads, cold-storage for the doses, customs procedures and even language barriers.

Psaki said she was not aware of how many doses would be shipped by the end of the month.

The excess doses are not needed in the U.S., where demand for vaccinations has plummeted in recent weeks as more than 177 million Americans have received at least one shot.

On May 17, Biden announced that "over the next six weeks, the United States of America will send 80 million doses overseas. This will be more vaccines than any country has actually shared to date — five times more than any other country — more than Russia and China, which have donated 15 million doses.”

Earlier this month, Biden announced that on top of the 80 million, the U.S. was purchasing 500 million doses from Pfizer to donate globally over the coming year, with the first deliveries expected in August.

Biden initially committed to providing other nations with all 60 million U.S.-produced doses of the AstraZeneca vaccine, which has yet to be authorized for use in the U.S. but is widely approved around the world. The AstraZeneca doses have been held up for export by a weekslong safety review by the Food and Drug Administration.

Given declining domestic demand, Biden was expected to be able to meet the full 80 million commitment without the AstraZeneca doses. The White House unveiled plans earlier this month for the first 25 million doses for export from existing federal stockpiles of Pfizer, Moderna and Johnson & Johnson vaccines and some have already begun shipping.

On Monday, it revealed plans for 55 million more shots.