Biden tax proposal in focus at Group of 7 ministers' meeting 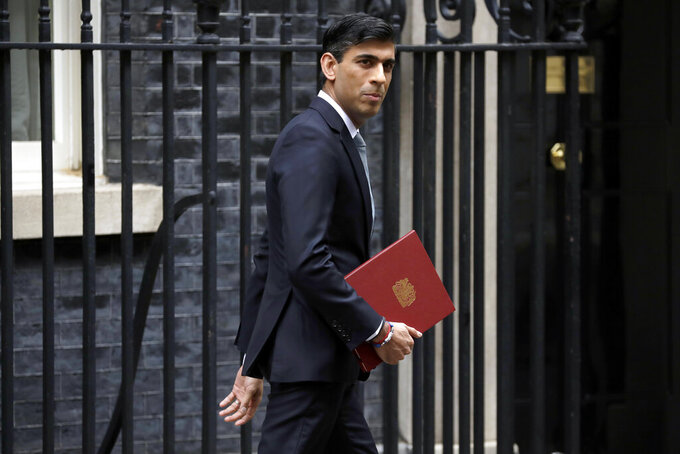 FILE - In this Wednesday, July 8, 2020 file photo, British Chancellor of the Exchequer Rishi Sunak leaves number 11 Downing Street, to deliver a financial announcement to the Houses of Parliament in London. Finance ministers from the Group of Seven wealthy democracies have a lot to talk about when they gather in London starting Friday, June 4, 2021. Ministers at the meeting chaired by Britain's Rishi Sunak and to be attended by U.S. Treasury Secretary Janet Yellen will talk about supporting the post-pandemic economic recovery and work on restoring cooperation among the seven allies after friction during the term of former President Donald Trump. (AP Photo/Matt Dunham, File)

Biden's push for a global minimum corporate tax of at least 15% has unblocked stalled global tax negotiations and raised prospects of an agreement this year, although key aspects such as the actual rate remain to be decided. An endorsement from the G-7 could help build support for a deal in ongoing talks among more than 140 countries being held in Paris.

A broader theme of the meeting Friday and Saturday will be restoring closer cooperation among the seven allies after four years of unilateralism under former U.S. President Donald Trump. His go-it-alone approach and imposition of trade sanctions on allied democracies disrupted the group — even as its members faced increasing challenges from rivals such as China and Russia. Officials will also talk about supporting the post-pandemic economic recovery through government spending, as well as vaccine access and distribution, and efforts to fight climate change.

Britain’s Treasury chief Rishi Sunak is convening the meeting at the Lancaster House mansion in London because Britain currently has the rotating chair of the group. The meeting prepares the way for a June 11-13 summit of G-7 heads of state and government hosted by British Prime Minister Boris Johnson in Carbis Bay, Cornwall.

Biden's push to end what Treasury Secretary Janet Yellen has called a “race to the bottom” by low-tax countries has given new energy to Paris talks convened by the Organization for Economic Cooperation and Development. These had stalled, in part due to an insistence by the Trump administration that multinationals be allowed to opt out of new international tax arrangements.

The tax talks in Paris focus on two pillars: One is a global minimum to prevent multinational companies from using complex legal and accounting schemes to move profits to low-tax countries where they do little or no business. The second is finding a way to tax companies — particularly Internet-based ones — that may reap profits in countries where they have no physical presence and thus pay no tax.

The minimum rate would deter tax avoidance because countries would agree to apply it to their companies’ foreign earnings if those earnings went untaxed overseas.

France has already introduced digital taxes targeting big Internet companies, leading to opposition from the United States to what was seen as a measure unfairly targeting American companies such as Google and Amazon. Biden has suggested an approach that would not single out tech companies. He has proposed letting countries tax a local share of earnings from a list of 100 of the globe's biggest and most profitable companies, whatever their business model. One goal of an international agreement would be getting France and other countries that have followed its lead to withdraw the unilateral digital tax in favor of a unified global approach.

“This is a decisive step before the G-20 in Venice in early July,” he said. "It's close at hand. We owe it to our citizens.”

The Group of 7 is an informal forum among Canada, France, Germany, Italy, Japan, the UK and the United States. European Union representatives also attend. Its decisions are not legally binding, but leaders can use the forum to exert political influence.