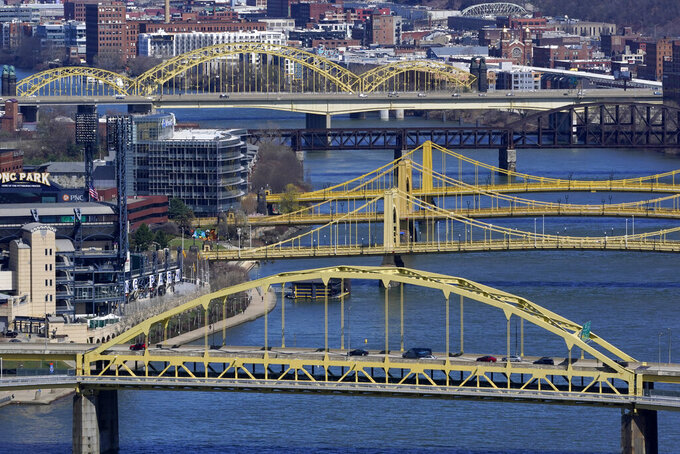 WASHINGTON (AP) — Republicans in Congress are making the politically brazen bet that it’s more advantageous to oppose President Joe Biden’s ambitious “ Rebuild America” agenda than to lend support for the costly $2.3 trillion undertaking for roads, bridges and other infrastructure investments.

Much the way Republicans provided no votes for the $1.9 trillion COVID-19 relief bill, they plan to stay on the sidelines for this next big lift by the White House, forcing Democrats to take full ownership of the massive package of spending and corporate tax hikes that Biden wants approved over the summer. Both sides are digging in this week as Biden shows no signs adjusting to satisfy Republican leaders, instead appealing directly to their constituents.

"They know we need it,” Biden said of the Republicans Monday as he returned to Washington.

The president did not close the door on negotiations but vowed to “push as hard as I can" for the plan. "Everybody around the world is investing billions and billions of dollars in infrastructure, and we’re going to do it here,” he said.

That leaves Biden and congressional Republicans on a collision course, the outcome of which could define the parties and his presidency. The GOP strategy is reminiscent of their Obama-era stance that helped sour voters on the Democratic president and his Congress more than a decade ago. Then and now Republicans are intent on saddling Democrats with responsibility for all the taxes and spending to come, much as they did the 2009 rescue after the economic crisis, framing it as government overreach that piles on debt.

Senate Republican leader Mitch McConnell declared plainly on Monday that Biden's plan is “something we’re not going to do.”

Speaking to reporters in Kentucky, McConnell said Republicans could support a “much more modest” approach, and one that doesn't rely on corporate tax hikes to pay for it.

But it’s not at all certain the GOP playbook that worked more than a decade ago will produce the same political gains this time around. Voters appear tired of the partisan stalemate in Washington. Many live in the country's run-down areas and are signaling they are initially supportive of Biden’s approach to governing, at least on the virus aid package.

Recent polling by The Associated Press-NORC Public Research Center found Americans have responded favorably to the president’s approach, with 73% approving of his handling of the pandemic. That includes about half of Republicans.

Sen. Roy Blunt, R-Mo., a member of Senate GOP leadership, said Sunday a smaller infrastructure package of about $615 billion, or 30% of what Biden is proposing, could find bipartisan backing from Republicans if the White House did way with the new tax and relied on user fees or other ways to pay for the spending.

Under the Biden plan, the corporate tax rate would rise back to 28% — not fully reversing the Trump-era GOP tax cut on big business but settling on a middle ground from what had been a 35% rate before Republicans approved the 2017 tax overhaul. It's now at 21%,

Rather than shy from a new era of bigger government, Democratic leaders in Congress are embracing it, believing they can bypass the GOP blockade on Capitol Hill and make the case directly to Americans hungry for investments in homes, communities and livelihoods, especially as China and other rival countries make advancements.

House Speaker Nancy Pelosi compares Biden’s plan to the far-reaching aims of presidents before him — from Thomas Jefferson’s efforts to build the Erie Canal to Teddy Roosevelt's designs on a national park system.

Progressives want Biden to go even bigger. Sen. Bernie Sanders, I-Vt., said Sunday he expects more funding to combat climate change and is pushing to include his own proposal to expand Medicare with dental, vision and hearing aid care for seniors.

As Congress hunkers down to begin drafting the legislation for Biden's proposal, both parties will be put the test.

In the House, lawmakers will be invited to submit requests for projects in their home districts — roads and other infrastructure that could be “earmarks” eligible for federal funds. It's a way to entice bipartisan participation and ensure the funds are spent on agreed-upon needs.

Republicans will be forced to either participate or disengage, often with pressure from elected officials and other constituents clamoring for funds to upgrade sewers, airports and countless other infrastructure systems.

Peppered with questions as he toured Kentucky about money that could be potentially flowing for home-state road, bridge and housing projects, McConnell has batted them back one by one.

McConnell vowed last week to fight Biden’s agenda “every step of the way.”

Asked about that comment, Biden told reporters Friday, “I think the Republicans’ voters are going to have a lot to say about whether we get a lot of this done."

At the same time, Democrats as well as Republicans will be faced with the politically sticky vote on raising corporate taxes to pay for all the spending, bucking the business community that is largely against Biden's plan to permanently hike the rate corporations pay to 28%.

Both parties view it as an almost existential battle over competing political views: The Democrats who believe in the power of government to take the lead solving the nation's problems; the Republicans who put their faith in the private sector to drive solutions.

On Capitol Hill, it's also a battle over which party will control Congress.

After Barack Obama was elected in 2008, McConnell famously said his goal was to make the Democrat a one-term president. This time around the Republican leader appears to have a shorter-term goal at hand — he wants to win back the now evenly split 50-50 Senate.

“They’re so close to the majority in 2022, they can taste it,” said Alex Conant, a Republican strategist.

Democrats have Senate control because their party’s vice president, Kamala Harris, can cast a tie-breaking vote. In the House, the Democratic majority is holding on by just a handful of seats.

Conant said the Republicans: “They really don’t want to give Biden wins,."

Democrats, uncertain about their political prospects, are legislating as if they are on borrowed time.

Senate Majority Leader Chuck Schumer has set in motion a potential process that would allow Biden's package to advance without the typical 60-vote threshold needed to overcome a filibuster by Republicans. Instead, it could be approved with a simple 51-vote majority.

Pelosi has set a July 4 goal for House votes, but acknowledges that ambitious timeline may slip.