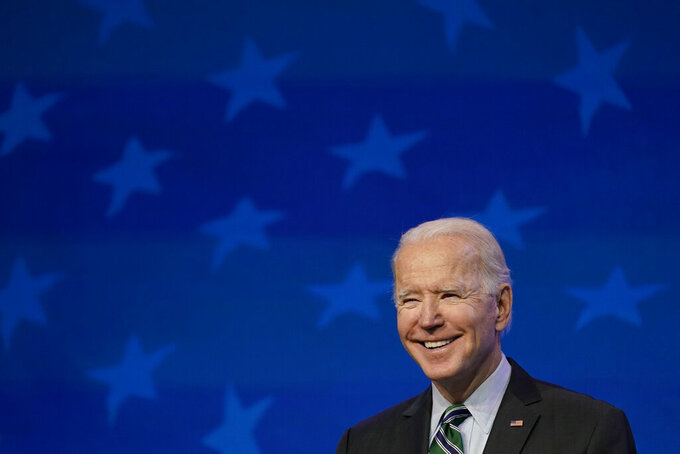 WILMINGTON, Del. (AP) — Joseph Robinette Biden Jr. has navigated a half-century in American politics by relentlessly positioning himself at the core of the Democratic Party.

Wherever that power center shifted, there Biden has been, whether as the young senator who opposed court-ordered busing in school integration cases or the soon-to-be 46th president pitching an agenda on par with Franklin D. Roosevelt’s New Deal and Lyndon B. Johnson’s Great Society.

The common thread through that evolution is Biden always pitching himself as an institutionalist -- a mainstream liberal but also a pragmatist who still insists that governing well depends on compromise and consensus.

On Wednesday, the 78-year-old president-elect will inherit stewardship of a nation wrenched by pandemic, seismic cultural fissures and an opposition party’s base that considers him illegitimate, even to the point of President Donald Trump’s supporters violently attacking the U.S. Capitol on Jan. 6 as Congress convened to certify Biden’s victory.

“A message of unity. A message of getting things done,” Ron Klain, his incoming White House chief of staff, explained Sunday on CNN's “State of the Union.”

The first approach, rooted in Biden’s campaign pledge to “restore the soul of the nation,” netted a record 81 million votes in the election. In his Nov. 7 victory speech, Biden called that coalition “the broadest and most diverse in history” and framed it as evidence Americans are ready to “lower the temperature” and “heal.”

Biden’s second, policy-based approach, however, still must confront a hyperpartisan age and a closely divided Congress.

The outcome will determine the reach of Biden’s presidency and further test the lifetime politician’s ability to evolve and meet events.

“We can’t have a claim to want to heal the nation if what people mean is just having the right tone and being able to pat one another on the back,” said the Rev. William Barber, a leading social justice advocate who has personally pushed Biden to prioritize the marginalized and poor of all races.

“Real healing of the nation,” Barber said, “must be dealing with the sickness in the body of the nation caused by policy, by racism, by polity.”

Activists such as Barber represent just one of many flanks surrounding Biden.

Republicans are clear they won’t passively ratify Biden’s responses to the pandemic or deep-seated problems that came before it: institutional racism, widening wealth gaps, the climate crisis. The Democratic Party isn’t marching in lockstep, either, as progressives, liberals and moderates dicker over details.

Harris framed the stakes Sunday, telling “CBS Sunday Morning” that the Capitol insurrection on Jan. 6 “was an exposure of the vulnerability of our democracy.”

Anzalone loosely compared Biden's appeal to Ronald Reagan's. Reagan was a hero of movement conservatives yet drew support from a wide swath of “Reagan Democrats” to win the presidency in 1980 amid economic and international instability. By extension, Reagan could count on support or at least good faith from many Democrats on Capitol Hill, most notably then-Speaker Tip O’Neill, D-Mass.

“The analogy sort of fails when you ask who are the Tip O’Neills for Republicans at this point?” Anzalone acknowledged. But, he said, Biden “is not averse to big fights.”

Biden projects confidence regardless, in part, those close to him say, because of his long tenure in Washington buttressed now with the presidential megaphone.

“Part of the president’s job is making the case to the American people and persuading them what the right way forward is,” said Stef Feldman, policy director for Biden’s campaign.

Through that lens, it becomes less surprising to see the politician who joined Republicans in the mid-1990s to clamor for a balanced budget now declares emergency spending measured by the trillions “more urgent than ever,” even “including deficit spending.”

It was a similar course for Biden as he aged from a young senator in a chamber still stocked with old-guard segregationists into the trusted lieutenant for the nation’s first Black president. The Senate Judiciary Chairman who in 1991 led an all-male panel in Supreme Court confirmation hearings involving sexual harassment claims turned the widely panned experience into invitations for the committee to seat its first Democratic female members.

The Catholic politician who for decades acknowledged his struggle over abortion policy flouted church teachings as vice president by announcing his support for same-sex marriage before most other elected Democrats, including the ostensibly more socially progressive Obama. And during the 2020 campaign, even as Biden started to the left of Obama and 2016 nominee Hillary Clinton, he inched further leftward on health care, college tuition aid and climate policy.

While Biden aides argue his shifts don’t involve changes in principle or fundamental values, some other observers say the point is moot. The question, said Maurice Mitchell, who leads the progressive Working Families Party, is simply whether Biden will continue to evolve and leverage his political capital into both post-Trump stability and big policy wins.

“We can’t control people’s convictions but we can shift the politics of the possible,” Mitchell said, noting that Johnson signed seminal civil rights laws less than a decade after quashing such measures as Senate majority leader.

Barber, the minister, pointed to other historical figures whom Biden sometimes mentioned while campaigning: Roosevelt and Abraham Lincoln. Both, Barber noted, were savvy, even ruthless politicians who reached for their biggest achievements only after winning the nation’s highest office -- and they did so against vicious opposition and during times of existential national threats.

“There’s good record in our history that there are moments in this country can and has taken great steps forward,” Barber said. “And many times, it was right on the heels of great pain. The movement and the moment can cause leaders -- presidents, senators, congresspeople -- to be much greater than they even intended or imagined.”