Bird, Taurasi say playing in 2020 was only option for them 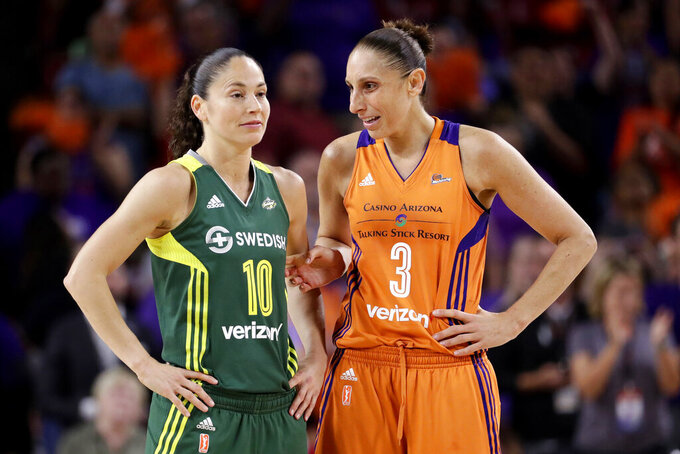 FILE - In this Sept. 6, 2017 file photo, Phoenix Mercury guard Diana Taurasi (3) talks with Seattle Storm guard Sue Bird (10) during the second half of a WNBA basketball playoff game in Tempe, Ariz. Taurasi and Bird know that they are on the tail end of their incredible basketball careers. After both stars missed last season due to injuries, skipping the 2020 season could have meant the end of their illustrious careers because it would have been difficult to return after two years off according to them. (AP Photo/Matt York, File)

Diana Taurasi and Sue Bird know that they are on the tail end of their basketball careers.

After missing last season due to injuries, they had to make a decision about playing this year in a short WNBA season in Florida that was put on hold due to the coronavirus pandemic. But both say skipping the 2020 season could have meant the end of their playing days because it would have been difficult to return after two years off.

“If I didn’t play this season, that could have been it,” Taurasi said in a phone interview Tuesday. “When you’re 38 and pounding away this long, you just don't know.”

The Phoenix Mercury guard played in only six games last season, hampered by back and hamstring injuries.

But Taurasi's teammates say she has looked great on the court.

“Everything she’s been doing in the offseason is paying off,” said Phoenix's Brittney Griner. “She's smart with her body on the court. We are telling her you ain't got nothing to prove. We need you in the games. We need you at the end of the season.”

The 39-year-old Bird — the oldest player in the league — missed last season after surgery on her left knee.

“If I didn’t play basketball this summer, I don’t know, I might have been done. And that’s just a reality,” the Seattle Storm point guard and league's all-time assist leader said in a zoom call last week. “This isn’t me wanting to retire, this isn’t me wanting to stop playing. The last time I played was like February (2020) with USA Basketball, which was only a couple games.

Despite wanting to play, Bird and Taurasi say that they had some reservations about going to the bubble in Florida, but they trusted the WNBA and the effort the league put into keeping the players and staff safe.

“I understood that this is all just one big game of trust,” Bird said. “It’s set up for success, and for us to do well and complete the season. With that, there’s a virus that nobody has any control over. Coming into this experience, I felt comfortable that we were going to be able to trust each other.”

Taurasi had the added burden of leaving her wife, former Phoenix assistant Penny Taylor, and son Leo behind in Arizona when she headed to Florida.

“It was a really hard decision,” Taurasi said. “Florida is still is a hotbed for COVID-19. For the last 3½ months, Penny, Leo and I have been staying at home. We haven't left much. We were taking it seriously. The WNBA has put every parameter in place. It's the people who will make this work. Everyone respects this league enough to stay safe.”

Both players, if healthy, plan on playing next year and competing in the postponed Olympics in Tokyo as they try for an unprecedented fifth gold medal.