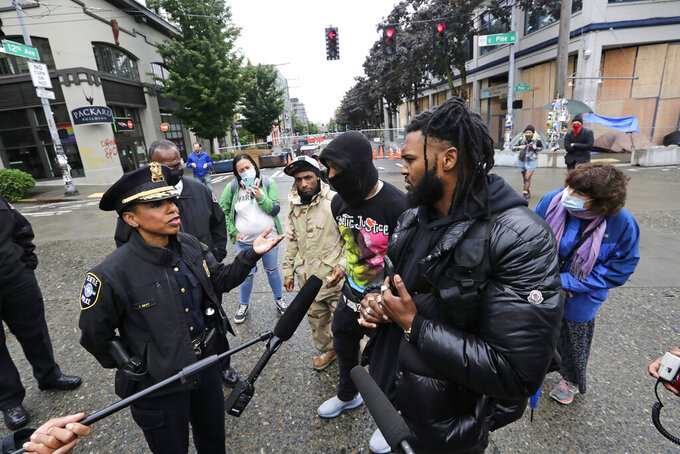 Seattle Police Chief Carmen Best, left, talks with activist Raz Simone, right front, and others near a plywood-covered and closed Seattle police precinct behind them Tuesday, June 9, 2020, in Seattle, following protests over the death of George Floyd, a black man who was in police custody in Minneapolis. Under pressure from city councilors, protesters and dozens of other elected leaders who have demanded that officers dial back their tactics, the police department on Monday removed barricades near its East Precinct building in the Capitol Hill neighborhood, where protesters and riot squads had faced off nightly. Protesters were allowed to march and demonstrate in front of the building, and the night remained peaceful. (AP Photo/Elaine Thompson)

SEATTLE (AP) — A Black Lives Matter group sued the Seattle Police Department Tuesday to halt the violent tactics it has used to break up largely peaceful protests in recent days.

“These daily demonstrations are fueled by people from all over the city who demand that police stop using excessive force against Black people, and they demand that Seattle dismantle its racist systems of oppression," Livio De La Cruz, board member of Black Lives Matter Seattle-King County, said in a written statement. "It is unacceptable that the Seattle Police Department would then respond to these demonstrations with more excessive force, including using tear gas and flashbang grenades.”

Officers have used tear gas, pepper spray and other less-lethal weapons against crowds that have demonstrated against racism and police brutality following the killing of George Floyd in Minneapolis. Seattle Mayor Jenny Durkan and Police Chief Carmen Best have apologized to peaceful protesters who were subjected to chemical weapons, but even after they promised a 30-day ban on using CS gas, one type of tear gas, last Friday, officers used it again two nights later, saying unruly demonstrators were encroaching on their position.

Under pressure from city councilors, protesters and dozens of other elected leaders who have demanded that officers dial back their tactics, the police department on Monday removed barricades near its East Precinct building in the Capitol Hill neighborhood, where protesters and riot squads had faced off nightly. Protesters were allowed to march and demonstrate in front of the building, and the night remained peaceful.

On Tuesday evening with hundreds of people gathered in the rain on Capitol Hill, there was no violence and no officers.

The lawsuit alleged that the use of chemical agents and less-lethal projectiles police violated the Fourth Amendment's protections against excessive force as well as the First Amendment's free speech protections. It also said the use of tear gas and pepper spray was especially reckless during a respiratory pandemic and could increase risks related to COVID-19.

“On an almost nightly basis, the SPD has indiscriminately used excessive force against protesters, legal observers, journalists, and medical personnel,” the lawsuit states.

The police department referred questions about the case to the Seattle City Attorney's Office, which said only that it is reviewing it.

Durkan's office called the lawsuit “another step by the community to hold the city accountable for its response to the recent events,” noting that the mayor had already requested reviews from the Office of Police Accountability and the city's inspector general.

“It is fitting that it lifts the voices and experiences of Black Lives Matter and longtime civil rights leaders,” Kamaria Hightower, a spokeswoman for the mayor, said in a written statement. “From the onset, the Mayor has been clear that she believes that people are righteously marching to fight systemic racism.”

Among the five named plaintiffs in addition to the Black Lives Matter organization is Abie Ekenezar, an Army veteran who has asthma and a spinal injury, and who said she developed a daylong cough after being exposed to tear gas during a protest May 30. She wants to attend further protests, but uses a scooter to get around and fears her limited mobility places her especially at risk from tear gas, the complaint said.

Another is Sharon Sakamoto, a Japanese-American woman who survived internment as a child during World War II. Sakamoto, a retired attorney, was frightened off from participating in the protests after she learned police were using chemical irritants, it said.

The lawsuit seeks an order blocking the Seattle Police Department and other agencies that are supporting it from continuing to use the less-lethal and chemical weapons on the protesters.