Blue Jays OF says team may play in Pittsburgh or Baltimore 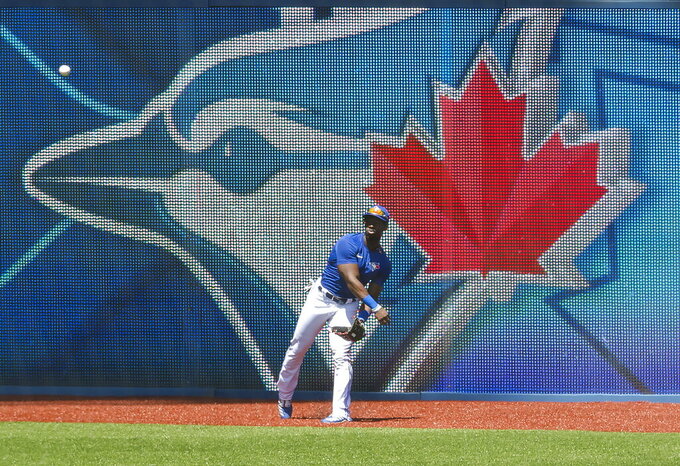 TORONTO (AP) — The Blue Jays’ front office has told its players that Pittsburgh and Baltimore are possibilities for where team will hold home games this year after Canada’s government barred the club from playing in Toronto amid the coronavirus pandemic, outfielder Randal Grichuk said Tuesday.

Canada denied the Blue Jays’ request to play at Rogers Centre because the regular-season schedule would require frequent travel back and forth from the United States, where COVID-19 cases are surging. The other 29 major league teams plan to play the pandemic-shortened, 60-game season in their home ballparks, without spectators.

Toronto begins the season at Tampa Bay on Friday and is scheduled to play its first home game on July 29 against the defending champion Washington Nationals.

Grichuk said the players want to play in a major league stadium but have also been told their Triple-A affiliate in Buffalo, New York, is a possibility.

“To this moment I’ve heard not a definite place to play yet. It’s kind of still up in the air. Which is crazy this close to opening the day. Luckily we start on the road. But yeah, that’s what we’re hearing. Possibility Pittsburgh or Baltimore. Worst case, Buffalo.”

Grichuk said the players want the amenities that come with a major league ballpark such as the hot and cold tub and big league level weight and training rooms.

“If we have to go (to Buffalo) we’d go there obviously, but we would love to be in a big league ballpark and have all that that comes with that,” he said.

"It’s going to be a messed up year all around. Do I think that would will make things tougher, I do. But it's something we got to roll with this year and hopefully things get back to normal in 2021."

Pirates President Travis Williams confirmed the talks with the Blue Jays on Monday and sounded ready to welcome club if it could be done safely amid the pandemic.

Blue Jays general manager Ross Atkins said the team has more than five contingency plans and was in talks with other clubs. He has declined to name them.

Atkins said if the Blue Jays can’t find a major league park, their Triple-A affiliate in Buffalo would be their most likely site for home games.

The team had been considering playing home games at its spring training facility in Dunedin, Florida, but that is among the states that are virus hot spots.