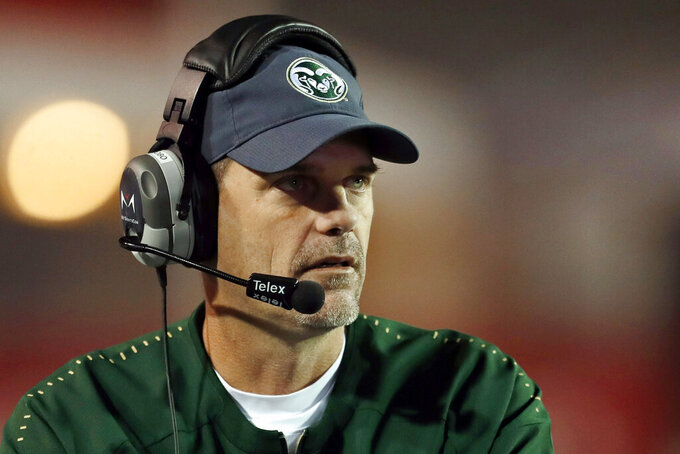 FILE - In this Oct. 11, 2019, file photo, Colorado State coach Mike Bobo watches from the sideline during the second half of an NCAA college football game against New Mexico in Albuquerque, N.M. First-year South Carolina assistant Mike Bobo said Thursday, Aug. 20, 2020, he was offended by allegations that anyone on his former Colorado State staff or team say they were abused or treated with racial insensitivity. Bobo had been Colorado State's coach the past five years before getting hired at South Carolina last December. (AP Photo/Andres Leighton, File)

COLUMBIA, S.C. (AP) — First-year South Carolina assistant Mike Bobo said he was offended by allegations that anyone on his former Colorado State staff or team say they were abused or treated with racial insensitivity.

“I know who I am and how I treat people,” said Bobo, the Gamecocks new offensive coordinator.

Bobo had been Colorado State's coach the past five years before getting hired at South Carolina last December.

Earlier this month, Colorado State administrators paused football workouts after an ongoing investigation was launched by the president of the university into the program’s handling of COVID-19 cases uncovered allegations of racism and verbal abuse toward athletes.

South Carolina had begun its own review after becoming aware of the allegations, but it's unclear where their inquiry stands.

Colorado State athletic director Joe Parker said he asked President Joyce McConnell to expand the investigation she announced on Aug. 5 to include a comprehensive review of the athletic department and football program.

“We learned of some extremely troubling allegations of racism and verbal abuse from CSU’s athletic administration generally and in the football program specifically,” Parker said.

“I take offense that anybody that was a member of my team or coaching staff or support staff said that they were treated racially insensitive or there might have been abuse," Bobo said. “One thing I can say is we were a family there. We loved each other and I can honestly say I treated people like I would like to be treated, like I would want them to treat my children.”

Colorado State spokesman Mike Hooker said the investigation is continuing and not likely to be completed until September. It is being handled by the same attorneys who investigated Iowa earlier this year when that football team’s culture was questioned by players and others.

Bobo would not say if he spoke with anyone connected to the Colorado State investigation.

“I’ve been transparent with people who’ve have asked me,” he said. “I’ve got nothing to hide.”

South Carolina athletic director Ray Tanner began an inquiry soon after Colorado State's investigation. Bobo said he was open and honest when questioned by Tanner and other department administrators.

Soon after Bobo's name came up at Colorado State, he received support from many past associates and former players, including his former coach at Georgia in Mike Richt.

Richt said on social media that during Bobo's 14 seasons on the Bulldogs' staff, “I cannot remember receiving one complaint from a parent, high school coach or, more importantly, a student athlete about how he was treated by Mike.”

South Carolina coach Will Muschamp has discounted reports of Bobo being abusive or racially insensitive at Colorado State.

“Those claims to me are completely absurd,” Muschamp said Monday.

Tanner has said his athletic department has had no complaints regarding Bobo's conduct since joining the staff. Bobo received a two-year contract at South Carolina worth $1.2 million per season.

Bobo was brought in to re-energize an offense that was near the bottom of several categories in the Southeastern Conference. The Gamecocks were 10th in rushing last season, 11th in scoring and 12th in total offense.

The new offensive coordinator said he and his family have received overwhelming support from friends, former players and colleagues that has heartened him as he continues fall camp. South Carolina starts its season Sept. 26 at home against Tennessee.

“I’m ready to focus on coaching,” he said.

One thing he has realized through this is he'd like to improve at all his does, professionally and personally.

“When you read what others have said, Bobo noted, “you realize you've done some good things, but you can do better."