From booze to balloons, a wide range of legislative action 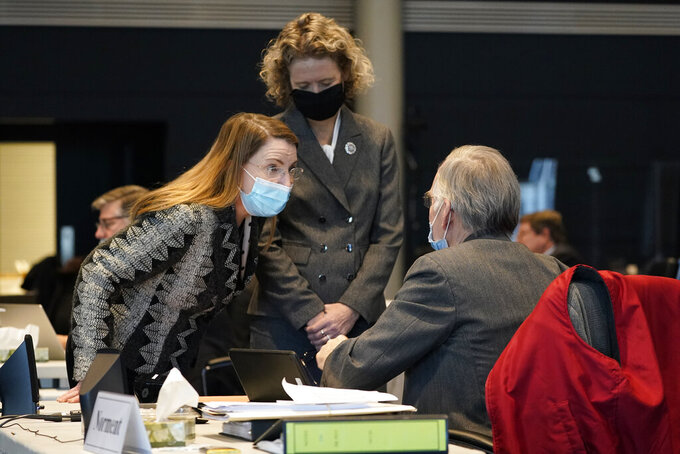 RICHMOND, Va. (AP) — From higher fines for littering to a ban on releasing nonbiodegradable balloons, Virginia’s General Assembly has approved a collection of bills that will impact consumers.

Some of the bills seek to address issues that have cropped up or become more pressing because of the coronavirus pandemic, including legislation that will allow restaurants to continue to offer cocktails to go. Another bill phases out the use of polystyrene food containers by July 1, 2025, but allows localities to grant consecutive one-year exemptions to food vendors who face undue economic hardship, as many restaurants continue to rely on takeout service to survive while the pandemic drags on.

Lawmakers aimed to get Virginians to think twice before tossing trash on the ground, voting on a bipartisan basis to double the fine for littering.

The bill’s sponsor, Republican Del. James Edmunds, R-Halifax, called the measure an attempt to bring attention to a problem he contends is getting worse.

Edmunds, who said he adopted a stretch of highway to clean up about 25 years ago, told a subcommittee he’s seen more litter strewn about since the start of the pandemic than ever before. He theorized that more people might be eating in their cars and then just tossing their trash out the window.

“If you ride through especially rural Virginia, it is atrocious. And there’s no excuse for it,” he said.

The General Assembly passed a bill that prohibits food vendors from using single-use expanded polystyrene containers. The bill introduced by Del. Betsy Carr passed last year, but it included a reenactment clause that requires it to be passed in two consecutive years.

When lawmakers began to debate the legislation this year, they were faced with a new reality. Many restaurants devastated by the pandemic have come to rely on takeout business to survive, and nonbiodegradable polystyrene containers have become more prevalent.

The legislation requires certain chain restaurants to stop using expanded polystyrene containers by July 1 , 2023. All food vendors must stop using them by July 1, 2025.

The bill includes a civil penalty of up to $50 for each day of violation. It also includes a process for localities to grant consecutive one-year exemptions to individual food vendors if they face undue economic hardships.

During a Senate debate on the bill, some senators questioned the wisdom of passing the ban as restaurants continue to struggle during the pandemic.

“It’s going to hurt small business and it’s going to do it for no reason whatsoever," Sen. Mark Obenshain said of the proposed ban.

The Virginia Mercury has reported negotiations involving a separate bill dealing with advanced recycling - or chemical recycling - helped the ban pass, something Sen. Chap Petersen referred to as “The Great Polystyrene Compromise of 2021.”

There may not be as many balloons going up, up and away over Virginia.

Lawmakers approved legislation that would ban the intentional release of all nonbiodegradable balloons. Violators face a civil fine of $25 per balloon.

The measure was backed by environmentalists and residents who live along the state’s shoreline. Supporters cited the litter from foil and latex balloons on beaches and the potential harm to marine animals by ingesting balloon remnants.

Some Republican senators questioned whether it went too far by prohibiting the outdoor release of even a single balloon.

Sen. Jen Kiggans, R-Virginia Beach, who sponsored similar legislation last year, said releasing nonbiodegradable balloons outdoors is a form of littering. She said officers will not be “standing around bouncy houses and at birthday parties” trying to catch people in the act. The bill applies to people ages 16 and over.

Current law prohibits the release of 50 or more balloons within an hour and carries a civil penalty of $5 per balloon.

Lawmakers loosened the state’s ABC laws in a couple of ways aimed at helping businesses and local governments recover from the impacts of the pandemic.

One measure would allow distillers and restaurants to continue offering cocktails to go. That’s been allowed for a while under an executive directive Gov. Ralph Northam issued in April. But the new legislation would allow sales to continue even if the governor’s executive order declaring a state of emergency due to the pandemic expires.

The bill would allow a limit of two cocktails per meal and a total of four maximum, said Eric Terry, president of the Virginia Restaurant, Lodging & Travel Association.

He said the to-go provisions have been a “lifeline” for restaurants during the pandemic, when some customers have been reluctant to dine indoors.

The bill as passed would sunset on July 1, 2022. Terry said he hopes lawmakers might extend it in the future.

The bill expands a code section that previously dealt with special events. It will allow localities to seek approval from the state ABC board for an “outdoor refreshment area license.”

Justin Wilson, the mayor of Alexandria, said the city has long advocated for loosening the state's historically stringent ABC laws and was pleased to see both measures pass.

“We can manage the public safety and quality-of-life impacts, and it helps businesses and helps contribute to the vitality of the community,” he said.

An earlier version of this report erroneously reported that Styrofoam would be prohibited. The bill will ban food vendors from using single-use expanded polystyrene containers, not Styrofoam.