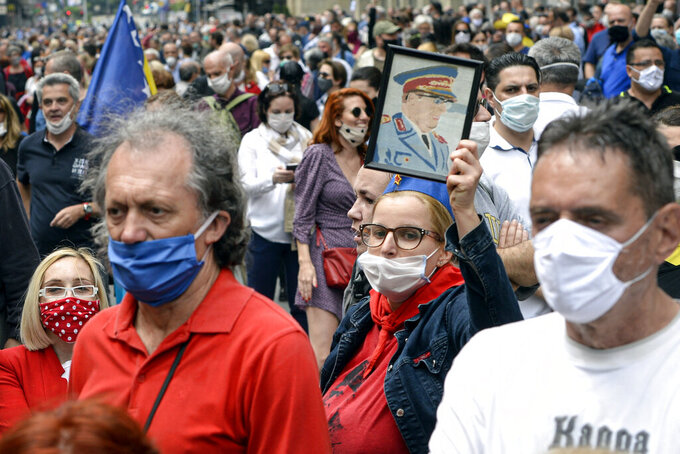 A woman holds a portrait of Yugoslav leader Josip Broz Tito, as people attend an anti-Nazi protest outside the Sacred Heart Cathedral during a mass commemorating members of the pro-Nazi Croatian WWII Ustasha regime, responsible for sending tens of thousands of Serbs, Gypsies and Jews to their death in concentration camps, who were killed at the end of WWII by Yugoslav communist troops, in Sarajevo, Bosnia, Saturday, May 16, 2020. Bosnian Catholic clerics along with Croatian state representatives and members of the Bosnian Croats community attended a religious service commemorating the massacre of Croatian pro-Nazis by victorious communists at the end of World War II. (AP Photo/Kemal Softic)

SARAJEVO, Bosnia-Herzegovina (AP) — Thousands of Bosnians, many wearing masks, demonstrated Saturday against a Mass in Sarajevo for Croatia’s Nazi-allied soldiers and civilians killed by partisan forces at the end of World War II.

The Mass in Sarajevo was a replacement for a controversial annual gathering usually held in Bleiburg, Austria, which was canceled due to restrictions imposed by the coronavirus pandemic. Another small replacement event took place Saturday at a cemetery in Zagreb, Croatia.

The decision to hold the Mass in Sarajevo provoked a strong backlash in a country where the memory of ethnic war in the 1990s is still fresh. It was condemned by Bosnia’s Serbian Orthodox Church, the Jewish and Muslim communities and several antifascist organizations.

Protesters, many wearing masks, walked through the city singing anti-fascists songs and holding up photos of resistance members who were tortured and killed by Nazi-allied Croatian forces during their rule over Sarajevo during World War II.

Zvonimir Nikolic, a 57-year-old economist, called the Mass a “disaster for Sarajevo.”

“Sarajevo is among a few cities in the world where this mass should never be held because the regime it commemorates committed monstrous crimes in Sarajevo," said Nikolic, who is Catholic.

Protesters were prevented by police from reaching the Sacred Heart Cathedral, where the Mass was led by the highest-ranking clergyman of the Catholic Church in Bosnia, Archbishop Vinko Puljic.

Protesters described the Mass as a thinly veiled attempt to rehabilitate the pro-fascist nationalist movement brought to power in Croatia by Nazi German forces when they occupied Yugoslavia in 1941.

Their protest was one of the largest religiously and ethnically mixed antifascist gatherings in Bosnia in over two decades.

“This is a horrifying farce. Sarajevo and Bosnia-Herzegovina do not deserve this,” said Sead Sahovic, a Muslim protester who was born in the Stara Gradiska concentration camp, which was run by Croatian soldiers during the war.

Bosnia’s Catholic Church says the Mass honored all innocent victims of the war and postwar era, including all those killed without trial.

Croatian forces oversaw the Holocaust in Sarajevo, resulting in the murder of more than 7,000 of the city’s 10,000 Jews. Tens of thousands of Serbian, Roma, and Bosnian and Croatian anti-fascists were also sent to death camps.

For Croatian nationalists, the annual Mass symbolizes their suffering under communism in the former Yugoslavia. However, in recent years, Croatia has increasingly been criticized for historical revisionism. The annual Mass in Bleiburg, as well as the one in Sarajevo on Saturday, was held under the tutelage of the Croatian parliament.