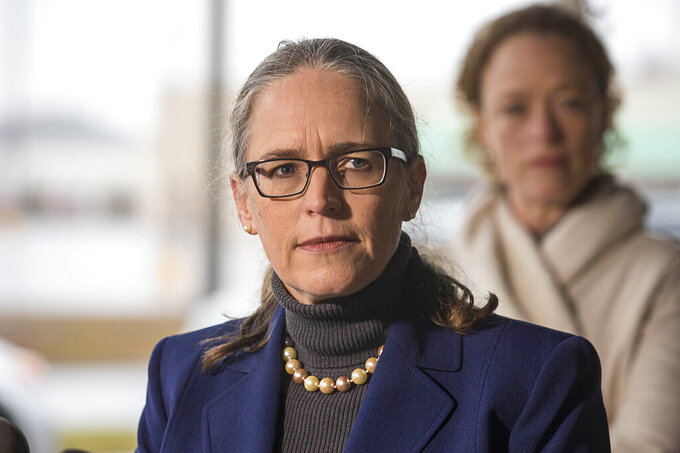 FILE - In this Nov. 12, 2018 file photo, Carolyn Bourdeaux, Democratic Nominee for Georgia's 7th Congressional District, displays a Gwinnett County absentee ballot as she speaks during a press conference outside of the Gwinnett County Board of Voter Registration and Elections in Lawrenceville, Ga. The Democratic primary in Georgia’s 7th Congressional District is too close to call after new vote counts showed a runoff may not be required in the suburban Atlanta district. Carolyn Bourdeaux had 50.5% of the vote as of Saturday afternoon, June 13, 2020, but the race remains too close to determine a winner. (Alyssa Pointer/Atlanta Journal-Constitution via AP, File)

ATLANTA (AP) — A Democrat is declaring victory in Georgia's 7th Congressional District primary after new vote counts showed her winning a majority of ballots without need for a runoff election.

Carolyn Bourdeaux, who was the Democratic nominee in 2018, claimed victory Monday over five Democratic opponents.

“I got into this race because we must restore the basic promise that the leaders we send to Washington will work to heal what divides us, will actually solve our problems,” Bourdeaux said, citing priorities including healing racial divisions, expanding health care and recovering from COVID-19.

A university professor, Bourdeaux fell fewer than 500 votes short of defeating incumbent Republican Rob Woodall in the suburban Atlanta district in 2018. Woodall isn't running again in the district covering parts of Gwinnett and Forsyth counties. Republicans nominated emergency room physician Rich McCormick with a majority of votes in a seven-candidate GOP field. He beat state Sen. Renee Unterman and others, backed in part by the free-trade, anti-regulation Club for Growth.

Bourdeaux wasted no time in attacking McCormick, saying it's “ridiculous” that he was funded by a “single corporate special interest PAC that bought him a place in this election.” She also said McCormick is the wrong choice for the district because of his support for dismantling former President Barack Obama's healthcare overhaul and his support for President Donald Trump and the“racism, anti-immigrant, sexist policies and words that are coming from our president that are tearing our country apart.”

McCormick spokesman John Simpson, on the other hand, sought to link Bourdeaux to national Democrats.

“Dr. McCormick looks forward to showcasing how his 20 years in the Marines and service on the frontlines of the COVID-19 fight shape his vision of the American Dream and contrast that with socialist ideas of Nancy Pelosi, Alexandria Ocasio Cortez and Carolyn Bourdeaux," Simpson wrote in an email.

More Democrats than Republicans turned out in the primary elections in the district, which Bourdeaux says is a sign of gathering Democratic strength in a district that was once a Republican stronghold.

In Georgia, candidates must win more than 50% of the vote to avoid a runoff. The Associated Press initially declared Bourdeaux and state Rep. Brenda Romero as advancing to a runoff. Bourdeaux was receiving 46.2% of the vote at the time, with 92% of precincts reporting.

But Bourdeaux did significantly better in large numbers of absentee votes counted later in the week, and surpassed the 50% threshold as Gwinnett and Forsyth counties released updated results.