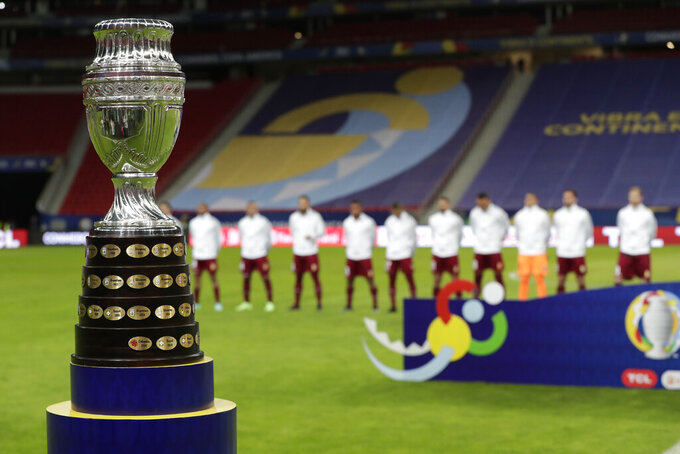 The Copa America trophy is placed on the field prior to the opening match between Brazil and Venezuela at National Stadium in Brasilia, Brazil, Sunday, June 13, 2021. (AP Photo/Eraldo Peres)

SAO PAULO (AP) — Brazil’s health ministry raised the number of COVID-19 cases related to the Copa America to 52, including 33 players or staffers.

The ministry said Tuesday that the increase, from 41 total cases earlier, includes 19 workers hired for the tournament.

Some of the workers are located in Brasilia, where Brazil opened the tournament on Sunday with a 3-0 win over Venezuela, and others in Rio de Janeiro, which hosted Monday’s 1-1 draw between Argentina and Chile.

The Venezuela squad was depleted after nearly a dozen cases of COVID-19 involving players or staff. Bolivia was missing three players.

Bolivian media reported striker Marcelo Martins was one of the players who tested positive. Martins criticized the South American soccer body for the outbreak.

“Thank you for this, CONMEBOL. It is completely your fault,” Martins said on Instagram. “If someone dies what will you do? What matters to you is money. The lives of players are not worth anything.”

Staffers of Peru, Colombia, and Bolivia also tested positive for the virus.

CONMEBOL had earlier defended its actions.

“Copa América 2021 was not made ‘in a rush,' which would be impossible. It took more than a year of intense organization, mobilization of financial, human and technical resources in all of the continent," it said Sunday.

The ministry said 3,045 tests have been conducted so far.